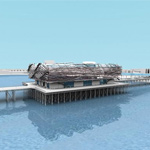 Nemetschek Vectorworks, Inc. and MAXON Computer GmbH are teaming up to present the Inspired Visions Global Rendering and Animation Competition. The contest is open to all professional and student designers, and is accepting entries for three categories: rendering with CINEMA 4D, animation with CINEMA 4D, and rendering with Renderworks 2011. (CINEMA 4D entries must be built on a Vectorworks model.) All renderings and animations will be posted on the competition website, and a prize will also be awarded to the “Fan Favorite” entry as determined by votes from the public.

The winners of each category will receive a $2,500 USD Visa gift card, and be included in an official media announcement as well as being featured on Nemetschek Vectorworks’ Planet Vectorworks news site and both companies’ social media channels including Facebook, Twitter and YouTube.

“We are thrilled to continue our partnership with MAXON Computer through this competition,” said Stewart Rom, Chief Marketing Officer at Nemetschek Vectorworks. “The addition of the CINEMA 4D render engine has dramatically improved the capabilities of Renderworks and we’re excited to see what our users submit as entries.”

“We want to encourage as many Vectorworks/Renderworks and CINEMA 4D users as possible to create exciting visualizations and renderings for submission,” adds Friederike Bruckert, Director of International Sales and Marketing, MAXON Computer GmbH. “This is an excellent opportunity for architects and designers from around the world to showcase their skills and we look forward to seeing their fantastic work.”

To enter, vote or learn more about the competition, visit inspiredvisions.vectorworks.net.