In case you missed out on the live Twitter and Facebook coverage by our intrepid Editor-in-Chief Tom McLean from the Oscars press room, we are pleased to announce and congratulate the key animation and vfx winners of the 88th Annual Academy Awards.

Best Animated Feature went to Pete Docter and Jonas Rivera for Inside Out, while Chilean filmmakers Gabriel Osorio and Pato Escala took the Best Animated Short prize for the heartrending Bear Story. And the break-out indie sci-fi hit Ex Machina delivered gold in the Visual Effects category for Andrew Whitehurst, Paul Norris, Mark Ardington and Sara Bennett — the first woman to win in the category in over 20 years.

“I will say primarily what we were after was entertainment and fun, and then as we got in there we realized this has something very deep and applicable to every human being. And the weird thing about emotions are they’re completely invisible to us most of the time. We know we feel angry, but we don’t stop and really rationalize what’s driving all of that, and so this film has the potential to help people kind of unpack and think about some of these things that they don’t normally,” Inside Out director Pete Docter told reporters backstage. “We have heard from a lot of folks, teachers, especially parents of special needs kids who have said this film has given them a new vocabulary to talk about emotions for the first time, and that is nothing we were aiming for, but it is such an amazing byproduct of the movie. And we’re so thankful that we are able to contribute in that way.”

“We are really happy right now,” said Bear Story director Gabriel Osorio, taking the stage to accept the Short award. “We want to thank the Academy, our families and everyone in Chile that have supported us and trust in our work. Personally I want to dedicate this achievement to my grandfather, who is the one who inspired this story and to all the people like him who have suffered in exile. We really hope that this must never happen again. Thanks.”

“Thank you all. We are from a small country called Chile. This is the first Oscar for our country, so this is very important for us,” added producer Pato Escala. “Thank you all. Un gran aplauso para todos. Viva Chile!“

Another vfx industry favorite, The Revenant, received both the coveted Best Director award for Alejandro Inarritu and the Cinematography honors for Emmanuel Lubezki … Oh, and the long-awaited first Oscar for Leonardo DiCaprio. 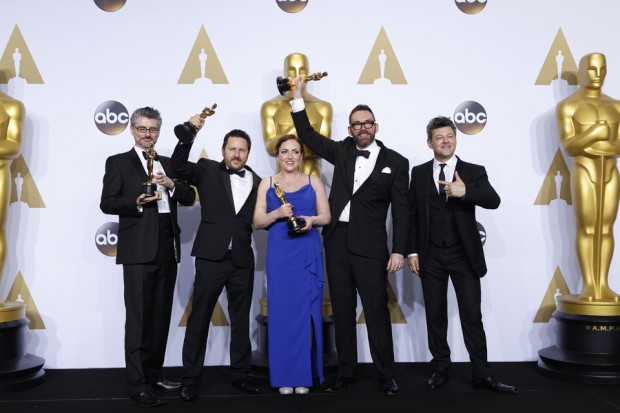