Our reporter zeroes in four toons that represent the rich diversity of talent spotlighted at the Annecy Festival this year.

Anyone looking for a panorama of the modern animation scene will find it in the short film category at Annecy this year. The 52 selected shorts reflect both the multi-cultural backgrounds of their makers and a notably broad definition of animation itself. From graphic art pieces to twisted toons, Annecy’s short film program presents a truly diverse picture of the styles and techniques that comprise contemporary animation. No sampling of selected films could possibly be representative of the category as a whole, but some entries stand out for the distinctive voices they present: 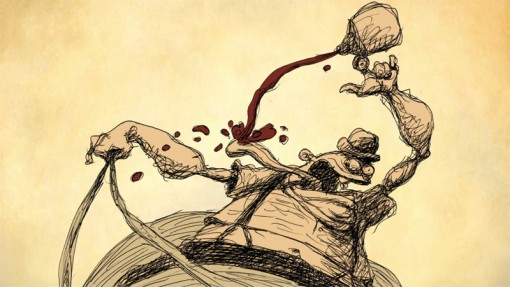 Drunker than a Skunk

Drunker than a Skunk

The doggedly independent New York animator Bill Plympton makes Annecy’s list with his visualization of a “cowboy poem” by the irreverent U.S. poet Walt Curtis. Plympton’s kinetic drawing style is an ideal foil for Curtis’ reading of “Drunker Than A Skunk,” which chronicles a Wild West showdown in 3/12 minutes’ time.

“It’s basically an old Western shoot-’em-up,” explains Plympton. “Everybody in the town hates this drunk–even little kids and dogs and prostitutes. They all shoot at this guy. It’s about the edginess of cowboy life taken to extremes,” he deadpans. “It doesn’t end well.”

Plympton, who has twice won feature prizes at Annecy, surmises that Drunker than a Skunk may have appealed to the French affection for American cowboys.

“They love that frontier mythology, and Clint Eastwood and John Wayne.” He notes, however, “It’s not a joke film like my usual stuff. It’s a little more avant garde, and it pushes the limits of what animation can be. That may be why they liked it.”

But Plympton also knows what it feels like to miss the cut at Annecy, and he’s reaching out to also-ran animators by organizing an alt-screening called Annecy+.

“Annecy+ is in its eighth year now, and we’re moving to a larger venue. We’ll have a big screen against a prison wall and live music. People will have an opportunity to get their films seen and get drunk watching movies.”

Plympton will hold two master classes at Annecy as well. The festival provides a perfect platform to preach his gospel that animators can make a living making shorts.

“Young artists want to know how I make money on my films, and I give them Plympton’s Dogma, which is: ‘Make it funny and you’ll make money!'” 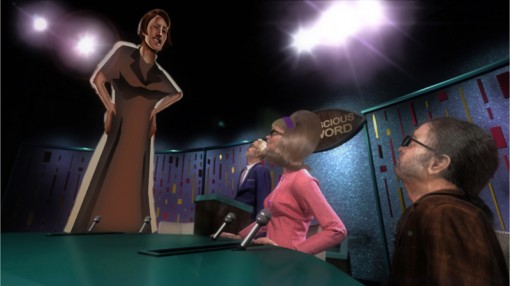 Toronto-based filmmaker Chris Landreth has become known for pushing 3D-CG character animation into new terrain, and his latest release through the National Film Board of Canada extends that reputation. With Subconscious Password, the director of the Oscar-winning short Ryan takes viewers on a wild ride inside one man’s mind. As the protagonist struggles to recall the name of someone he’s supposed to know, the workings of the man’s subconscious play out like a surreal version of the 1960s TV game show Password. Celebrity guests like Sammy Davis Jr., Yoko Ono and Dick Van Dyke play alongside James Joyce, William S. Burroughs and Salvador Dali (who melts, of course).

Working mainly in Autodesk Maya, Landreth manipulated vintage TV footage for some characters and generated others in 3D-CG.

“A lot of the characters look really, really cheap,” he laughs. “Ayn Rand, for example, is a paper cut-out character who is animated in the style of Clutch Cargo.”

Despite the “inside animation” humor, Landreth’s film has a point to make about photoreal character animation.

“I’m playing around with the uncanny valley. But I’m not trying to fool the audience into thinking this is photorealism. They won’t get the feeling that these characters are ‘moving corpses’ trying to be human beings.”

To produce the 11-minute film, Landreth led a team of graduate animators from Toronto’s Seneca College, a strategy he’s used before. But in an ambitious move beyond his past work, he also employs stereoscopic effects in Subconscious Password, using the Sandde system developed by IMAX and the NFB. The Annecy audience will see a specially cut stereo version containing French subtitles overseen by Landreth.

“It will be screened,” cracks the director, “in blazing 3-D.” 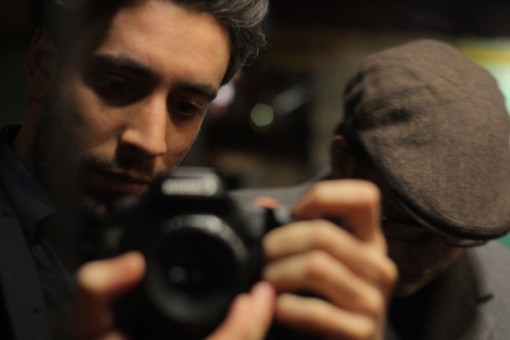 Another stereoscopic short chosen for Annecy came from a most unexpected place: the radio archives of Monty Python. The quintessentially British humor of Pythons Eric Idle, Terry Jones and the late Graham Chapman provides the soundtrack for a wry stop-motion short about a school auditorium version of a talent show audition.

It was sheer chance that the unreleased Python radio sketch was uncovered, and came to the London studio of Asylum Films.

“To be presented with a previously unheard sketch such as this seemed too good an opportunity to pass up,” recalls director Ben Falk. “Converting the sketch into a film was a hard task. Timings and audio cues are very different over the two mediums and were quite difficult to communicate to the audience. We talked about tweaking them, but who are we to mess with such genius comic timing?” (One can only hope that Annecy’s French translators were also Python fans.)

“Never before had we tackled stop-motion on this scale,” notes Wood. “The characters and environments were constructed using a blend of traditional techniques, including foam latex molding and the latest rapid-prototyping technologies. In addition, we were shooting stop-motion animation in stereoscopic 3-D, which required a learning curve in itself.”

“We only had one bulb blow and we finished ahead of schedule, though one character armature did ‘die’ during the final shot and had to be held together with camera tape to complete the final frames!” 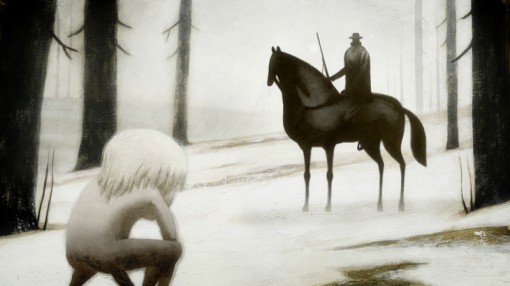 The mythology of the “wild child” raised by wolves has inspired countless artists, but Daniel Sousa has used mixed-media animation to create a poignant meditation on what it means to be “civilized” at all. With an audio track that’s a haunting mix of music and atmospheric sound effects, Feral follows a boy who is rescued from the wilderness and tries to cope with the ways of human animals.

“I wanted a visceral, organic quality to these characters, as if you could see inside them,” says Sousa. “So I came up with a way of using painted textures inside of masks that are hand-drawn. I did rough animation in Flash, and then each frame was very lightly printed on paper and re-traced in pencil to get a natural, organic line quality. They were filled in with painted textures that I had scanned separately.”

Since Feral runs for 13 minutes, this painstaking process seems especially remarkable. But thanks to a grant from the Creative Capital Foundation, Sousa could take time off from teaching character animation at the Rhode Island School of Design to finish the film. A group of 10 student interns helped bring the multi-year production of Feral to a close, but Sousa admits…

“I did the bulk of the film before I even started thinking about getting help. I always feel like I’m reinventing the wheel with every film I make.”

Five Things You Have to Do at Annecy This Year
Meet the New Annecy Director!