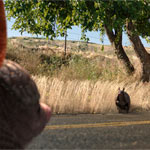 Portland, Oregon-based animation studio HouseSpecial and director Kirk Kelley have launched a new short about the love life of one of America’s odder creatures, Armor del Amor. The scripted send-up of nature documentaries follows the dangerous and largely misunderstood mating ritual of the nine-banded armadillo (or, Dasypus novemcinctus) and exposes the dark reality of modern dating in the animal kingdom.

Armor del Amor is currently screening at the Portland International Airport through July as part of The Hollywood Theatre’s microcinema, sharing locally made films 24/7 on Concourse C. It recently ran at the Northwest Animation Festival’s Animators Showcase.

“Our short film is an homage to nature shows like Mutual of Omaha’s Wild Kingdom. In reality, we are all just animals looking to find a connection. I wanted to explore how far removed we’ve become from unscripted mating rituals in everyday life. Since Match.com launched in 1995, dating has dramatically evolved… or de-evolved, depending on your POV,” said Kelley, who grew up in rural Texas. “The biggest challenge was finding a location in Oregon that looked enough like Texas to work for the film.”

Putting Miss Armadillo on the Market
Finding their little slice of the South in Dufur, Oregon (near the Eastern Columbia River Gorge), the next challenge was creating the lovelorn female armadillo who stars in the piece. Kelley, who is also the Supervising Creative Director behind 20 years of M&Ms content, and HouseSpecial’s CG team designed, modeled, animated and composited this photoreal varmint using Nuke, Flame, PTGui, Maya with Arnold, Houdini, Mari, Substance Painter, ZBrush and Mudbox. Layered renders and special techniques for character embedment into live footage were used.

intricate cracks and crevasses,” noted CG Texture Artist Nikie Monteleone. “I ended up using a plethora of textures from turkey and pig skin to tree bark and rugged rocks, plus even a few snapping turtle tongues, to produce the final textures.”

The armadillo also provided a movement challenge which required some research to tackle, according to CG Animator (and fellow Texan) Beavan Blocker: “It’s important to actually understand the locomotion of a creature before it’s rigged, otherwise the rig may not allow the animators to get the naturalistic motion that you want. Armadillos are very restrained in their body movement. They sort of rotate from their hips without a great deal of body flexibility, which can make it hard to get dynamic movement when you want it.”

The visual effects department also had to think outside the box, as VFX Supervisor Rex Carter showed with his forward-thinking approach to the initial live shoot:

“As we captured the live action footage, I knew it would be a challenge to sync and integrate the natural environment, (like grass, scrubs and leaves), with the CG armadillo. We took a blue screen with us to shoot elements individually and I then composited them into the shot with the final animation. We harvested samples of the various grasses and plants and brought them back to the studio to have on-hand for comp reference.”

The original soundtrack for Armor del Amor was composed and performed by Death Cab for Cutie guitarist & keyboardist Dave Depper. “This was a fun project for me as I rarely have the opportunity to be involved in the creation of primarily acoustic-based music. To prep I listened to a lot of Ry Cooder and Jimmy Page, as I wanted to record the guitar part in a non-traditional DADGAD tuning, which Page was fond of utilizing in his Led Zeppelin days. I also tried to imagine what Morricone would have done.”

Depper continued, “The rhythm guitar part was played on an old Martin D-28 that Ray LaMontagne gave me after our tour was done. It’s probably the nicest guitar I own. The slide parts were done on a newer Fender parlor acoustic. There’s also a bit of gentle synthesizer droning going on in the background.”

The short’s narrator was British-born voice actor and radio host Edmund Stone. Though he as a first-time collaborator with HouseSpecial, director Kelley has been a fan of his syndicated movie music show The Score and had been looking for a project that would fit. Stone provides an authoritative voice-over reminiscent of traditional nature docs. He has previously performed for commercials, films, and can be heard on more than 1,000 e-books.

“This was a labor of (twisted) love from our entire crew, who all got a crash course in ‘why the armadillo crossed the road!’ And while our paramour wasn’t fully successful, our artists created a lovely piece of filmmaking,” said Hammack.

Kirk Kelley has directed and supervised many of the studio’s ad campaigns since 1995, and enjoys working on short films as well. The Texas native, who holds advanced degrees in visualization sciences and architectural design and a degree in engineering, is also known around town as the co-owner of popular BBQ spot Podnah’s Pit and the Tex-Mex bar next door, La Taq. He is also a proud new dad.

The nine-banded armadillo is the only species native to the US. Mainly insectivores, they live an average of 7-10 years and weigh between 8-18 lbs. (but don’t ask about that on a date). 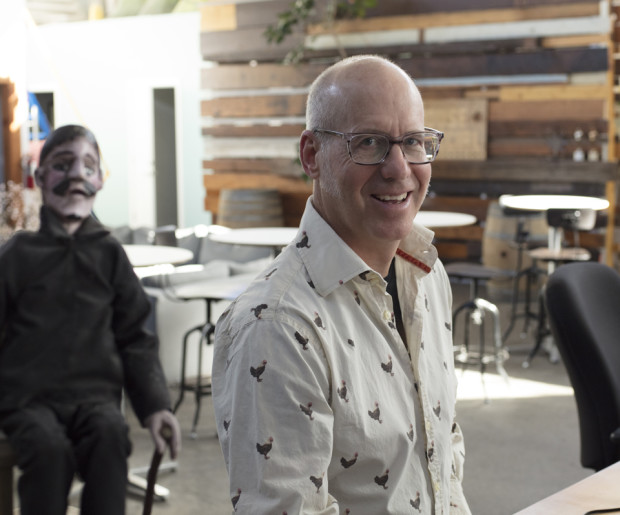