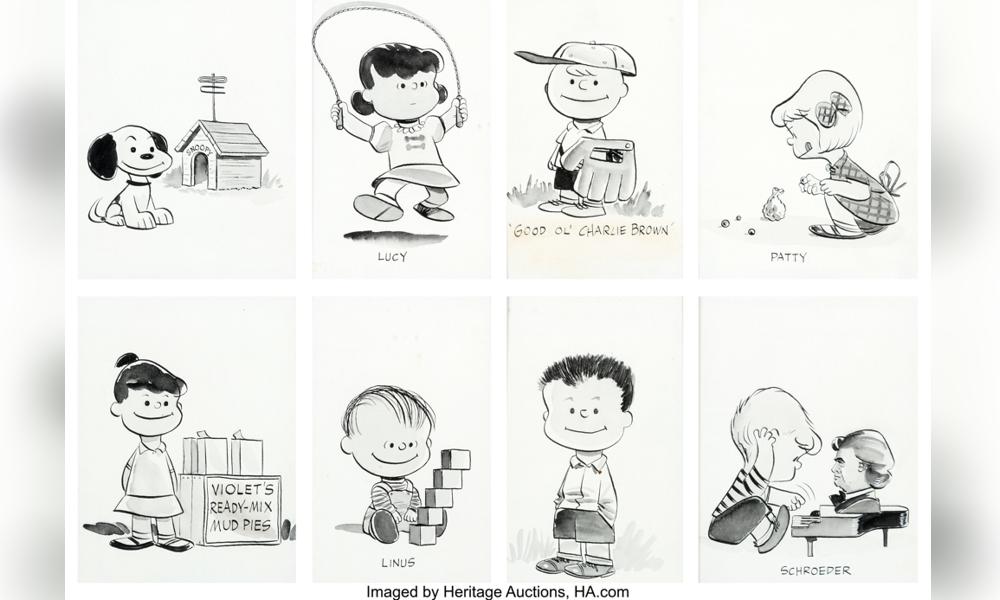 At this late date one would think there’s little left to surprise about the work of Charles Schulz. His illustrated offspring have been ubiquitous in our hearts and minds almost since the first Peanuts strip appeared in newspapers in October 1950 and spread quickly from a handful of papers to 350 million readers worldwide. Thanks to museums and merchandising, animation specials and auction events, hardback celebrations and paperback collections, one just assumes we’ve seen all that The Man Called Sparky created 70 years after A Boy Named Charlie Brown weathered his first indignity.

But in its Dec. 11-13 Animation Art event, Dallas-based Heritage has one of the earliest-known Peanuts pieces drawn by Schulz: the artwork made in 1953 for a promotional giveaway almost entirely lost to history.

These gorgeous drawings of Lucy, Linus, Snoopy, Schroeder, Patty, Violet, Shermy and Good Ol’ Charlie Brown were made for a newspaper freebie titled “The Peanuts Album,” and have never been seen in public or available at auction. Instead, they have resided with a longtime collector, who wishes to remain anonymous but is now ready to let someone else cherish these lovingly rendered portraits of eight comic-strip characters who feel like family.

“When I first saw it, I almost fell down,” says Jim Lentz, Heritage Auctions’ Director of Animation Art. 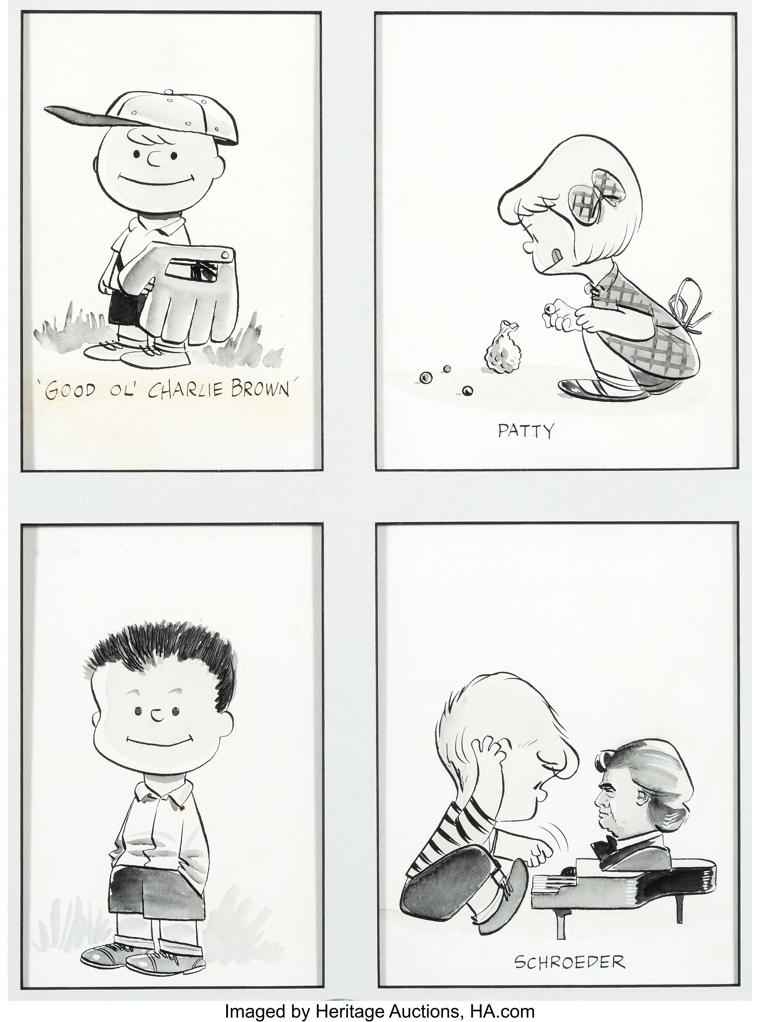 In the portraits, Charlie Brown wears his baseball cap and sports his oversized baseball glove. Lucy skips rope. Linus, without his blanket, stacks blocks. Schroeder plays his piano adorned with a bust of his beloved Beethoven. Violet stands ready to sell her Ready-Mix Mud Pies, while Patty, chewing on her tongue, shoots marbles. Shermy stands with hands in pockets, smiling. And Snoopy rests beside his doghouse to which he has affixed a television antenna.

Schulz’s “drawings were but scribbles, a few lines scarcely more elaborated than children’s stick figures,” newsman Walter Cronkite wrote in his introduction to The Complete Peanuts: 1953 to 1954, “but his genius was such that with those short few lines he created a panorama of life’s experiences suffered, or enjoyed, or tolerated by the inhabitants of a cartoon village.”

These eight portraits are quintessential Charles Schluz – “a kind of Holy Grail of his artwork,” Lentz says. “I knew instantly it was one of the most important pieces of Schulz art to surface.” 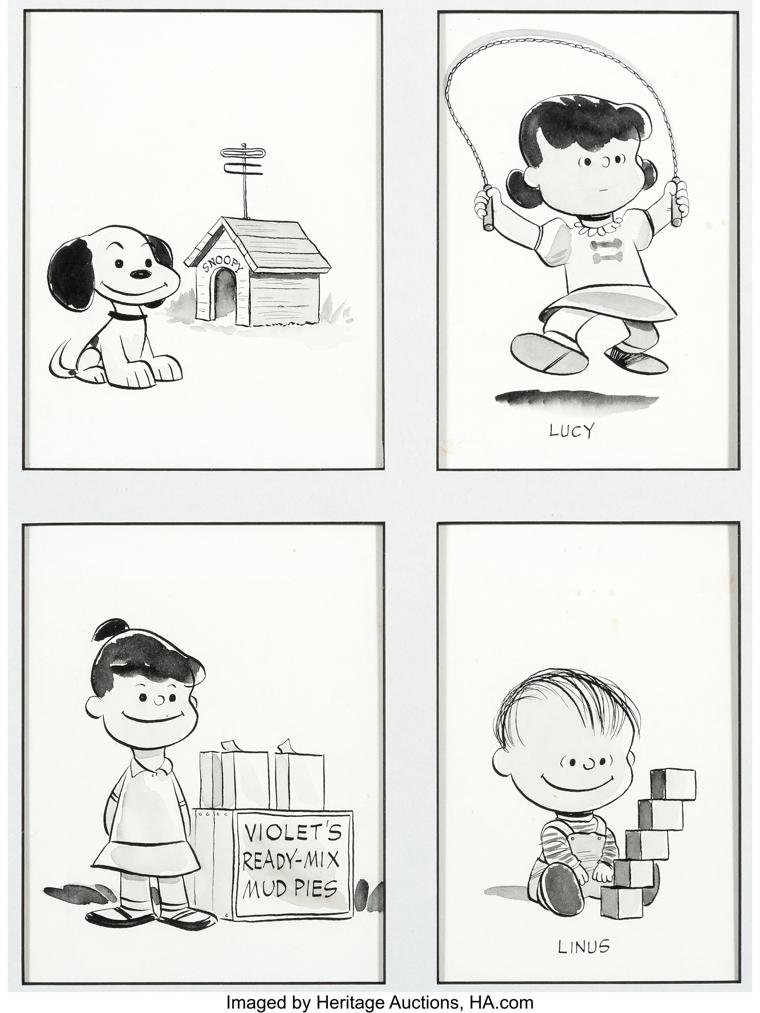 “The Peanuts Album” itself is remarkably scarce. For those wishing to lay eyes on a copy, it surfaces in the pages of Chip Kidd and Geoff Spear’s 2015 hardback collection Only What’s Necessary: Charles M. Schulz and The Art of Peanuts, which is full of rare illustrations from the Schulz Museum and Research Center in Santa Rosa, Calif.

Sandwiched between unpublished artwork and promotional pieces, “The Peanuts Album” receives a two-page spread in the book and a caption noting that “this promotional foldout booklet features early versions of the characters and a photo of Schulz and his family.” It says, too, that fans who wrote to United Feature Syndicate “would receive the two-sides mini-album, which was advertised in newspapers.”

The giveaway foldout contains more than just the eight drawings: There’s also a miniature biography of Schulz, detailing his hobbies (golf and bridge), his service in World War II (“as a machine gunner in Europe”) and his place of residence (Minneapolis, where “he gets to his studio at 6:30 A.M. to work on his daily strip and Sunday page”). There’s also a photo of Schulz and wife Jean and their three children Meredith, Craig and Charles Jr. At the time, the cartoonist was only 31 years old.

“When we found the giveaway album to go along with the artwork, it was a real eureka moment,” Lentz says. “There was no reason to believe this artwork existed. But here it is.”

And at just the right time!

On Nov. 20, during Heritage’s four-day Comics & Comic Art event, a Nov. 17, 1950, Peanuts daily strip sold for $192,000 – a new world record for Schulz original art. It was the earliest piece of his original art Heritage ever had the privilege of offering at auction.

The original artwork for “The Peanuts Album” is hardly the sole Charlie Brown piece in Heritage’s Dec. 11-13 Animation Art event. All told, there are more than 40 lots ranging from original animated drawings to cels to books signed by Schulz.

From the iconic A Charlie Brown Christmas, the most heartbreaking and heartwarming animation special ever created for prime-time TV, comes one remarkable original animation drawing. It features no less than Charlie Brown and his unloved tree perched upon Schroeder’s piano, adorned with the signature of the special’s director Bill Melendez.

From that same immortal Christmas special comes a remarkable two-fer: a Melendez-signed animation drawing and its accompanying color model cel in which Charlie Brown ill-advisedly seeks psychiatric help from Lucy at her booth. There, the doctor is “real in” at five cents a pop (psychiatry).

No less beloved is 1966’s It’s the Great Pumpkin, Charlie Brown, from which there is a rare production cel featuring Lucy as a witch (because “a person should always choose a costume which is in direct contrast to her own personality,” she would insist) and Pig-Pen as a ghost surrounded by his ubiquitous cloud of dust. Charlie Brown is also featured in a production cel from the 1985 CBS special You’re a Good Man Charlie Brown.

All that and much, much more joins the event’s centerpiece item: that original artwork for “The Peanuts Album,” which may never again come to market.

“I can’t stop looking at it,” Lentz says of the framed collection of portraits. “You can see the care he took in each portrait – the details, the shading, the sentiment. You can just see how much Schulz loved those characters. It’s just a magical piece.”