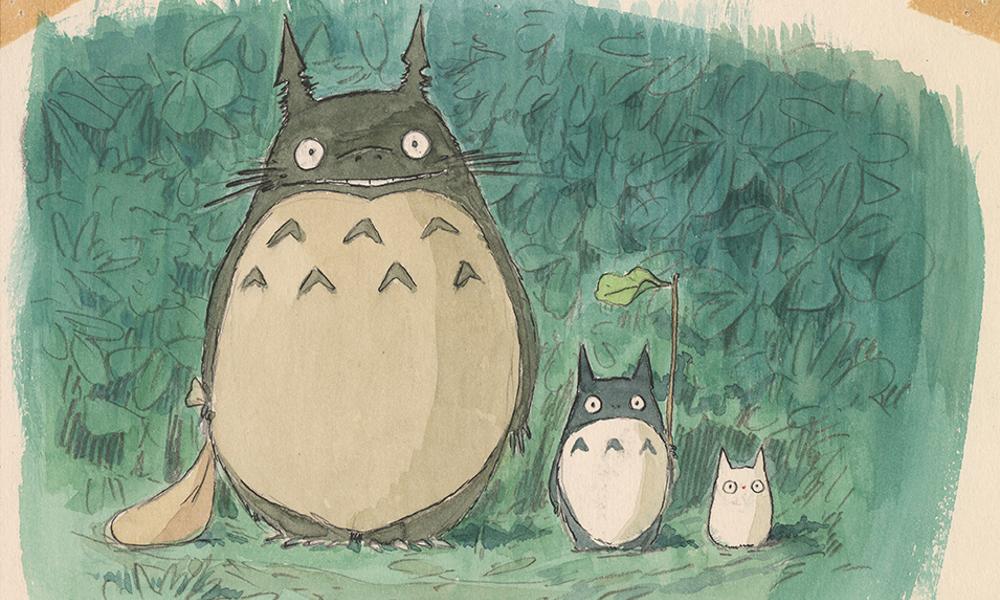 The Academy of Museum of Motion Pictures has revealed details of Hayao Miyazaki, its inaugural temporary exhibition celebrating the Oscar-winning Japanese animation master. The show is curated by Academy Museum Exhibitions Curator Jessica NIebel and Assistant Curator Raul Guzman, and organized in collaboration with Studio Ghibli, which Miyazaki co-founded in 1985. On view in the Marilyn and Jeffrey Katzenberg Gallery at the museum’s public opening on April 30, Hayao Miyazaki marks the first North American museum retrospective dedicated to the acclaimed artist and his work.

With more than 300 objects, the exhibition will explore each of Miyazaki’s animated feature films, including My Neighbor Totoro (1988) and the Academy Award-winning Spirited Away (2001). Visitors will travel through the filmmaker’s six-decade career through a dynamic presentation of original imageboards, character designs, storyboards, layouts, backgrounds, posters and cels, including pieces never before displayed to the public outside Japan, as well as large-scale projections of film clips and immersive environments. 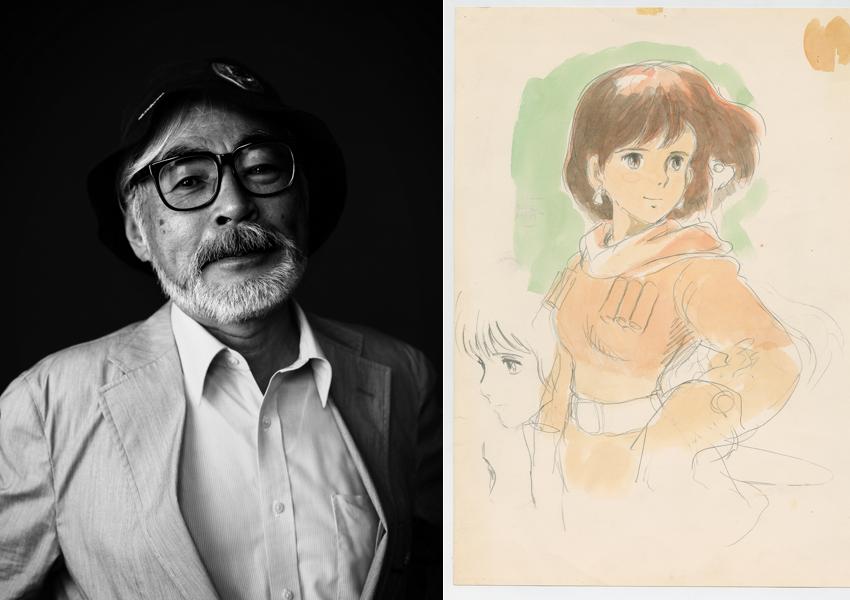 “It is an immense honor that Hayao Miyazaki is the inaugural temporary exhibition at the Academy Museum of Motion Pictures,” said producer & Studio Ghibli co-founder Toshio Suzuki. “Miyazaki’s genius is his power of remembering what he sees. He opens the drawers in his head to pull out these visual memories to create characters, landscapes and structures that are bursting with originality. It is our hope that visitors will be able to experience the entire scope of Hayao Miyazaki’s creative process through this exhibition. I am deeply grateful to all those who have been instrumental in presenting this exhibition.”

Academy Museum Director Bill Kramer commented, “We could not be more excited to launch our new institution with the most comprehensive presentation of Hayao Miyazaki’s work to date. Honoring the masterful career of this international artist is a fitting way to open our doors, signifying the global scope of the Academy Museum.”

“Hayao Miyazaki has a singular ability to capture how we perceive life, with all its ambiguities and complexities,” said curator Niebel. “It has been a privilege to collaborate with Studio Ghibli in creating an exhibition that will appeal to the most avid Miyazaki fans and those not yet familiar with his work.” 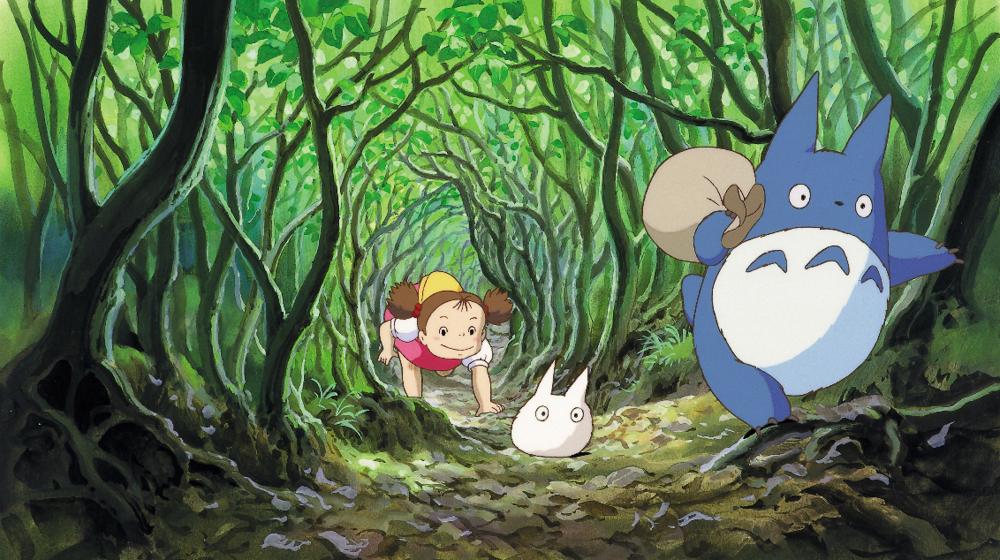 Thematically organized in seven sections, the exhibition is designed as a journey: To enter,visitors follow four-year-old Mei (My Neighbor Totoro) into the Tree Tunnel gallery; a transitional space that leads into Miyazaki’s enchanted worlds.

Emerging from the tunnel, visitors will find themselves in the Creating Characters gallery, which features a multi-screen installation of short clips of Miyazaki’s main protagonists. This section highlights how his characters are developed from concept to creation and features original character designs from Totoro, Kiki’s Delivery Service (1989) and Princess Mononoke (1997) — some of these artworks have never been seen outside Japan.

In the following Making Of gallery, visitors will learn about Miyazaki’s long-term collaboration with the late Studio Ghibli co-founder Isao Takahata and his early works as an animator, including groundbreaking TV series Heidi, Girl of the Alps and his first feature film Lupin the 3rd: The Castle of Cagliostro (1979). A special tribute to Nausicaä of the Valley of the Wind (1984) emphasizes its importance to Miyazaki’s career and the founding of Studio Ghibli. 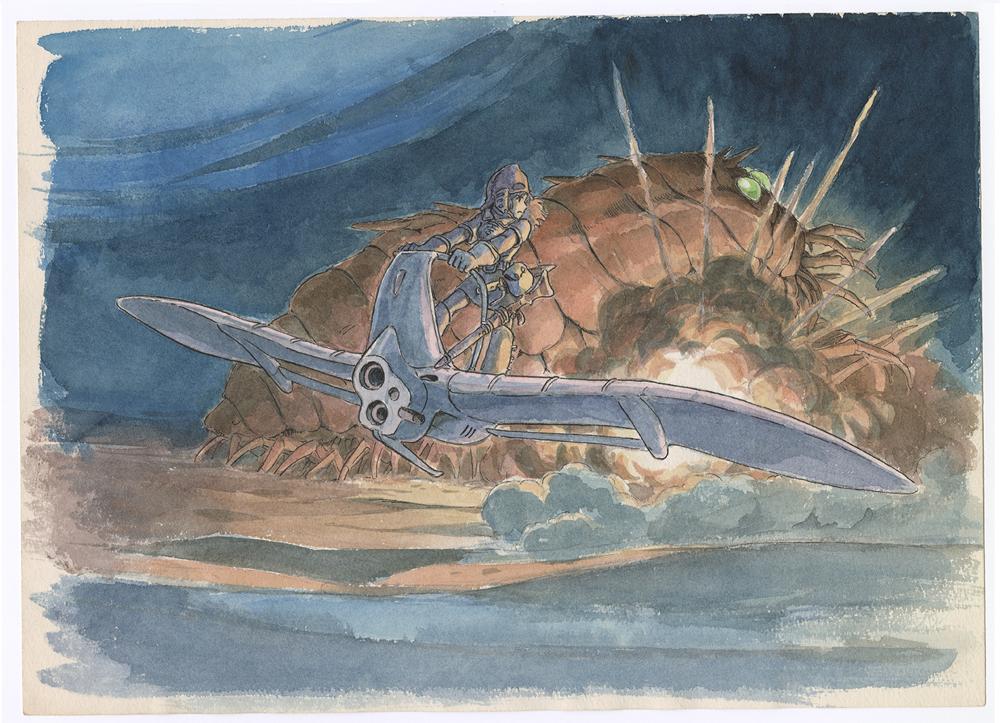 Nausicaä of the Valley of the Wind © 1984 Studio Ghibli

From there, visitors move into the Creating Worlds gallery, a space evoking Miyazaki’s fantastical worlds. The gallery will capture the contrast between beautiful, natural and peaceful environments and the industrial settings dominated by labor and technology that both often feature in Miyazaki’s movies. Visitors can view concept sketches and backgrounds that offer insight into Miyazaki’s imagination, including an original imageboard from his first Ghibli film, Castle in the Sky (1986) and artwork from subsequent movies. Other areas explore Miyazaki’s fascination with complex vertical structures, such as the famous bathhouse in Spirited Away and the underwater world of Ponyo (2008), as well as Miyazaki’s interest in flight as seen in Porco Rosso (1992) and The Wind Rises (2013). As a highlight of the exhibition, visitors can enjoy a moment of quiet contemplation in the Sky View installation, addressing another frequent Miyazaki motif: the desire to slow down, reflect and dream. 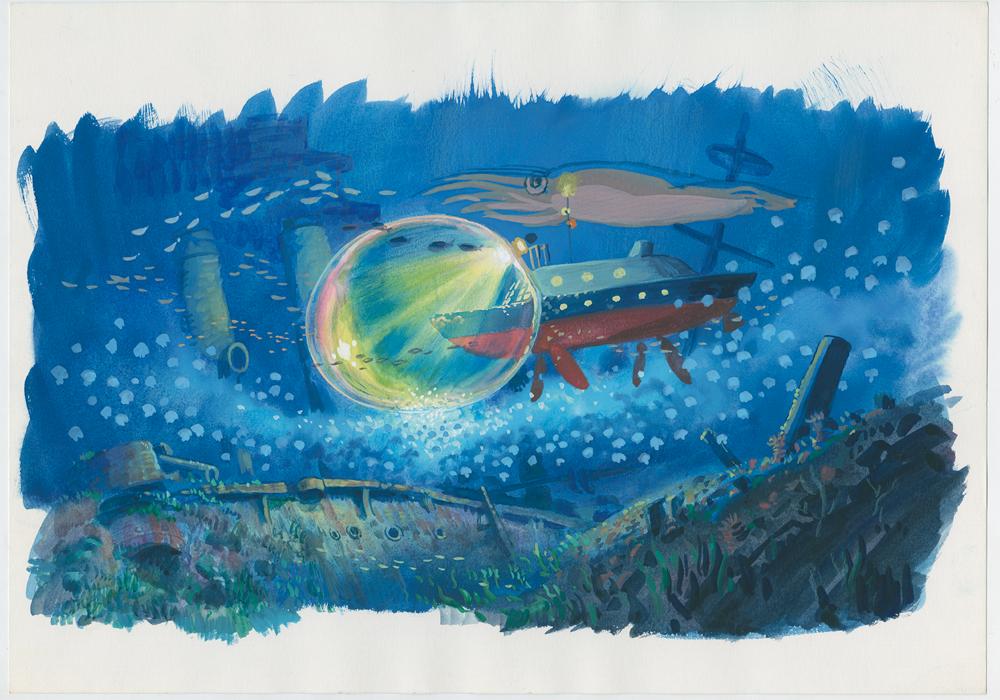 Next, the Transformations gallery affords visitors the opportunity to explore the astonishing metamorphoses often experienced by both characters and settings in Miyazaki’s films. In Howl’s Moving Castle (2004), for example, the protagonists go through physical transformations that reflect their emotional states, while in other films, such as Nausicaä, Miyazaki creates mysterious and imaginative ways to visual the changes that humans impose on the natural world.

Visitors then enter the exhibition’s final gallery, Magical Forest, through its Mother Tree installation. Standing at the threshold between dream and reality, colossal, mystical trees in many of Miyazaki’s films represent a connection or gateway to another world. After passing through the installation, visitors encounter the spirits of the forest — such as the playful Kodama from Princess Mononoke — through an array of storyboards and mixed media. Visitors exit through another transitional corridor, which guides them from the imaginative worlds of Miyazaki back into the museum. 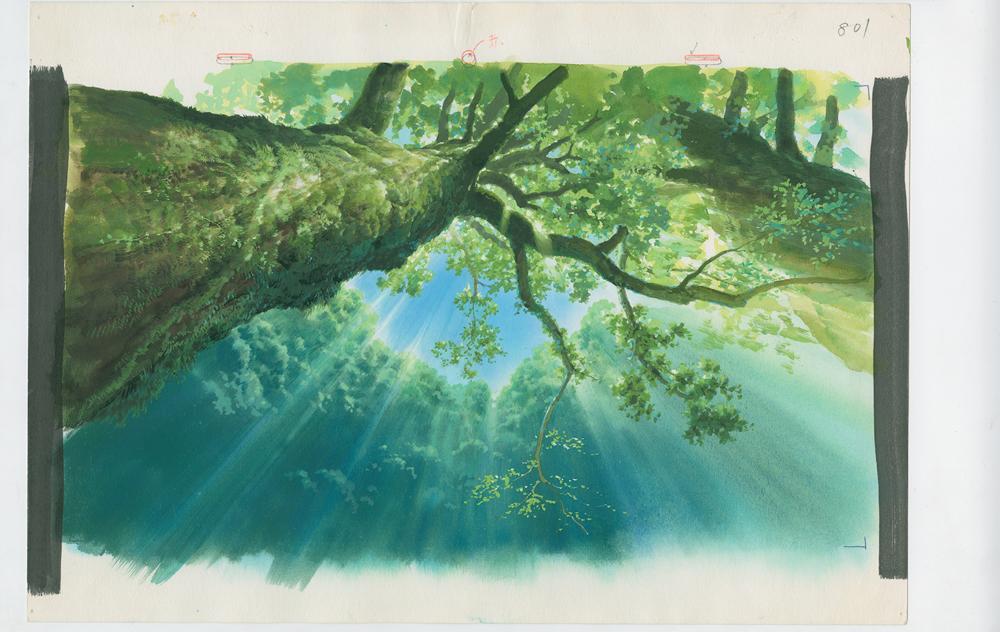 Hayao Miyazaki will be accompanied by a 256-page catalog that takes the reader on a richly illustrated journey through the filmmaker’s extraordinary cinematic worlds. Production materials from his early television work through all of his 11 feature films offer insight into Miyazaki’s creative process and masterful animation techniques. Published by the Academy Museum of Motion Pictures and DelMonico Books, the catalog includes a foreword by Toshio Suzuki, essays by Pete Docter, Daniel Kothenschulte and Jessica Niebel, and an illustrated filmography.

The exhibition will also be complemented with film screenings in both English and Japanese in the museum’s state-of-the-art theaters, public programs and unique merchandise created with Studio Ghibli available exclusively at the museum store. 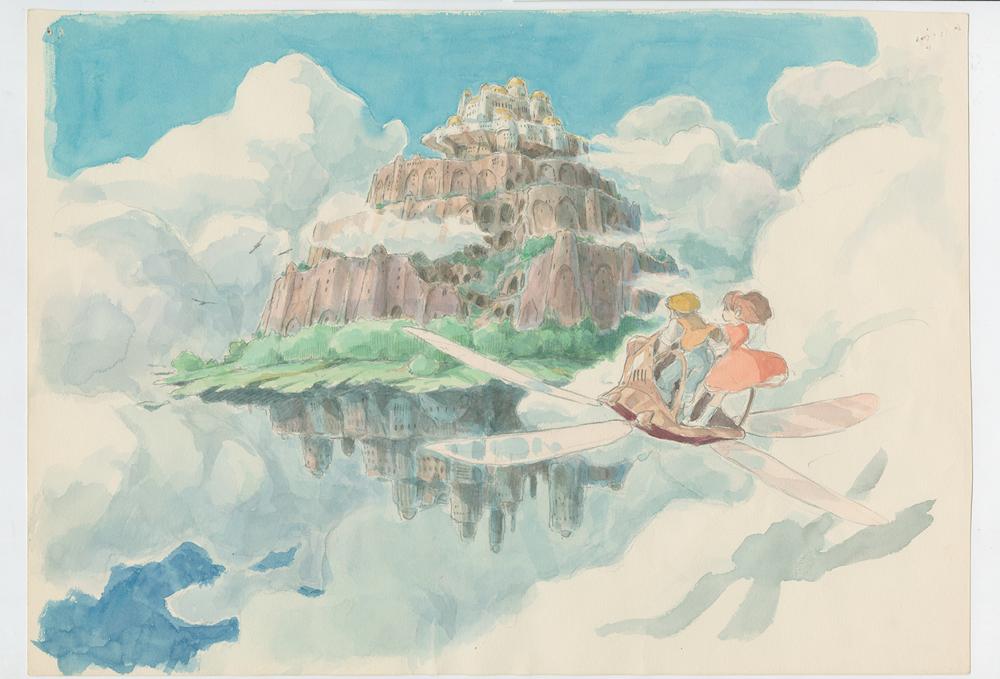