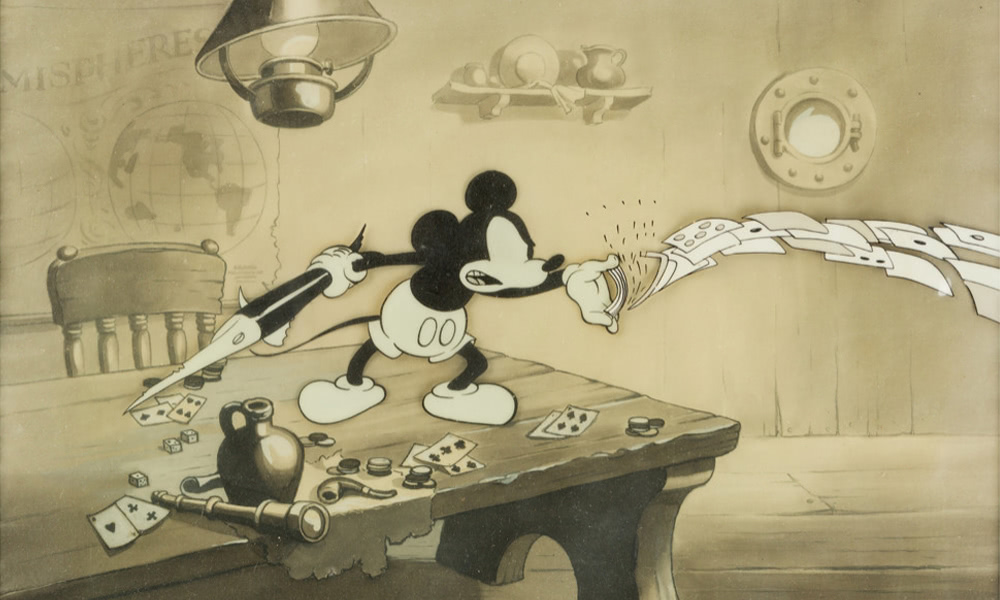 Now, Heritage Auctions is offering a chance to own an extraordinarily rare piece of Mickey’s early history by offering an extraordinarily rare black-and-white, hand-inked nitrate production cel setup from Shanghaied, featuring a swashbuckling Mickey Mouse on a hand-painted key master background. The piece is one of the many gems hitting the block in the February 4-7 Animation Art Signature Auction.

“This is an incredible piece that rarely becomes available to the public,” Heritage Auctions Vice President and Animation & Anime Art Director Jim Lentz said. “Mickey Mouse is the most iconic cartoon character of all time, and has been for years. Black-and-white Mickey Mouse production cels with their key master backgrounds rarely survive this long, and certainly not in this condition. This is an exceptional piece of animated film history from one of the greatest characters in animated films.”

The setup (estimate: $25,000+), which can be seen at the 3:16 mark of the seven-minute short, is believed to be one of fewer than 25 black-and-white Mickey Mouse key master setups remaining in private hands. During the film, a swordfish-wielding Mickey Mouse makes a raspberry noise with a deck of cards to antagonize the villainous pirate captain Peg-Leg Pete; it was the first theatrical short featuring Billy Bletcher as the voice of Pete.

It is notable that this black-and-white nitrate production cel includes its original hand-painted key master production background. This is a classic, incredibly rare piece of animation film history — this specific piece was in one of the early Animation Art Museum Shows for a company called Museum Graphics in California in the late 1970s.

Now the face of the Walt Disney Company, Mickey first appeared in 1928, six years before Disney produced Shanghaied, as a replacement for another character, Oswald the Lucky Rabbit. Key master setups featuring Mickey Mouse from black-and-white theatrical shorts are considered the rarest of all Disney animation setups.

Its rarity is hardly the cel’s only allure: The names “Fergy” and “Spencer” are hand-written at the bottom edge, likely a nod to two great animators: Norman Ferguson, best known for his contribution to the creation of Disney’s Pluto character, Peg-Leg Pete and the Big Bad Wolf, and Fred Spencer, long revered as an expert on Donald Duck. The background is rendered masterfully in black-and-white gouache and graphite, and the 12-field, two-peghole nitrate cels show astonishingly minor handling and edge wear compared to most nitrate cels of this era. Most impressively, the paint on the cels remains fully intact, making this one of the most well-preserved black-and-white Mickey Mouse setups Heritage Auctions experts have seen.

The lot includes a portfolio containing a rare set of six studio-printed publicity images for Shanghaied on 10-by-8-inch photographic paper.