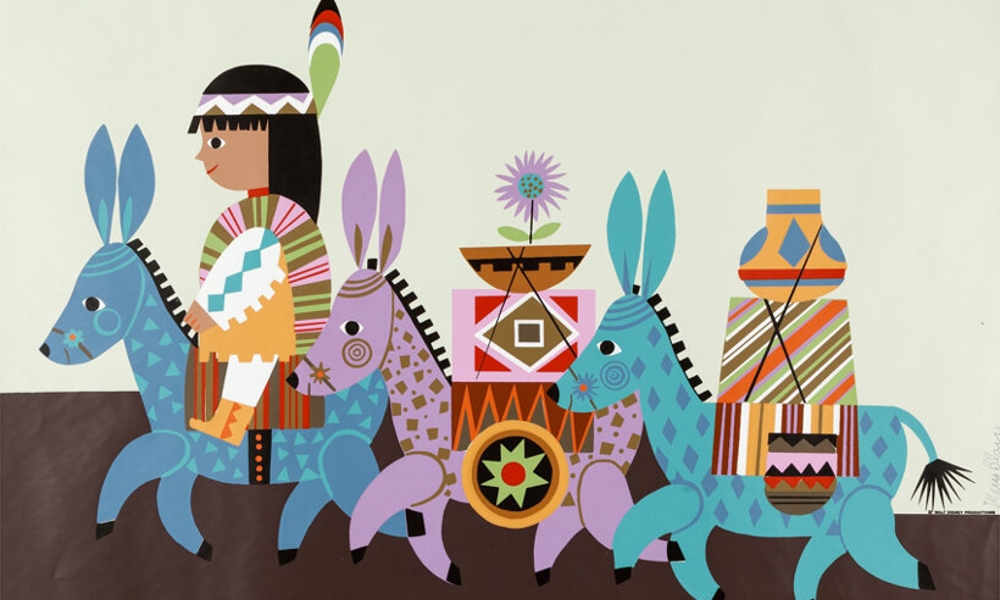 Dallas-based Heritage Auctions saw a world of interest in its first sale devoted solely to the wonderful world of Disney. The three-day auction, featuring The Art of the Disney Theme Park and the Disney Storybook Art Collection, realized nearly $1.8 million – almost twice the pre-sale estimate. It was also a complete sell-out, thanks to the more than 2,800 bidders around the globe who lined up for a thrill-ride auction that coincided with both the reopening of Disneyland and the 50th anniversary of Walt Disney World.

“This was Heritage’s first Disney-centric auction, but certainly not our last,” said Jim Lentz, Director of Animation Art. “Already consignors and clients are asking: ‘When is the next one?’ We have sold Disney storybook art before, but never with the singular focus of this event. And after Heritage’s success with our Knott’s Berry Farm event in 2017, and now the success of the Art of the Disney Theme Park auction, it’s clear there’s a great love and a significant demand for this segment of collecting.”

Cult favorite attraction the Haunted Mansion inspired the top lot of the event: an original painting from the stretching portrait gallery. The canvas features a portrait of three men in quicksand whose precarious position is revealed as the room and its portraits stretch, and brought $108,000 during Day Two of the auction. Created by celebrated Imagineer Marc Davis, this visual gag was painted by well-known Disney scenic artist Clem Hall – renowned for his work on The Wizard of Oz, Rosemary’s Baby and Singin’ in the Rain – and was sold in a remarkable state of preservation.

A hand-pulled silkscreen Haunted Mansion poster likewise realized a fantastic sum: $19,200. It was one of numerous attraction posters available in the auction, and among myriad to sell for five figures, befitting their condition, rarity and beauty. 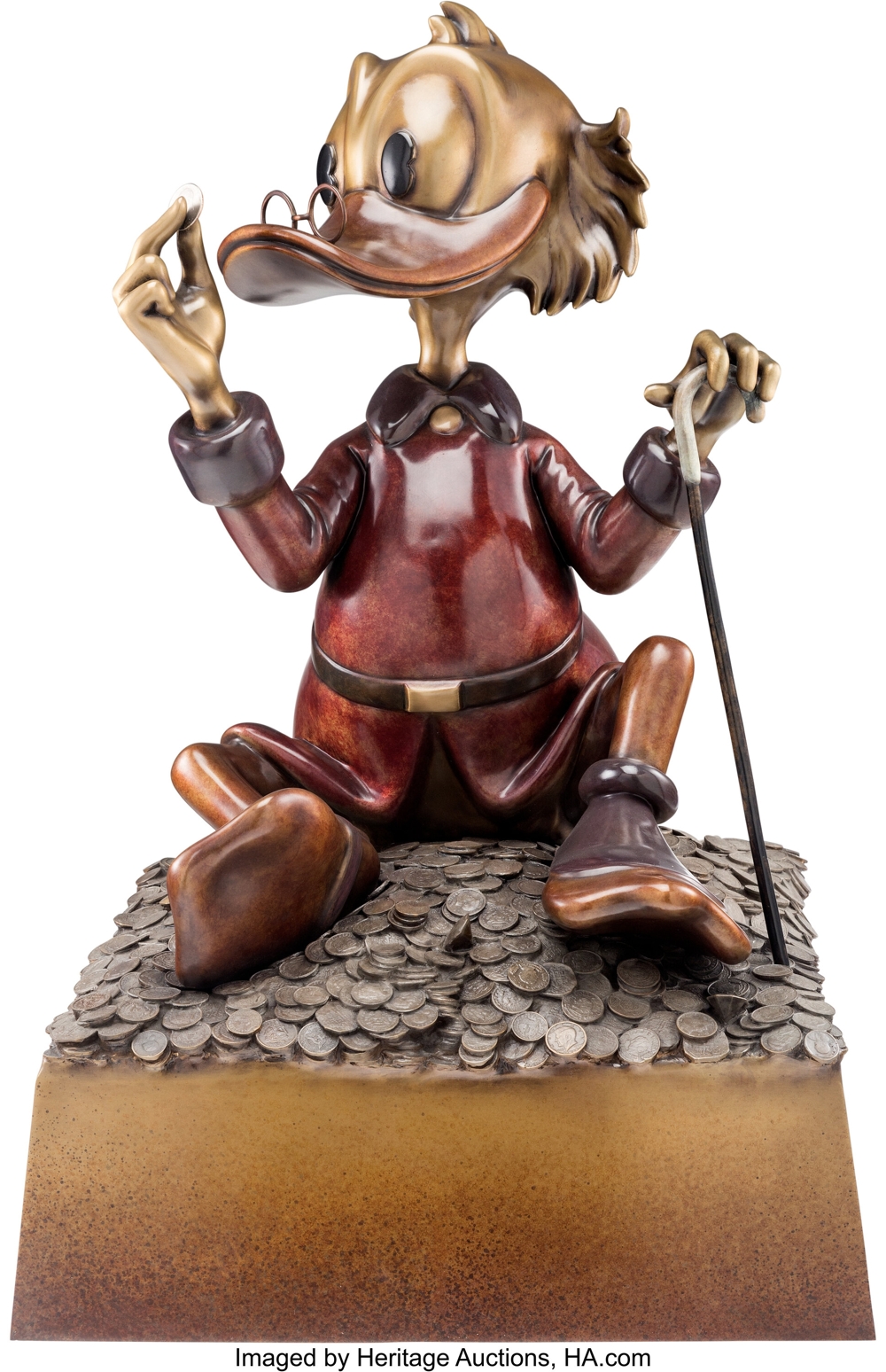 This Dollar Saved My Life at Whitehorse’ bronze sculpture of Scrooge McDuck.

Two Scrooge McDuck sculptures also realized high prices in the auction, appropriately! The extraordinarily rare and exceptionally large hand-painted “Trail of the Unicorn” limousine sculpture, featuring Carl Barks’ creation, brought $81,000. Not far behind was “This Dollar Saved My Life at Whitehorse” bronze statue featuring, what else, but Scrooge McDuck atop a pile of coins and gems. Last seen and sold in the official 1994 Disneyana Convention Auction held in Disneyland, the statute sold for $60,000, three times its estimate.

It comes as no surprise that another of the top lots comes from the hand of Mary Blair, said to be Disney’s favorite artist. And her personally owned serigraph proof copy of the 90-foot mural at the Contemporary Resort Hotel at Walt Disney World is exceptional on countless fronts, among them: This is a rare piece of Blair hand-pulled serigraph artwork inspired from this mural, which was her final work for Disney. It sold for $25,200, more than 10 times its pre-auction estimate

One of the most historic lots in the auction was also one of its biggest hits: the complete archive of plans and blueprints for Walt Disney’s Carolwood Pacific Railroad, built in his backyard well before Disneyland was a glint in Mickey Mouse’s eye. The sprawling collection of documents, some bearing Disney’s signatures and sign-offs and all having never before been available to the public, realized $43,200.

Another big hit in the auction was this childhood memory: Mel Crawford’s original artwork featured on the cover of 1955’s storybook Davy Crockett: King of the Wild Frontier. This museum-worthy painting of Fess Parker as the folk hero, frontiersman and Texas revolutionary was a Golden Book keepsake that realized a platinum price of $19,200.

Original storybook illustration for Snow White and the Seven Dwarfs, by Campbell Grant.

The artwork was uniformly exceptional, according to the Heritage experts, which is why every single piece was snapped up by collectors – from Campbell Grant’s original Snow White and the Seven Dwarfs storybook illustrations, which realized $10,200, to a Disneyland Magazine wraparound cover illustration for Jungle Book that sold for $8,400.

“This collection of the best of the best of Disney storybook art from the hands of some of the greatest artists to ever work at Walt Disney Studios surpassed our wildest dreams,” said Lentz. “And more important, it showcases this art form as one to be reckoned with.”

Most of the lots offered in the auction sold for well above estimate, and not merely the larger or more iconic lots. That includes a Disneyland Star Tours attraction entrance sign, which sold for $12,000; and a Walt Disney World Contemporary Resort room display map that realized $10,200.

“In short, everyone was a winner,” Lentz added, “from the consignors who brought these materials to market for the first time to the collectors who seized this rare opportunity to snap up so many historic items from the Magic Kingdom. We can’t wait to do this again.”