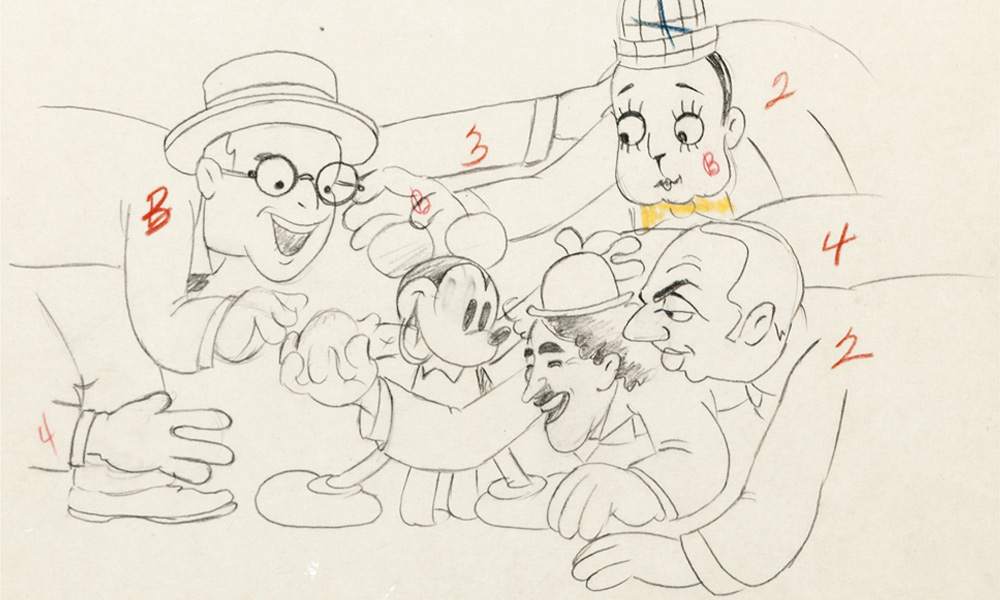 The largest collection of original, hand-drawn, vintage Disney animation art ever offered in a single auction will cross the block November 27 in Heritage Auctions’ Mickey Mouse and Friends Animation Art Internet Auction on HA.com. The sale will feature animation drawings, as well as original concept, layout and storyboard drawings featuring characters beloved by generations of fans. All 289 lots in the sale are offered without estimates, with bidding beginning at $1.

“No company has created more pop culture icons on a global scale than Disney, with characters like Mickey Mouse, Minnie Mouse, Donald Duck, Goofy and Pluto,” commented Jim Lentz, Heritage Auctions Animation Art Director. “The drawings that were used to create the color images photographed one frame at a time, and then played at 24 per second, are the heartbeat of a cartoon and are what has been called ‘the illusion of life.’”

Few cartoons can claim to match the historical relevance of Steamboat Willie, the success of which helped to establish Disney as the world’s preeminent animation studio. On offer is a Steamboat Willie Mickey Mouse Animation Drawing with Walt Disney Signature (1928), an original Ub Iwerks animation drawing of Mickey Mouse in his debut theatrical performance. Directed by Walt Disney himself, the short was the first Disney cartoon to feature “synchronized sound;” is is ranked No. 13 in Jerry Beck’s 50 Greatest Cartoons, and was selected in 1988 for preservation by the U.S. National Film Registry. The graphite image, on 12 field 2-peghole paper, is framed alongside a Walt Disney signature on rare personal stationary. The art and signature share a common frame under glass that measures 21 by 16-1/2 inches.

Dognappers Mickey Mouse and Donald Duck Animation Drawings Sequence of 4 (1934) is a sequence of four original animation drawings of Mickey Mouse and the early, long-billed version of Donald Duck from the very first time the two characters paired up. The lot is one of several in the sale offering multiple images that were used in sequence in the process of bringing still images to life; in this case, the images come from just the third theatrical appearance by Donald Duck. In this short, Donald and Mickey are motorcycle police officers bent on napping a dognapper named “Peg Leg Pete.” Each drawing is in graphite on 12 field 2-peghole paper, and the pages are numbered 135, 168, 218 and 245 in the lower right corner.

Other animation sequences offered in single lots include, but are not limited to:

In a Bambi Animation Drawing (1942) being auctioned, the title character receives encouragement from his new forest friends in this scene from Disney’s fifth animated feature film, which was voted No. 3 in the top 10 animated films by the American Film Institute. This image comes from the scene in which Bambi is taught to speak by his friend, Thumper. This original animation drawing measures approximately 5 by 6 inches and is done in graphite and red pencil on 12 field 5-peghole animation paper.

The youngest member of the Disney Princess lineup is brought to life in Snow White and the Seven Dwarfs Snow White Production Drawing (1937). Her character provided the foundation for later Disney heroines like Cinderella and Aurora from Sleeping Beauty, and many of Snow White’s characteristics — including her royal lineage, special relationship with animals and fondness for singing — still inspire modern Disney characters.

From Disney’s 14th animated film comes a Peter Pan Marc Davis Tinker Bell Production Drawing (1953). Released Feb. 5, 1953 to praise from the New York Times for its animation, the film tells the story of the boy who wouldn’t grow up. This production drawing of Peter Pan’s sidekick, Tinker Bell, was created by Disney Legend and one of “Walt’s Nine Old Men,” Marc Davis, who created and supervised the animation of Tinker Bell.

A Lady and the Tramp Lady Production Drawing (1955) comes from the first animated feature filmed in the CinemaScope Widescreen film process, a classic that was ranked No. 95 on the American Film Institute’s list of the “100 Greatest Love Stories of All Time.”

Other top lots include, but are not limited to: 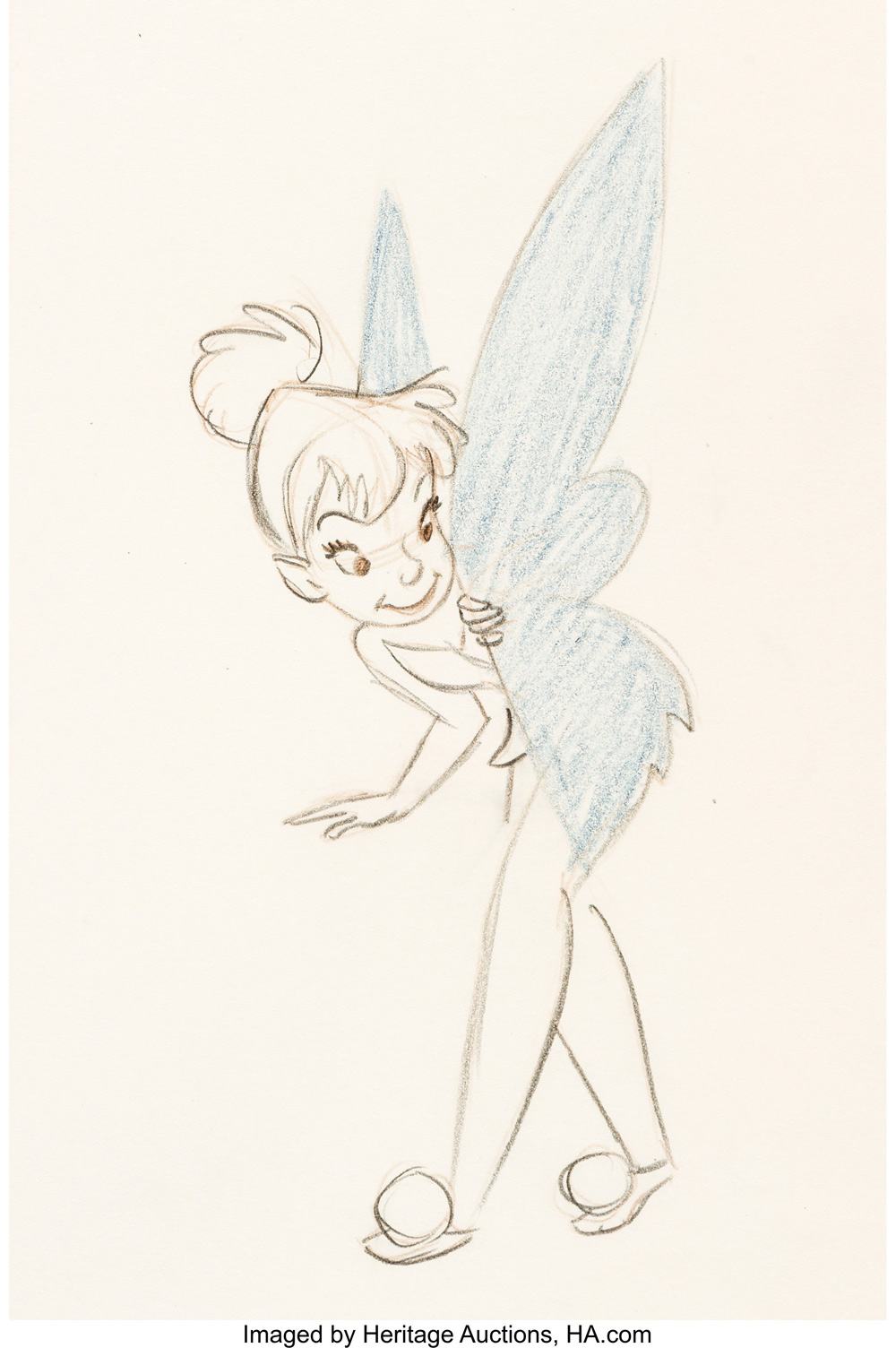 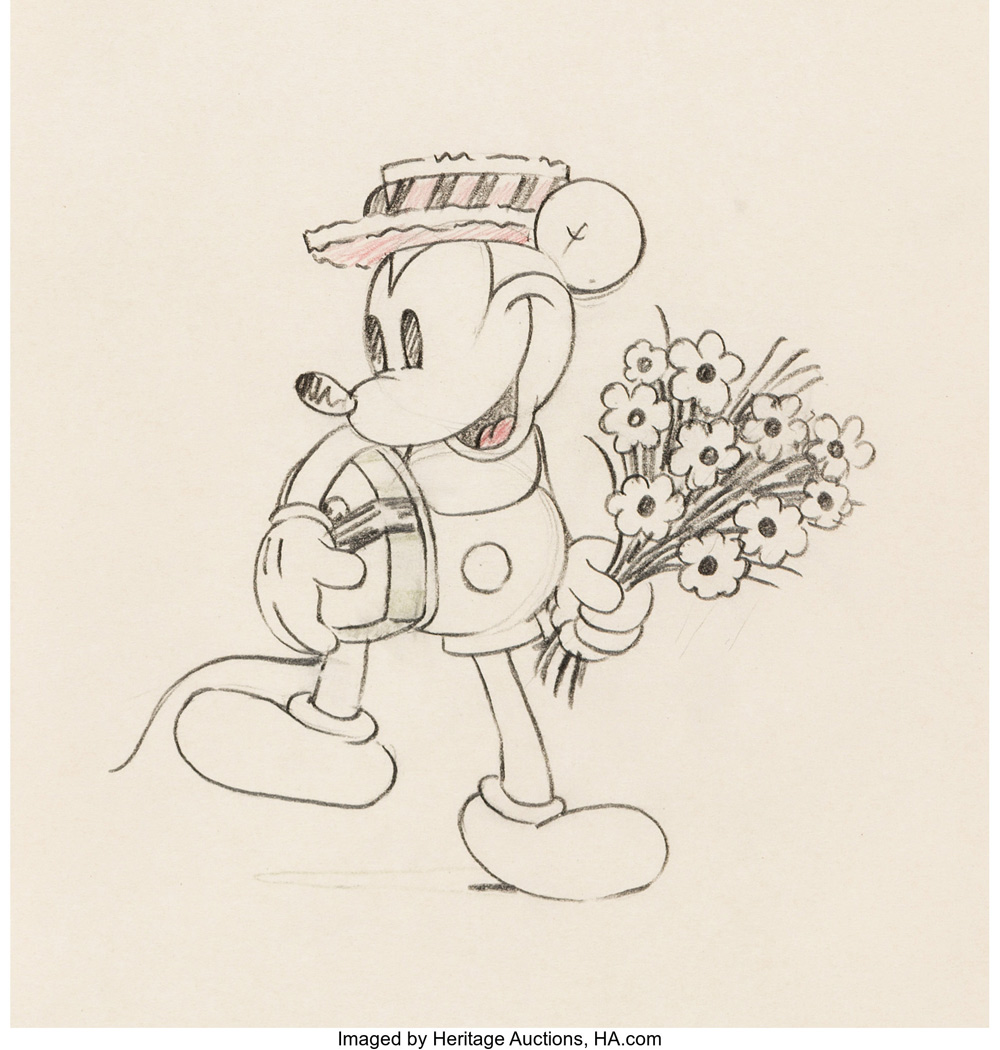 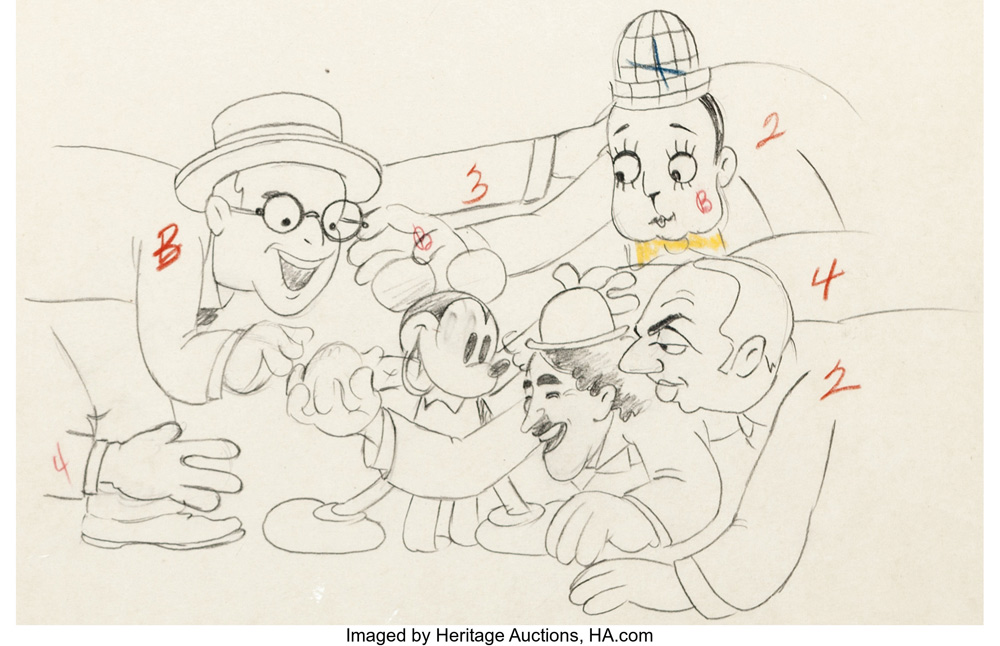 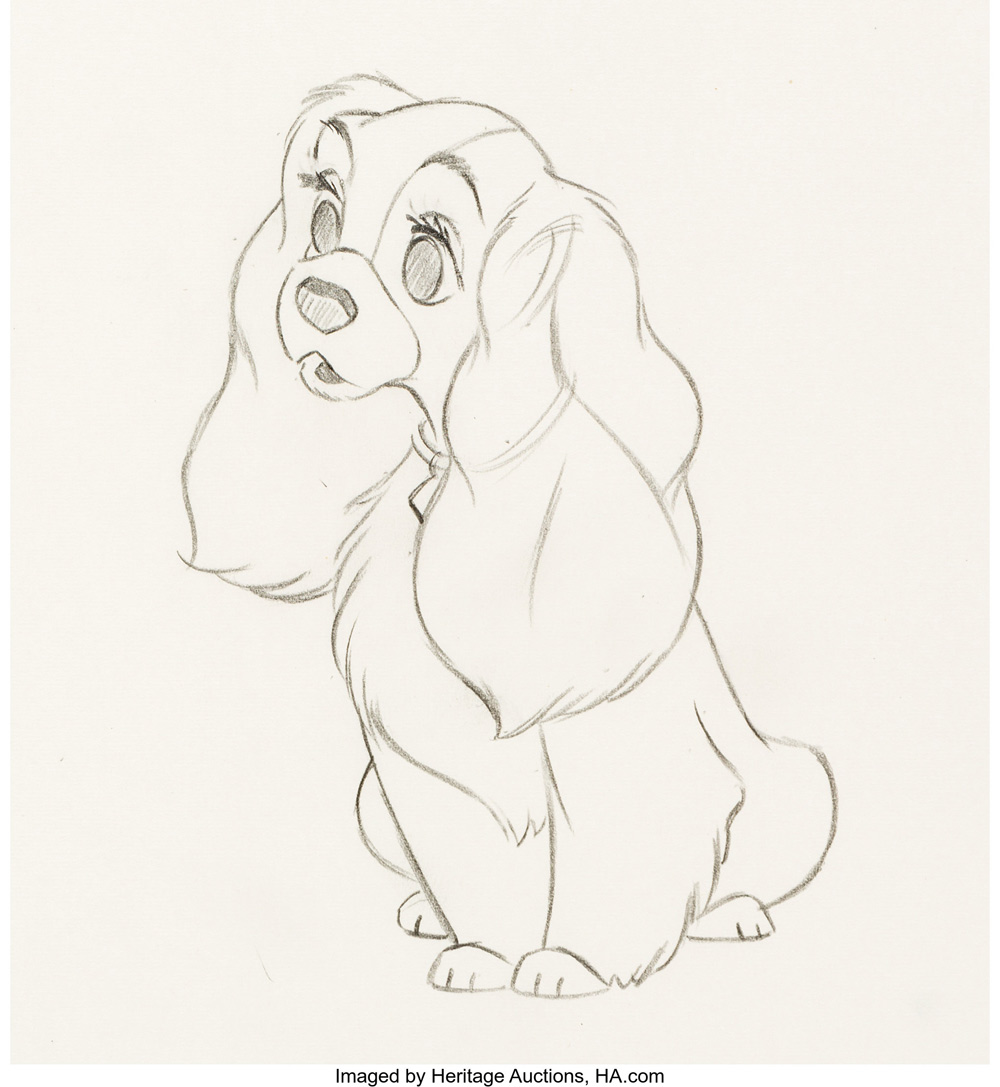 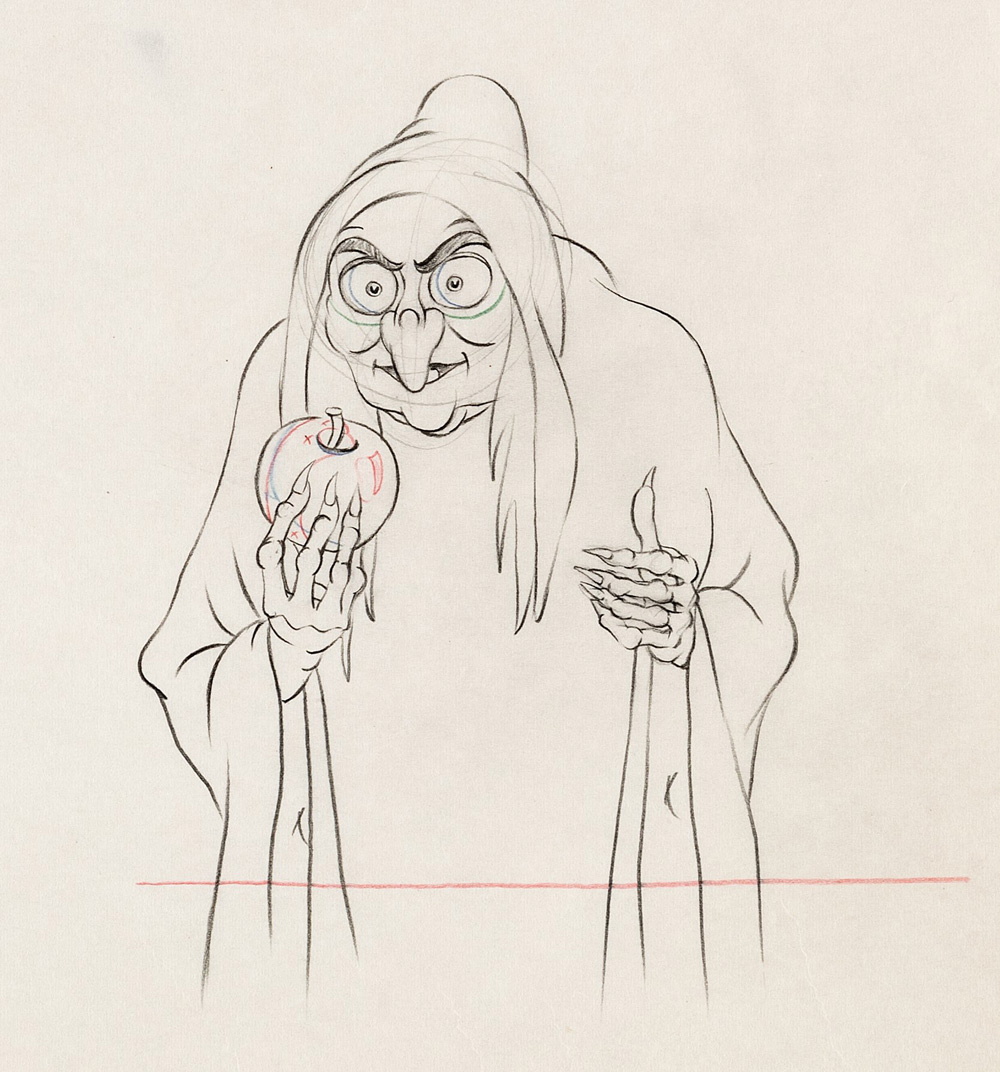