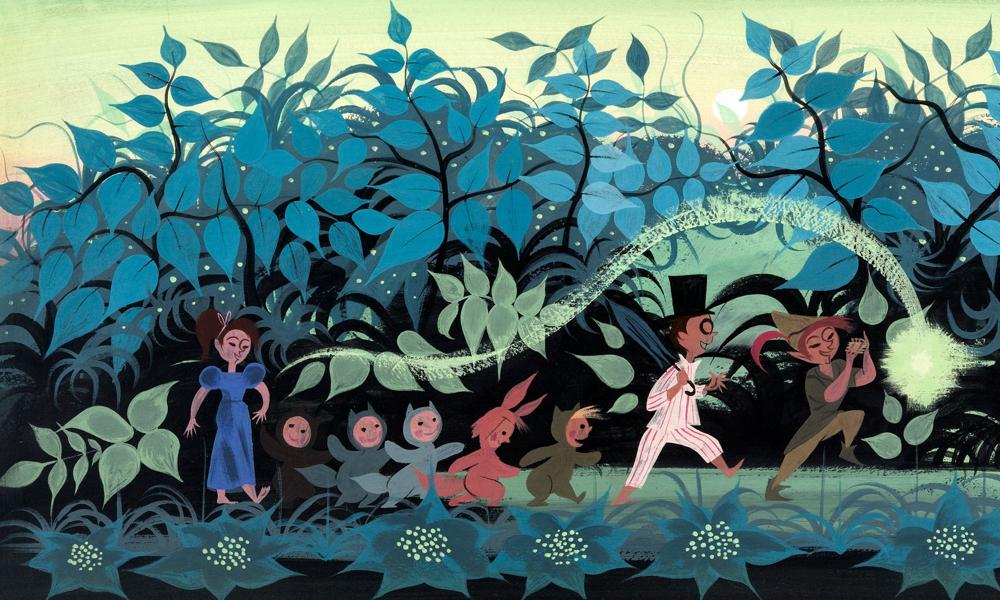 By all accounts, Mary Blair was Walt Disney’s favorite artist. She was a definite favorite, too, of the more than 4,100 worldwide bidders who pushed Heritage Auctions’ June 19-21 Animation Art event past the $3.7 million mark, making it what’s believed to be the single largest Animation Art sale ever.

Fourteen of the sale’s top 20 lots were painted by the expressionistic Blair, whose works have filled books and traveled in Disney-compiled exhibitions. From 1943 to 1953, she worked for Disney and defined some of the studio’s finest works; she gave them their style, breathed into them their life. Blair “saw the world in a fresh, new way,” wrote her biographer John Canemaker, “and brought a special childlike beauty and gaiety to the works of print, theme parks and movies.”

That includes her conceptual painting for 1953’s Peter Pan in which Peter and Tinker Bell lead Wendy, John and the Lost Boys through the jungles of neverland. That piece – as fine as any art hanging in any museum, an epic narrative told in a single gouache the color of a verdant forest at shimmering sunset – sold for $63,000.

Blair’s mischievous conceptual painting of Alice and the Cheshire Cat, done for the 1951 film Alice in Wonderland, sold for only slightly less: $60,000.

But not all of Blair’s offerings in the weekend event were cinematic: Her concept painting for the “It’s a Small World!” exhibit at the 1964’s World’s Fair in New York City, in the UNICEF Pavilion, was another of the sale’s decided highlights. Its renown – reproductions of this kaleidoscope of gold, green and purple decorate the lobby of the Disneyland resort in Anaheim – helped elevate the work’s sale price to $45,600.

Another centerpiece of the sale was David Hall’s painting of Peter, Wendy, Nana and Michael aboard Captain Hook’s Jolly Roger, a conceptual rendering done for Peter Pan way back in 1940. Only four years ago, Disney scholar Didier Ghez wrote in his book They Drew as They Pleased: The Hidden Art of Disney’s Musical Years (The 1940s – Part One) that this freshly uncovered piece is “without a doubt one of David Hall’s masterpieces.” Its price tag only underscores its artistic and historic value: $36,000.

“I believe Heritage Auctions has brought front and center Animation Art as a true American art form in its own right. It mixes pop culture with some of the greatest artists and visionaries this country has ever produced – Disney and Blair, yes, but also Eyvind Earle, Charles Schulz, Matt Groening and so many more included in this auction,” said Jim Lentz, Heritage Auctions’ Director of Animation Art. “Disney led the way in this sale, but impressive results were seen from all studios with magnificent results from such iconic shows as A Charlie Brown Christmas, [How the Grinch Stole Christmas] and The Simpsons – not to mention the opening animation sequences from Bewitched and I Dream of Jeannie.”

In fact, one of the event’s most impressive offerings came from a videogame: Dragon’s Lair, the 1983 game created by pioneering animator Don Bluth. A pop-culture icon of sorts, Dragon’s Lair has lived more than a few lives, including, most recently, as a character of sorts on Netflix’s Stranger Things. Perhaps this explains why the original artwork for a Dragon’s Lair promotional poster, originally estimated to sell for around $2,500, sold for $54,000. 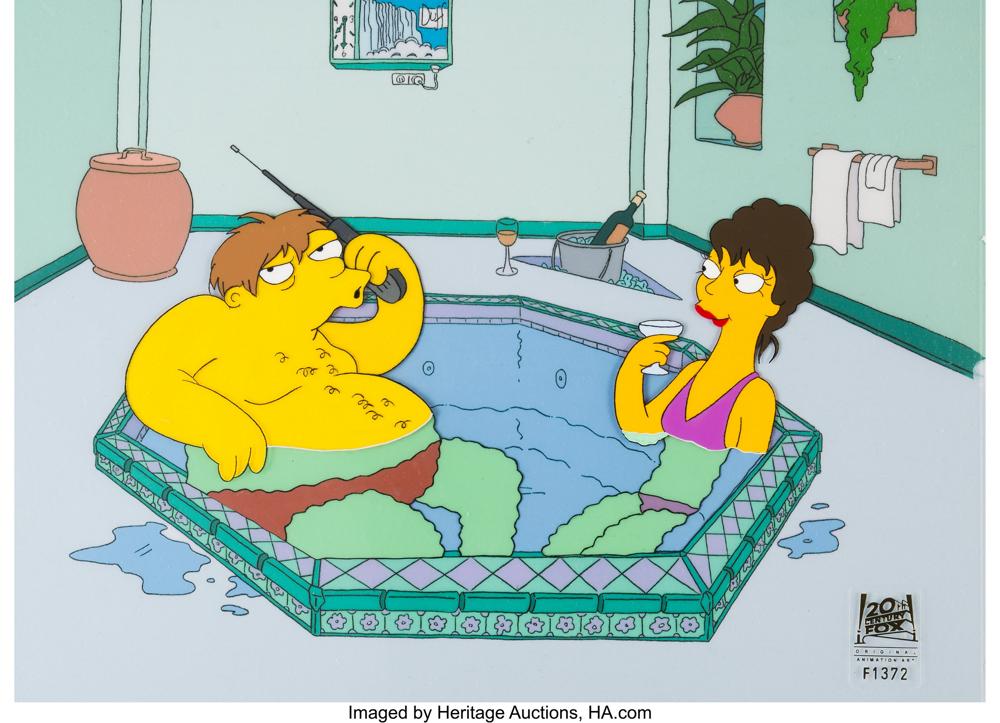 The Simpsons actually set what appears to be a world record for a production cel from that long-running series – certainly, for one featuring Barney and Linda Ronstadt. That’s right: A cel featuring the wildly unlikely twosome, from the classic fourth-season episode “Mr. Plow,” realized $24,000, which was a mere 32 times its pre-auction estimate.

And a production cel from the immortal A Charlie Brown Christmas sold for $38,400 after a round of spirited bidding. What’s notable about this result is that this work, like the cel from The Simpsons, doesn’t feature the title character. It was taken from the special’s opening sequence during which an ice-skating Snoopy leads the kids across a frozen pond.

Bidders’ hearts grew a few sizes when a production cel from Dr. Seuss’ How the Grinch Stole Christmas made an appearance – this one, especially, featuring the blue-eyed green meanie from Mount Crumpit learning the true meaning of Christmas. A relative bargain at $11,400, as Christmas doesn’t come from a store. 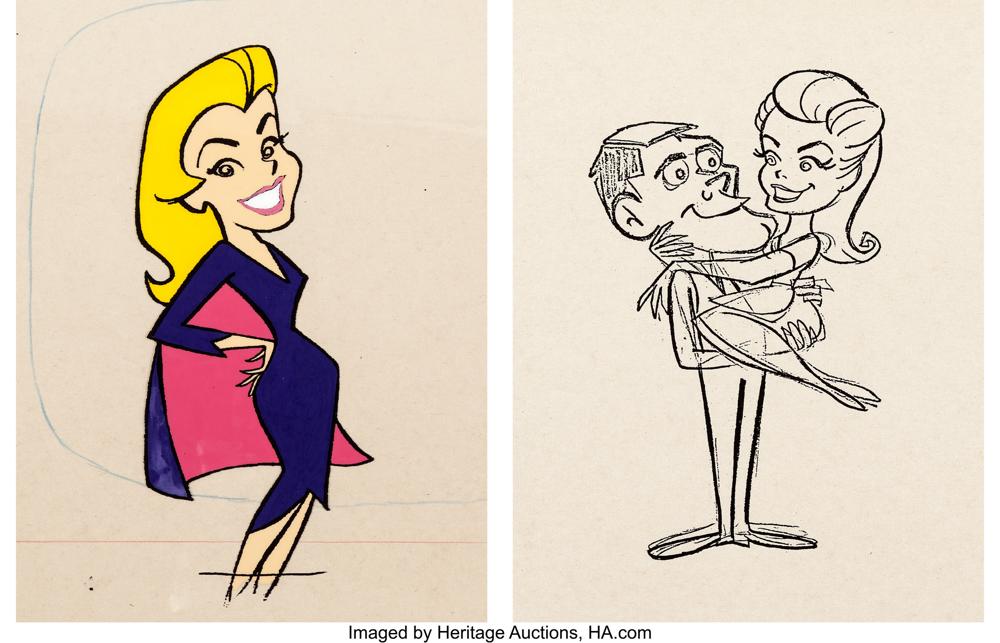 Two of TV’s most magical creations also pulled some big numbers from thin air. A group of two cels from the animated introduction to 1964’s Bewitched, featuring Elizabeth Montgomery as Samantha Stephens and Dick York as the First Darrin, sold for $13,200. And a hand-painted, hand-inked cel from the opening of 1965’s I Dream of Jeannie blinked into existence $12,600.

There were more than 1,600 pieces in this Animation Art auction – and in the end, every single piece but one sold during the auction. Lentz offers a good reason why:

“I believe this auction was an auction of smiles,” said Heritage’ Director of Animation Art. “And we need to smile today more than ever.”

Don’t miss the next Heritage Auctions animation event! Register for free at www.HA.com.