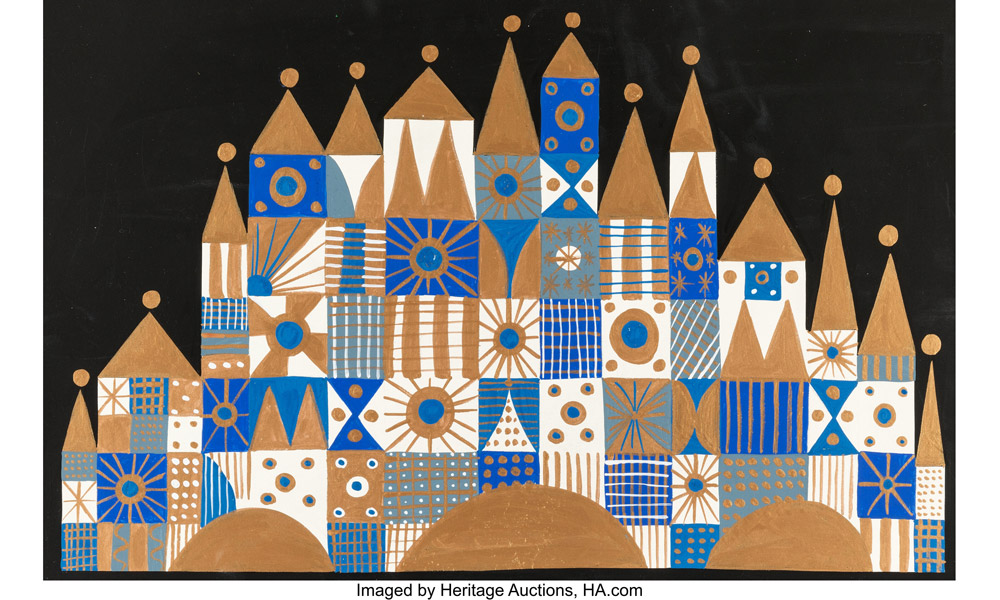 Biographer John Canemaker once wrote that Mary Blair‘s conceptual paintings for such films as Alice in Wonderland, Peter Pan and Cinderella were “as delicious as feasting on rainbows.” Blair was Walt Disney’s favorite artist, and this weekend, she was the favorite, too, of the more than 4,400 bidders who participated in Heritage Auctions’ record-setting $4.5-million three-day Animation Art Signature Auction.

Over three days, hundreds of works throughout the century-spanning event shattered their sales estimates, with record prices realized from every single major animation studio: Disney, Warner Bros., Hanna-Barbera, Fleischer Studios, MGM and Melendez Films. The auction had a record turnout and was a near sell-out, with more than 1,700 production cels, conceptual paintings, drawings, sketches and even statues finding new homes, where they will dazzle future generations as they delighted previous ones.

A bulk of works featured in this auction was consigned by a who’s-who of animation greats, as well as their estates and archives. Among the estimable lot contributing to this landmark sale: Chuck Jones, Ham Luske, Peter and Harrison Ellenshaw, Don Duckwall, David Hand, Ted Berman, Joe Hale, Jeff Carlson, Paul Terry and Del Connell, to name a few.

“It is so satisfying to see this great art form reach new, historic levels of interest,” says Jim Lentz, Heritage Auctions’ Vice President and Director of Animation & Anime Art. “This year has already seen record prices for this department in The Art of the Disney Theme Park and the Disney Storybook Art Collection and Anime Animation Art, and now comes this all-time record for vintage animation art. The artwork that brings a lifetime of smiles has hit a new benchmark.”

Blair’s name appears over and over at the top of the list of prices realized during the August 6-8 event, which realized a total of $4,547,071. Eight of the top 10 pieces sold last weekend were Blair’s. It was a staggering, record-setting run, one that was interrupted only by two Warner Bros. rarities featuring Bugs Bunny and Marvin the Martian, which likewise hit highwater marks at auction. 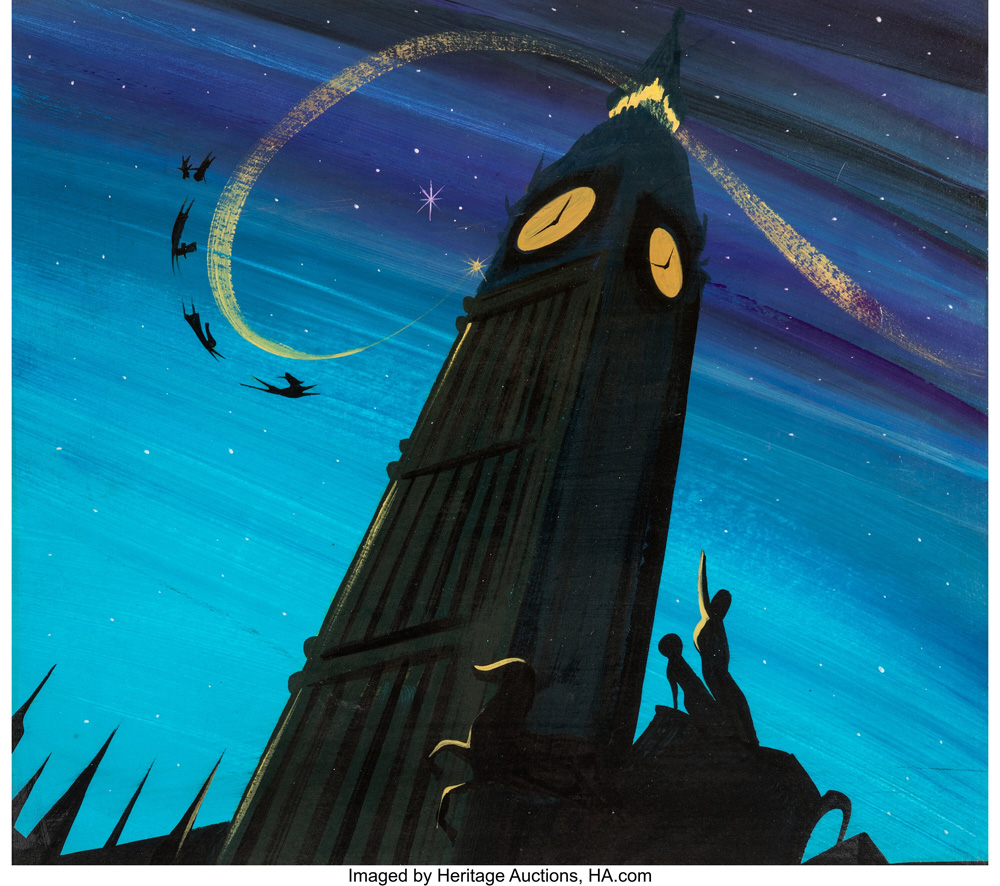 At the top of the weekend’s list was one of Blair’s conceptual paintings for Peter Pan made in 1953, in which Tinker Bell and Peter Pan lead Wendy, John and Michael past Big Ben on their way to Never Land. It was joined atop that list by a work painted a decade later, when Disney summoned Blair to help create a “boat ride celebrating the children of the world” for the 1964’s World Fair in New York City, which became It’s a Small World.

Each painting sold for $72,000, setting new world records for Blair’s works sold at auction. The previous record was the $66,000 realized in 2019 for a castle façade concept painting made for It’s a Small World. On Saturday another of Blair’s concept paintings made for the attraction likewise sold for $66,000.

The “queen of animation’s” unprecedented auction run was interrupted only by a certain wascally wabbit and a pesky alien in high-top sneakers: One of the rarest vintage Warner Bros. cels ever to flicker at Heritage Auctions, a moment from 1946’s Hair-Raising Hare featuring Bugs Bunny and the hirsute Gossamer, cracked the top 10 when it sold Friday for $52,800. Not far behind was a work so extraordinary and iconic that 25 years ago it was displayed at the Warner Bros. Animation Art Exhibit at Youngstown State University: the ray gun-pointing Marvin the Martian as seen in 1952’s Hasty Hare, directed by Chuck Jones. The work sold in this auction for $48,000. 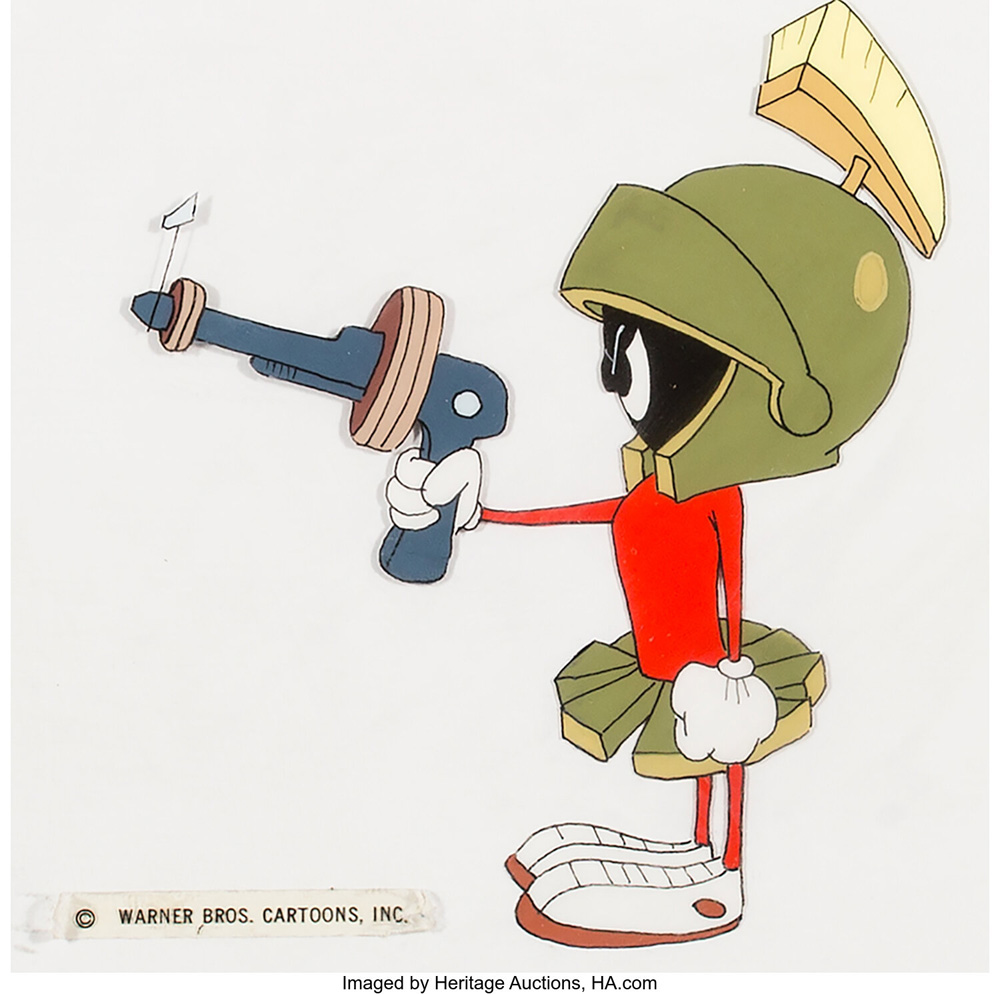 Marvin the Martian in Hasty Hare

Another Jones-directed classic, Dr. Seuss’ How the Grinch Stole Christmas, also stole the hearts of bidders during this sale. Two production cels from one heartwarming scene, during which the reformed, blue-eyed Grinch shares dinner with Cindy-Lou Who and his dog Max, sold for $15,600.

From Disneyland itself came Disney animation great Eyvind Earle‘s signed painting of Sleeping Beauty‘s Castle featuring Aurora’s cradle being visited by the three good fairies Flora, Fauna and Merryweather. This stunning, massive work, created in 1956 for the Sleeping Beauty Castle in Disneyland and originally sold at the theme park, realized $36,000.

Dozens of pieces throughout the event sold for five figures, ranging from the unmade (concept art from Roger Rabbit II: The Toon Platoon, which sold for $18,000) to the previously unsold (Jasmine and Aladdin maquettes from the collection of a Disney artist, which realized $13,200) to the simply unbelievable (an animation drawing from 1928’s landmark Steamboat Willie featuring Minnie Mouse, which sold for $16,800).