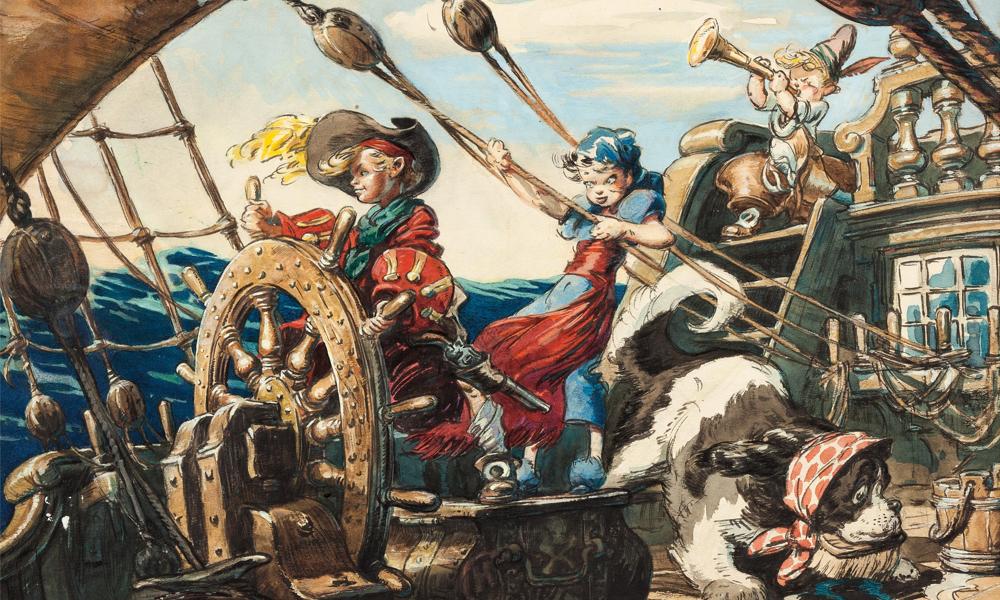 One of the largest collections of artwork from Walt Disney’s Peter Pan ever brought to market, including masterpieces by David Hall and Mary Blair and the largest offering of art, photos, books, ephemera, checks, insurance cards and studio letters hand-signed by Walt Disney could make Heritage Auctions’ June 19-21 Animation Art Auction one of the biggest ever held. Bidding is now open for these beautiful and historic pieces.

“This sale has as broad a range of material as any Animated Art auction has had,” Heritage’s Animated Art Director Jim Lentz said. “There are items from virtually every classic animated film, and by all of the best artists. The choices range from one of the largest collections of rare production cels, animation drawings, concept art, backgrounds and storyboards from Peter Pan. There literally is something for collectors of all tastes in this sale.”

The Peter Pan Captain Hook Production Cel and Key Master Background is one of 73 Peter Pan lots – including artwork from artists David Hall and Mary Blair – in the auction that make up one of the largest collections of Peter Pan artwork ever offered. Highlights include a Peter and Wendy on the Jolly Roger Concept Painting by Hall (Walt Disney, 1940), an extraordinary piece of concept art (estimate: $25,000+). During early development of the animated feature, a number of exceptional concept paintings were created by Hall, whose contributions to the film are widely known among Disney scholars. 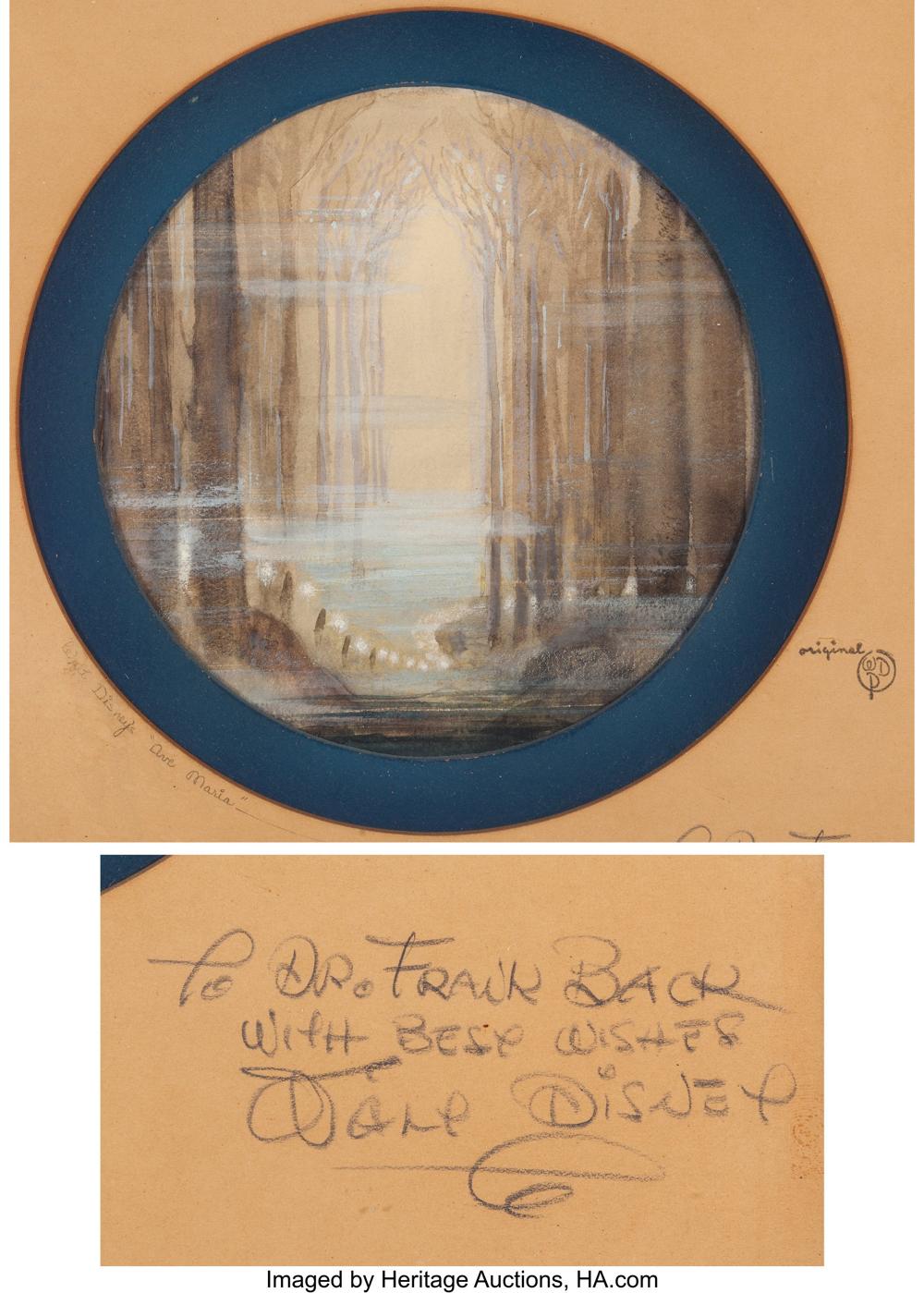 No name is bigger in Animation Art than Walt Disney, and this auction includes an assortment of 25 lots hand-signed by the icon who built the empire that includes films, cartoons and theme parks. His is one of the most famous signatures anywhere, ranking up there with the likes of John Hancock and George Washington, which naturally made him a popular target among autograph seekers, especially after he started hosting a weekly television show in 1954. Disney was wary of signing autographs, for fear of sparking a swarm of people who wanted one of their own, which added to the rarity of his signature. Some Disney artists signed his name to their works, making items signed personally by Disney treasured keepsakes among collectors. Disney-signed lots in this auction include artwork, checks, photos, books, an insurance card, World War II ephemera and a letter on 1940 Fantasia stationery.

Some of the top signed lots include, but are not limited to: 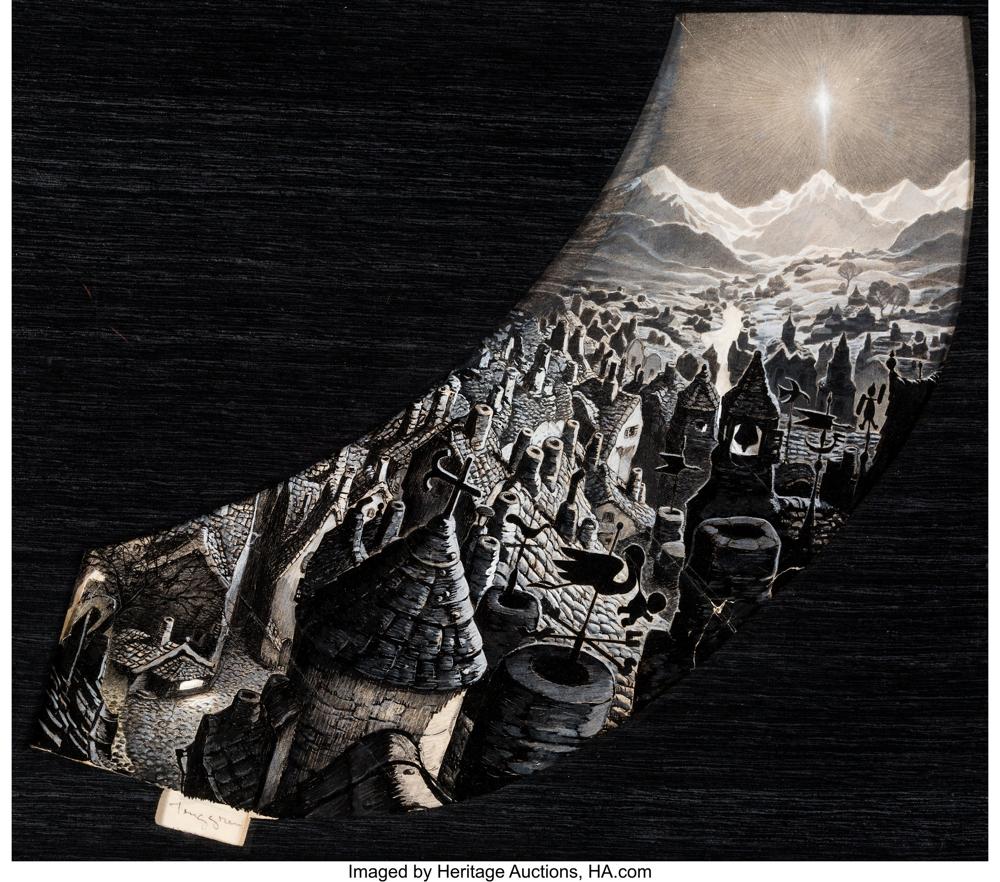 Among the top lots in the sale is a Pinocchio Preliminary Concept Painting by Gustaf Tenggren (Walt Disney, 1940), a stunning concept piece from one of Disney’s most popular classic films. With a pre-auction estimate of $35,000+, it is arguably the greatest contribution Tenggren made at the Walt Disney Studios, ultimately becoming the design of the backgrounds and the overall look of the film, in which he introduced complex backgrounds to enhance the illusion of depth. This lot is a preliminary concept painting that shows Pinocchio’s village at night, with the only visible activity in Gepetto’s workshop. Visible at the top of the painting is the wishing star. This image, created with cut paper, graphite and pastel, was used to create the final background in the first and fifth sequences. The final painted version can be found on page 96 of The Walt Disney Film Archives, The Animated Movies 1921-1968 by Taschen on page 96. The artwork is signed by Gustaf Tenggren in the bottom left. 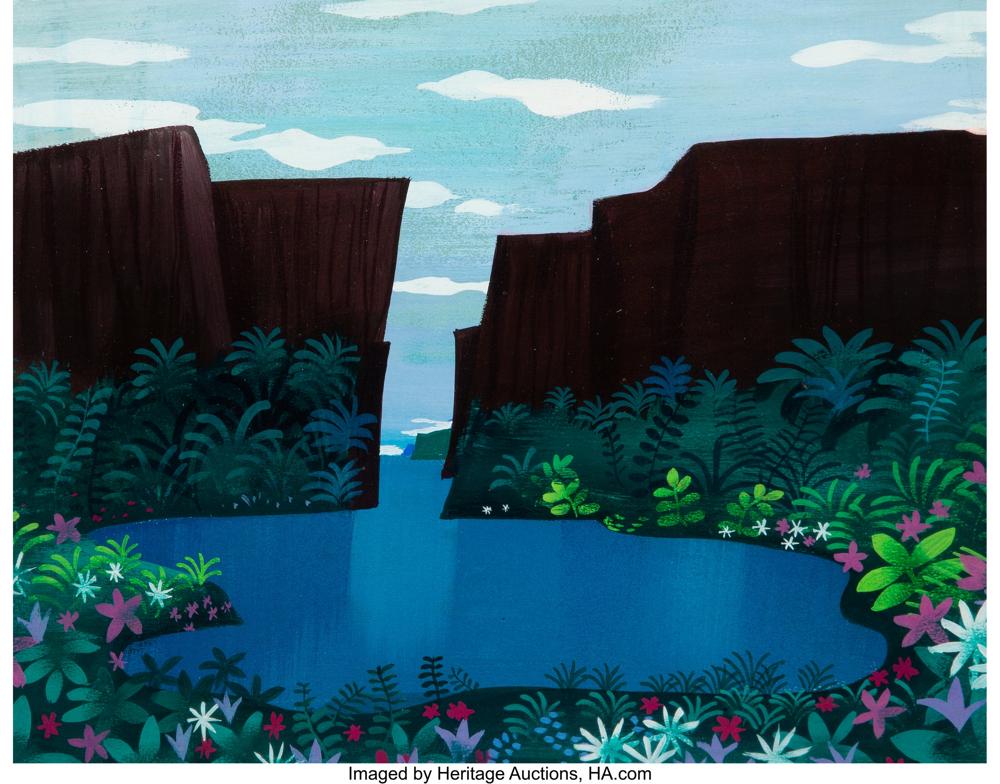 This auction includes more than 40 pieces by Disney artist Mary Blair, who was considered Walt Disney’s favorite artist and was inducted in 1991 into the Disney Legends group. Highlights among the Blair lots are: 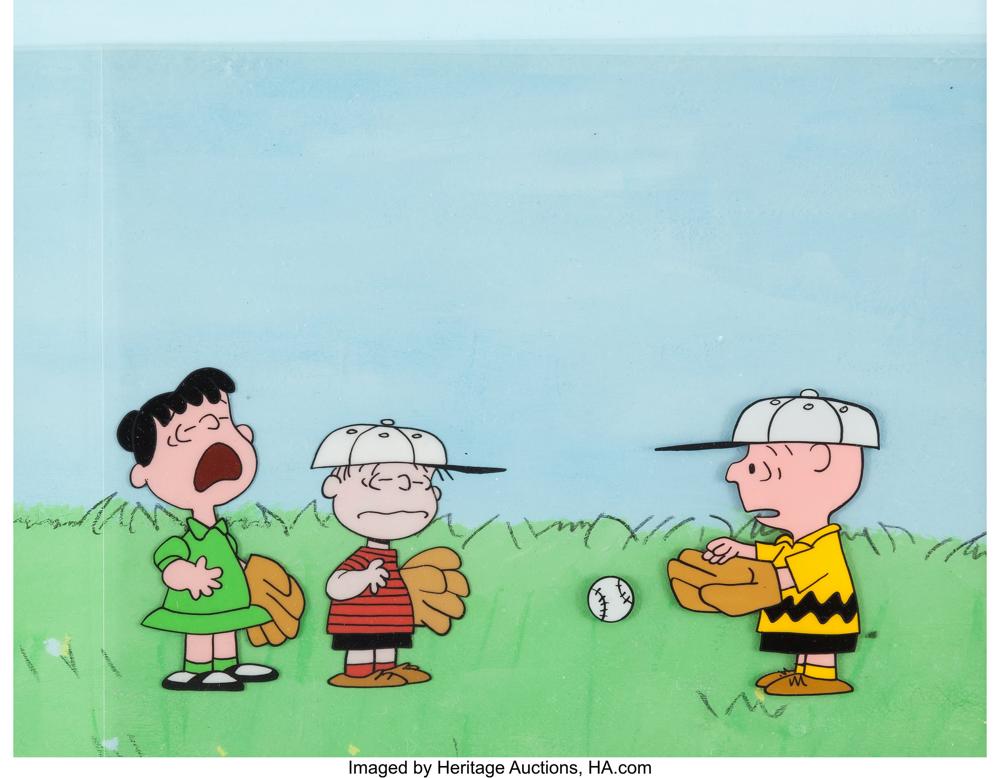 One of the most popular comic strips and cartoons of all time can be had, thanks to 58 Peanuts lots. The selection includes one of the largest collections of single-cel pan progressions of both Snoopy and Charlie Brown – some have up to 15 images in the setup. Many are also signed by legendary Peanuts artist Charles Schulz.

Among the top choices is the A Charlie Brown Christmas Nine Character Production Cel (Bill Melendez, 1965). This rare offering is an original hand-inked, hand-painted production cel of the skating scene from the opening of the first Charlie Brown CBS special, which premiered in December 1965 and won both an Emmy Award and a Peabody Award.

Other top Peanuts lots include, but are not limited to: 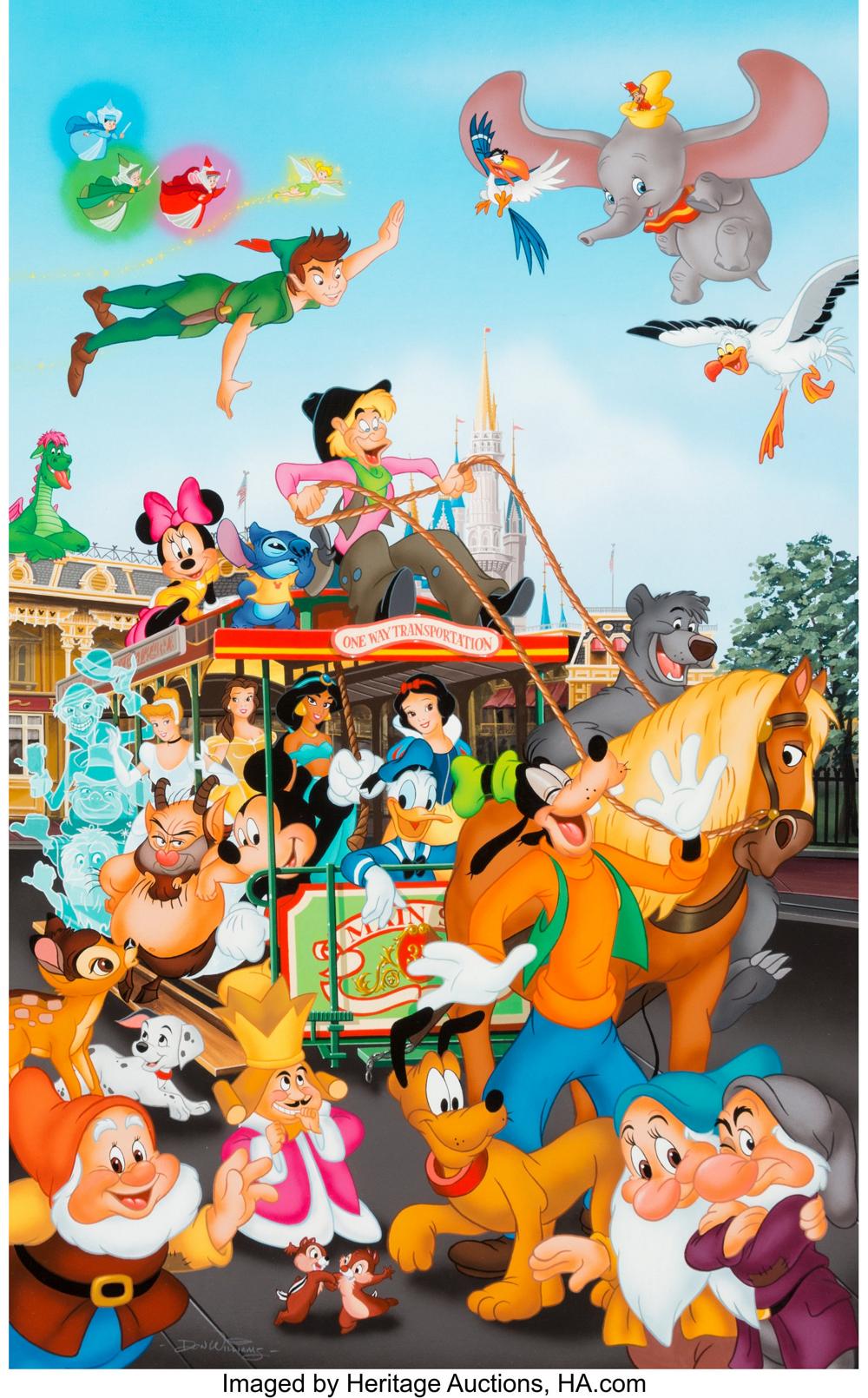 Becoming a Disney artist was a lifelong pursuit for Don “Ducky” Williams, who first wrote a letter to Disney when he was just 10 years old. A 37-year Senior Character Artist at Walt Disney World resort, Williams created the proffered airbrush published illustration “Walt Disney World’s 35th Birthday” (Walt Disney, 2006) for the park’s milestone celebration. The image (estimate: $10,000+) contains more than 30 Disney characters parading down the Magic Kingdom’s Main Street, riding on the trolley, as well as 35 hidden Mickey Mouse ears, the location of which are pointed out in a diagram on the back; Cinderella’s Castle appears in the background. The massive painting has a mat opening of 21 by 32 inches and is housed in a frame that measures 48 by 36 inches, and was used for limited edition fine art prints, posters and consumer products, as well as other retail and promotional items. Both the brush and the instruction sheet are signed by Williams.

Other lots in the sale by Williams include, but are not limited to:

The sale features five lots from the Disney Store that first opened in March 1987 in Glendale, California, and grew into a worldwide chain that boasted 749 stores at its peak in 1997. Each store featured large-scale displays showcasing famous moments in Disney animation history, with the idea of providing visitors with a theme park-like experience. Among the highlights in the sale: 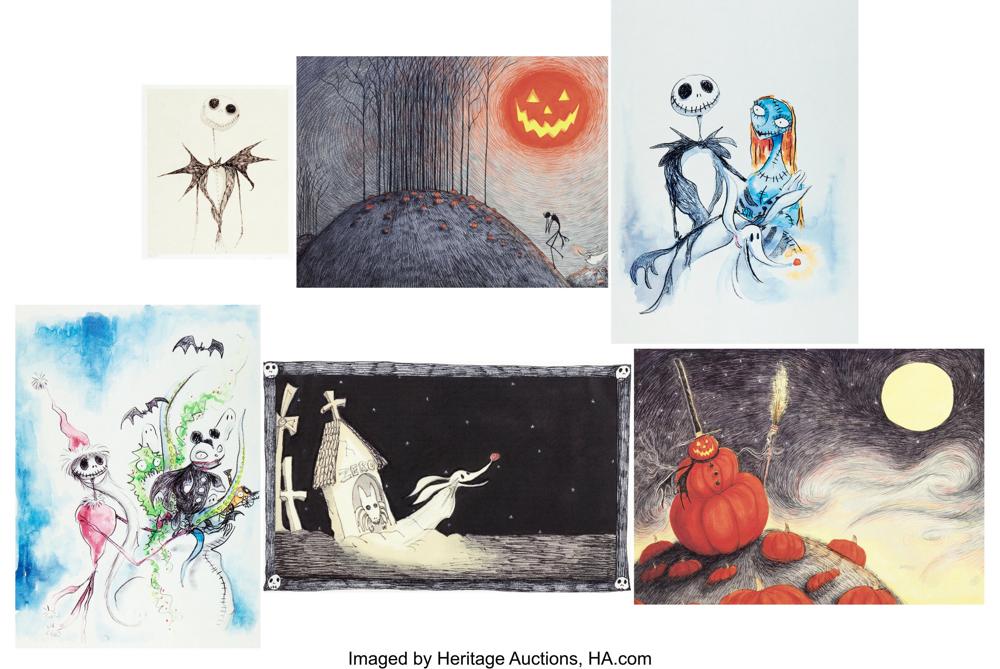 The multi-faceted Tim Burton is widely known as a film director, but his artwork has long been in high demand among collectors, who will have a chance to bid on 30 Burton lots in this auction. Among the highlights: 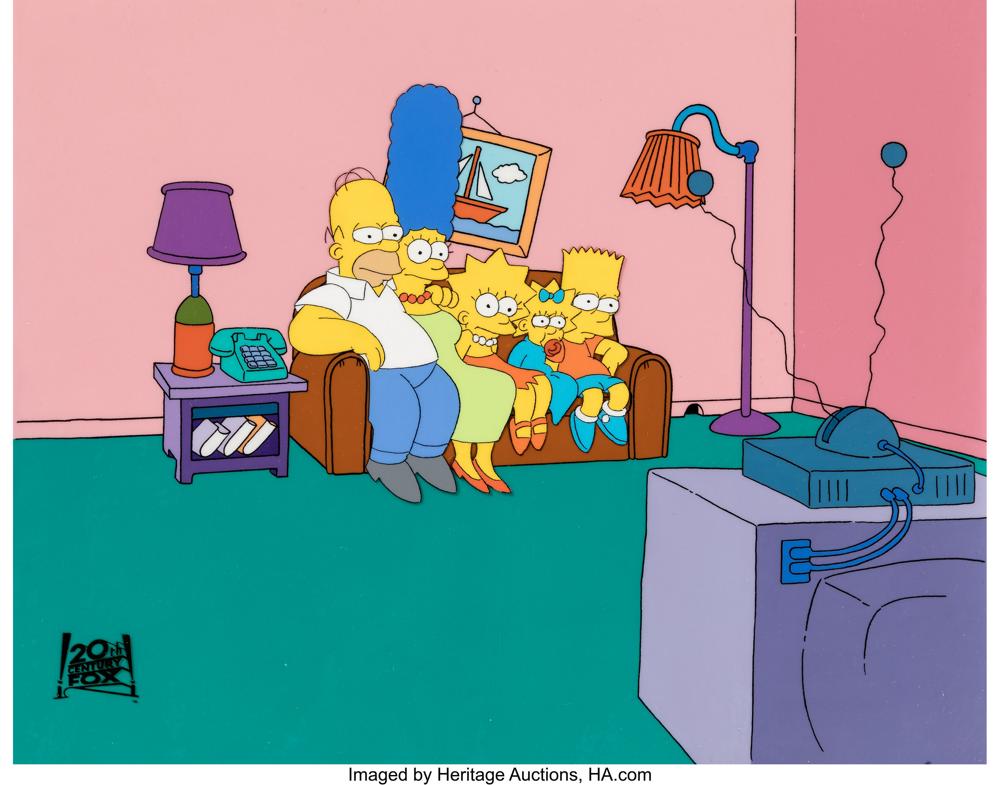 Included in the auction are 48 lots from one of the best production art selections ever assembled from The Simpsons, the longest-running American sitcom and the longest-running American scripted primetime television series, in terms of both seasons and number of episodes. Among those are 27 lots by Bill Plympton, the artist whose contributions to the show include the several of the beloved “couch gag” opening sequences. Highlights from the show include, but are not limited to:

Not surprisingly in an auction of this size and quality, the list of appealing lots continues, including cartoon lots from Hanna-Barbera, Warner Brothers, Looney Tunes and MGM; classic films like Snow White and the Seven Dwarfs, Bambi, Lady and the Tramp and Sleeping Beauty; and Disney Renaissance films like Who Framed Roger Rabbit, The Little Mermaid and Beauty and the Beast.

For images and more information on these and all of the items in Heritage Auctions’ Animation Art Auction, visit HA.com/7232.