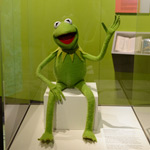 If Disney Jr.’s awesome new Muppet Babies series has whetted your appetite for more Jim Henson goodness, then you’re in for a treat. L.A.’s Skirball Cultural Center will be hosting a special exhibit celebrating the art and cultural impact of the late Muppets creator, June 1st through Sept. 2, 2018.

More than 100 objects, including Sesame Street puppets and Labyrinth costumes, will occupy the space for an exploration of the legacy and impact of Henson’s work. Among the other fantastic pieces on display are character sketches, storyboards, scripts, photographs, film and television clips, behind-the-scenes footage, costumes and twenty puppets, along with an interactive puppeteering station.

The travelling exhibition which is titled “Jim Henson Exhibition: Imagination Unlimited” which was organized by the Museum of the Moving Image in New York, opens at the Skirball on June 1 and runs through September 2. Look out for extended hours during opening day, plus screenings of The Muppet Movie (June 29) and Labyrinth (July 13).

For more info about this highly anticipated exhibit, visit https://www.skirball.org/exhibitions/jim-henson-exhibition-imagination-unlimited

Here is a great clip of Henson on The Dick Cavett Show.