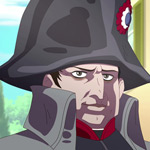 This Thursday, April 12 at 8 p.m., visitors to Italy’s annual Cartoons on the Bay competition and conference will be able to step into a charming family adventure starring one of modern history’s most august figures: Hello Napoleon (Ciao, Napoleone). Produced by Italian studio Mondo TV Group, the 2D project is entered in the Feature Film competition for the Pulcinella Awards.

The film tells the story of the exciting and unexpected friendship between the Emperor Napoleon Bonaparte and three plucky kids he meets upon arriving on the island of Elba in exile. Far away from the battlefield, Napoleon turns out to be a human, sympathetic and even vulnerable character in the eyes of young Giuseppe, Nora and Francesco. The military titan gives advice on besting the local bullies, and in exchange the children become his ears to the ground on Elba.

Hello Napoleon is directed by Fabio Di Ranno, who penned the story and screenplay with Valeria Giasi — both have written for Mondo series Sissi the Young Empress and Dinofroz. Igor Chimisso (Gormiti) is the character designer, and music is provided by Dario Vero (Animagrad’s The Stolen Princess; Sissi).

The 22nd Cartoons on the Bay festival for children’s cross-media and television animation returns to the beautiful Palazzo Carignano in Turin from April 12-14, bringing together about 1,000 industry pros and 600 works in competition. (www.cartoonsbay.rai.it/en)

“I’ve Got a Really Good Feeling About This”: ‘Solo’ Trailer Takes Off
Illuminated Films at 25: A Very British Kind of Magic