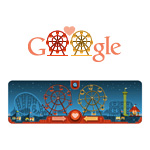 We couldn’t get enough of Google’s wonderful animated tribute to Valentine’s Day and the 154th birthday of George Ferris, the inventor of the Ferris wheel this year. The Feb. 14th interactive Doodle features two Ferris wheels, packed with different animals. Once you click on the heart button, the wheels spin and pictures of two different animals appear. The two animals make a love connection and then, another click, will show you the two animals out on a date—a bear and an octopus go out for sushi, or a turtle shows up late (of course) for a romantic dinner date with a frustrated rabbit.

“Early in the process we decided on depicting a scene with two, side-by-side Ferris Wheels among a landscape of other amusement park rides,” notes Google’s Doodler Brian Kaas. “Then when two Ferris Wheel carts happened to stop across from each other we thought that was the perfect moment for two characters to have a love at first sight moment. We thought it would be fun to push a big button to generate a whole series of combinations.”

Kaas says the team ultimately decided that the cast of characters should all be animals and the result of their initial encounter should be a date.

“We simplified the characters and focused on making the animals as engaging, colorful and personable as possible without worrying about their day jobs,” he explains. “For the resulting dates, we used newspaper comic strips and their three-panel composition as inspiration for style and narrative structure. The comic strip format gave us room to tell a wide variety of stories and the horizontal format worked nicely in our layout. Once we decided on comics, the date scenarios really just starting writing themselves. As always, we had more ideas than time to illustrate and animate.” 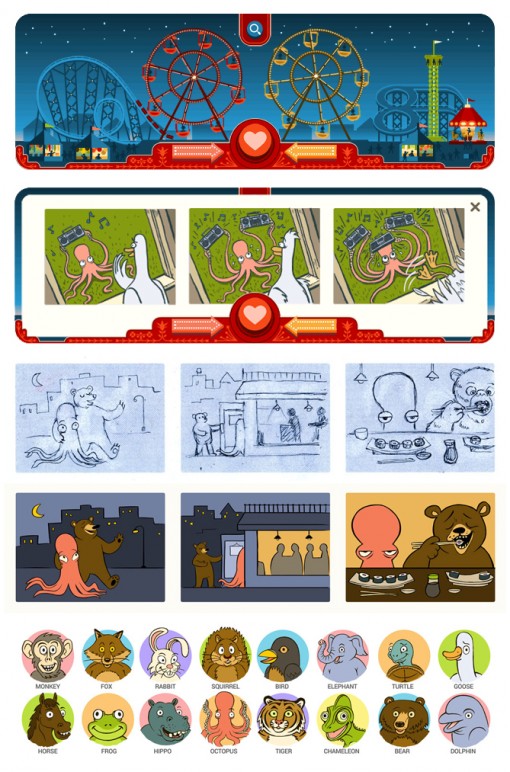