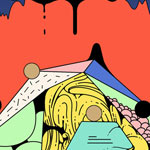 The 2018 GLAS Animation Festival, taking place March 22-25 in Berkeley, CA, is accelerating towards a third exciting addition. This week, organizers have revealed the official trailer — featuring clips from internationally notable films in competition and music by Málkona — as well as the line-up of special programs and full schedule, and an awesome new opportunity for up and coming animation stars from FX Networks.

Registration is available online through March 12.

This year’s program is an eclectic mix of auteurs and commercially successful filmmakers from around the world. Some of the highlights include conversations with Phil Lord & Chris Miller (The LEGO Movie) and “CG wunderkind” David OReilly, who will detail his latest groundbreaking project Everything; talks by director Jorge Gutierrez (The Book of Life, Son of Jaguar) — titled “The Tacos of Success Are Dripping with the Sauce of Failure!” — and the inimitable Sawako Kabuki; spotlight screenings on Masaaki Yuasa and Croatian Animation; studio presentations and portfolio reviews by Nickelodeon and Cartoon Network; panels with Google Spotlight and Pixar; and much more.

In addition to the festival competition, the 2018 GLAS will bestow the FXX Elevation Award, presented by FX Networks. The award recognizes excellence in animated filmmaking and will honor a film in competition that embodies distinctive characters, bold storytelling and a singular point of view. The winning director will receive a $25,000 grant to develop an original animated project with FXX.