Virtual Reality buzz permeated the 2016 GDC. Market analyst PitchBook reported that investors poured over $4 billion into VR startups since 2010, for over 200 developers and a dozen headset makers. At the GDC, long lines of gamers waited for 360-degree game and film demonstrations, and dozens of presentations discussed how VR visuals, audio and storytelling differ from traditional production.

Although VR has been used for decades for pricey military simulations, its use for consumer games with high-resolution headsets is still very new. In spite of all the expertise at the show, it appears there are still more questions than answers.

One hotly discussed topic was game suitability for VR. Games with rapid movement all around the player and many Non-Player Characters (NPCs) — such as Deus Ex, Left 4 Dead and PlanetSide — may not be the best match for VR with Head Mounted Displays (HMDs). Such games can be overwhelming in 360, and players who constantly whip their heads around to cover their “6 o’clock” areas may experience motion sickness. Some booths handed out ginger ale to alleviate dizziness.

Many developers recommended avoiding twitchy first person shooter (FPS) games for VR, and trying slower, more emotional role playing and exploration games with moderated movement and fewer characters. Some cautioned, “For VRing, trade motion for e-motion.” That being said, there were some terrific game demos that took full advantage of the 360 medium.

One of the more than 30 VR games released with the Oculus Rift system is Eve: Valkyrie. This game has been described as the “first killer app” for VR. The game’s creator, CCP Games, reached critical success with Eve Online, a Massively Multiplayer Online Role Playing Game (MMORPG) in a huge sci-fi space setting that enables players to create customizable ships, form fighting groups, and conquer galaxies.

For its first dip into VR, CCP started two development teams, one in Atlanta and one in Shanghai, to create short “experiences” in VR to see how gamers responded to them. CCP’s CEO, Hilmar Petursson, believes in rapid prototyping in the vein of “start small, and listen to your audience.” CCP is betting big-time on Eve: Valkyrie, which is bundled with pre-orders of the $599 Oculus Rift headset; it will also be available for Sony’s PlayStation VR.

The game gets kudos for having an in-game training program that explains the controls, guns, countermeasures, and look-to-lock missiles, as well as presenting backstory and letting the player acclimatize to the 360-degree “Wow” factor. Without this, a gamer could easily get lost (and frustrated) as gameplay starts when his/her fighter is shot out of the mother ship’s tube and into intense battle.

Lead designer Andrew Willans stated, “It would be crazy to assume that everyone who buys an Oculus is a hardcore gamer. I don’t think that’s the truth.” The game thus has features to keep non-shooters happy, including a “scout” mode where the player can fly around and enjoy the sights and sounds of the environment—and get an introduction to VR. It also allows player-versus-machine combat, to hone skills at different levels before going against human players.

CCP’s spirit of cautious exploration in this very new medium is reflected by Petursson, who was asked where VR is going in the future and replied, “We’re not entirely sure.”

Another noteworthy game is Adr1ft. Some might not want to play this game from studio Three One Zero with “old-fashioned” 2D screens, which is why it’s launching with the Oculus Rift. One of the plus features of 360 VR is the enjoyment of exploring immersive worlds, and Adr1ft is a great example. You start off in a spacesuit in a ruined space station, with your air supply running out. If you find more air and survive, you explore to find out what happened to the former station inhabitants before the explosion. You constantly hear yourself breathing and using up oxygen, like a SCUBA diver facing a shark, and have to take risks and make decisions to keep on keepin’ on.

Like CCP’s CEO, Three One Zero’s creative director Adam Orth tried out many ideas—such as having lots of things fly around in zero gravity—in the new medium, and wound up scrapping them. “A lot of the things that I thought this game should be didn’t work,” he explains.

Adr1ft is surprisingly emotional—it’s hard not to panic when running out of air, and there are lots of human touches, like living quarters with personal items and sticky notes on computer screens. This, together with very high levels of fascinating, smoothly-rendered details, keeps the game thrilling and scary, even without guns or violence. The lack of weapons makes the game relatively simple, and there is a tutorial to help, as well. Altogether, a tour de force that’s a great intro to VR gaming. 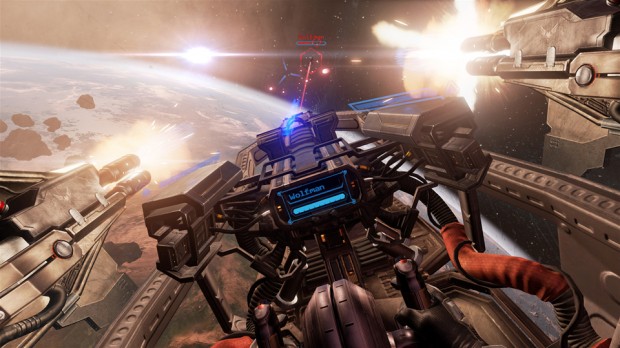