The landscape of the videogame market is a very challenging one for new game creators. Large-scale online game worlds are very expensive to develop, costing $30 million and up. Virtual Reality gaming is a new area, but populating the 360-degree worlds of such games is likewise costly. Casual mobile games can be affordable for a young startup—but 100,000 such games hit the market in 2015, making it difficult to stand out from the crowd. Are there game niches that are both affordable and uncrowded? Professor Bob de Schutter, a developer and professor at the University of Miami, described just such a market at the GDC: videogames for seniors, gamers over the “official” AARP age of 50.

Size of the market. Many believe the largest games market is for youngsters under 18, but de Schutter said that the over-50 market is already larger than this, with 37 million just in the US. He noted that that developers design for the younger market and ignore older players. “A major reason for this,” he said, “is that development teams tend to be very young as well.”

The middle-to-old-age market is growing faster than any other segment. “By 2025, there will be 63 million gamers over 50,” according to de Schutter. “By 2045, 105 million, some 44 percent of the total US market, will be in a sector now largely ignored!” He noted Japan and Europe also offer huge seniors markets.

Game types that sell to seniors. Many games targeted at seniors imply they can seriously improve the brains of their players. Games with titles such as Brain Training: How Old Is Your Brain? or Hang Onto Your Marbles could be considered insulting. Seniors dislike such games, according to de Schutter, because they imply they are inferior and need to be “fixed”. They also don’t actually improve cognitive skills, according to major research by the University of Cambridge. A reason for this may be that they lack a “fun factor” and seem more like work than play.

Seniors polled agreed overwhelmingly on the “lack of attention by the mainstream game industry” to their interests. They felt many games had too much emphasis on graphics and not enough on innovation.

What seniors like, according to researchers such as Dr. Celia Pearce, is games that involve exploration and puzzle solving. They are less fond of frantic FPS (First Person Shooter) games. They also like games with so-called scaffolding; easy instructions on how to play the game so they don’t get lost or frustrated. Major motivations for seniors to play games, according to Pearce, are: Achievement (Completion of Missions/Tasks); Immersion/Escapism (“Once Upon a Time”); and Discovery (Strategy and Exploration). They are more interested in intellectual challenges than physical reflexes. Senior gamers play on PCs (>80%) or mobiles (>30%), and much less on consoles (<25%).

Seniors play social games much longer and more often than single-person games. Experts strongly recommend providing tools to let seniors connect with others of like interests. They enjoy online social games such as WOW (World of Warcraft), for instance, but want to avoid groups of younger players whom they consider often verbally abusive and “mean.”

Benefits to seniors. Games are an activity where seniors can actively participate, even if aching knees no longer allow them to play basketball or soccer as in days of yore. They can report that they really enjoy socializing with younger members of the family such as grandchildren. Seniors are increasingly becoming mentors in MMORPGs (Massively Multiplayer Online Role Playing Games), and have the time and patience for that role.

Recent research published in Nature shows greatly improved cognitive control from 3D games such as NeuroRacer which force perceptual discrimination and hand-eye coordination tasks simultaneously—but as fun, not for “fixing” the players. Brain scans showed increased capacity to multitask, both in the game and in real life. Physical games with Nintendo’s Wii controllers can get even the very old off their chairs at retirement homes to become movers and shakers.

Seniors also learn from games such as Papers, Please (the trials of an immigration officer), Synonymy (a word game) and Elegy for a Dead World (exploration of worlds inspired by Shelley, Byron, and Keats). Most such games are produced by small indies, such as Journey, by thatgamecompany, an exploration game for partners that cannot communicate by speaking or writing, which features creative, peaceful challenges with simple graphics instead of hack-and-slash in high-rez worlds.

The GDC presentations summarized this area as a huge, largely undiscovered segment with the potential for long-term profit and contributing to the health and happiness of many. Sounds like a no-brainer, and all it takes is some inventiveness—and a couple of (very) adult staffers. 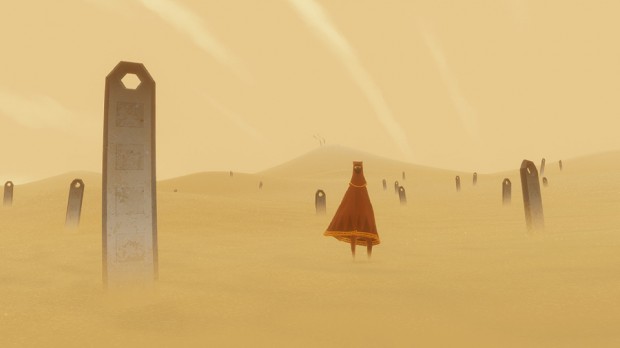