In addition to pure single- or multiplayer games in virtual reality, several studios are also producing movies and “experiences” for this new medium. One of the most promising of these is Baobab Studios of Redwood City, California, which is creating VR animated stories. A strong indication of industry belief in VR is not only the amount invested in Baobab ($6 million), but the pedigree of investors, including Samsung Ventures, Zynga cofounder Mark Pincus, PayPal cofounder Peter Thiel, HTC, and Comcast Ventures. Oculus (and Facebook, which bought it for $2 billion) also generously supports pioneering VR efforts such as this.

Baobab showed a sneak peek of its first animated VR film, Invasion, at the VR pavilion of the GDC. The film was shown on the Samsung Gear VR, which is powered by Oculus. The company is also working with HTC, the Taiwan company that makes the Vive VR headset. Baobab’s founders, Maureen Fan and Eric Darnell, have impressive industry track records. Fan was VP of games at Zynga, where she oversaw projects including FarmVille, which accounted for 40 percent of revenue. Darnell was co-creator and director of the wildly popular Madagascar film series (all three of them) and director of Antz.

Most VR films right now are short, around 10 minutes or so, and Invasion follows that path. The reason for this appears to be both customer acceptance and evolving technology.

“No one yet knows how long viewers will want to want to watch a movie with a VR headset,” Darnell noted. Fan said, “From a technology viewpoint, tech changes so quickly that by the time we could finish a full length film, the tech would be obsolete.”

Darnell adds, “We did a lot of experimentation and discovery of technology and storytelling with this film, which we’ll use in future releases. There are no textbooks on this new medium yet—you have to experiment with it.”

Invasion is fun to watch, and shows masterful touches. As is the case with VR content in general, viewers with headsets have to watch they don’t crash into people standing nearby, especially if their arms are flailing. The film starts out with a cuddly animated rabbit that comes up to check out the viewer. Then a threat appears—an eagle on the far right side, up in the sky. The eagle shrieks and the bunny turns its head quickly to look at it.

This scene illustrates two rules of the new medium, according to Darnell. The first concerns Point of View (POV).

“In a normal film, you can control the viewer’s POV simply by moving the camera. With a 360 view, you can’t control that, so you have to strongly suggest where the viewer should look, with visual and audio cues. It’s too confusing for the viewer to constantly search 360 degrees for incoming events.” The second lesson is about audio—whereas regular films have either stereo or 5.1-channel surround sound, these don’t normally work for VR. “Audio is necessary all the time for 3D spatialization,” Darnell says. “That means that most sources must be in mono, so the viewer can precisely locate where the sound is coming from, such as the eagle’s location swooping down from the sky.”

Baobab’s $6 million is not the only funding for VR films. Filmmaker Jaunt raised $65 million in 2015 from investors including Disney, and NextVR got $30 million from a group led by Comcast Ventures. No one really knows which VR platforms will dominate or how such films will be monetized, other than as package deals with hardware. It is inevitable that VR films and games will eventually have crossovers. There is also great interest in re-purposing the digital assets of conventional 3D movies for 3D content. Oculus, Weta Digital and Epic (the home of the high end Unreal videogame engine) recently formed a partnership to turn scenes from 3D blockbusters such as Lord of the Rings into VR experiences and games.

The full Invasion film, which describes the zany adventures of two bunnies defending the world against space invaders, will premiere at the 2016 Tribeca Film Festival, which this year is highlighting VR film features. Invasion is a great introduction to this new world. 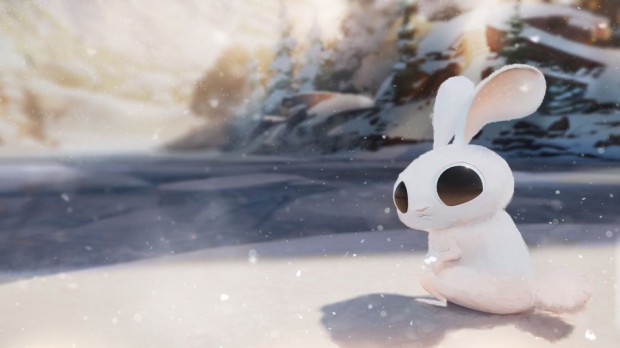