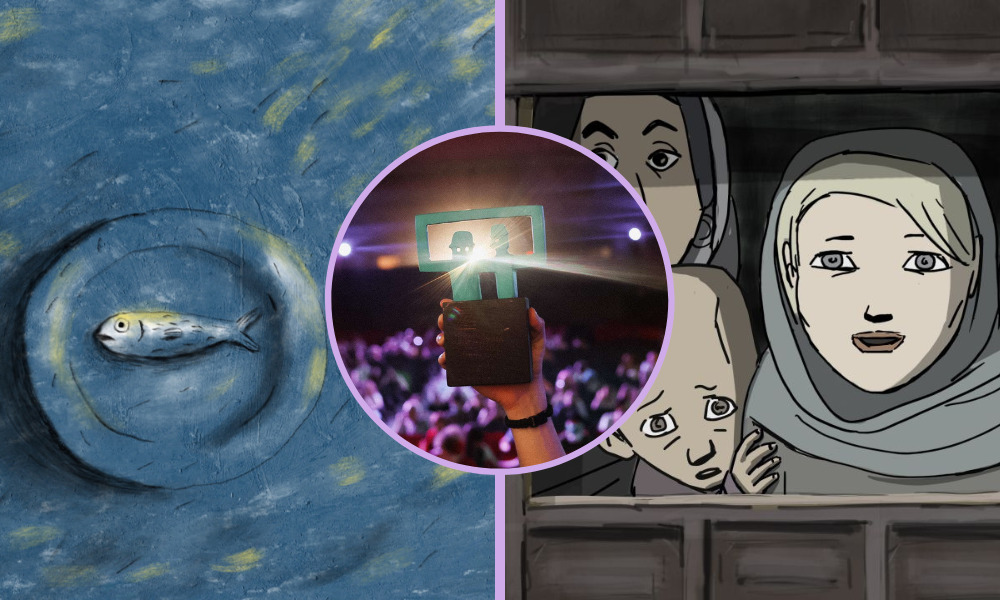 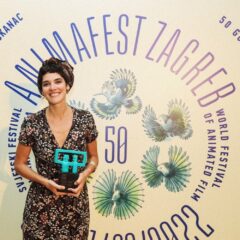 The jury’s statement reads: “Many things impressed us in this film. The naturalism of the dialog. The warmth and intimacy of the family setting. But most of all, the tenderness with which it tells its story of generosity in the midst of political and economic hardship in Portugal. And also, the monkey.”

For the fifth time in the half-century history of Animafest, the Grand Prix winner also won the Audience Award Mr. M for short film. 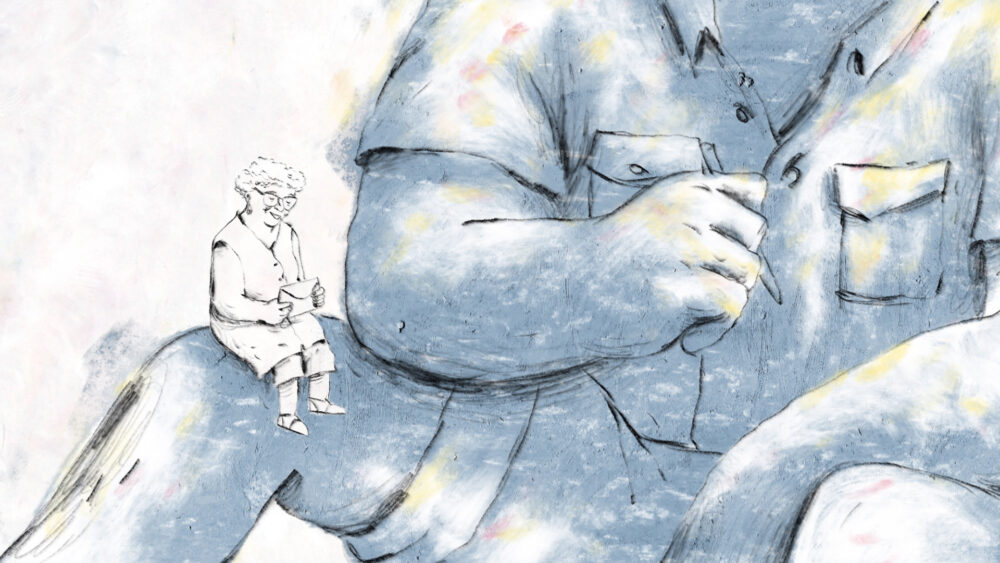 The same jury gave the Golden Zagreb Award for Creativity and Innovative Artistic Achievement to Chilean director Hugo Covarrubias for his film, Bestia (produced by Trebol 3 Producciones and Maleza Estudio).

“Many films at the festival touched on the subject of political violence. But nowhere was the coldness of state brutality more memorably expressed than in the hard, still face of the puppet in this film, whose story evokes the horror of Chile’s fascist dictatorship,” the jury wrote.

The Zlatko Grgić Award for the best first film made outside an educational institution went to the French-Israeli film Letter to a Pig by Tal Kantor (produced by Miyu Productions and The Hive Studio).

“We counted many pigs among this year’s films. A pig can be repulsive and sweet, brutal and smart, and this film places this complex animal at the heart of a richly ambiguous, elegantly designed story with an unusual perspective on the Holocaust,” the jury noted. 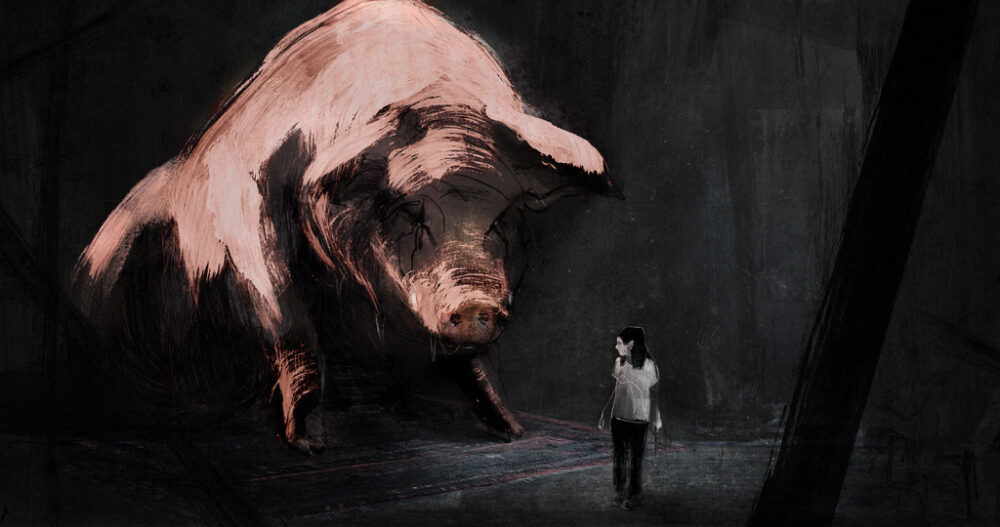 Letter to a Pig

Jury members also awarded special mentions: Grubić recognized the Polish-Canadian film Impossible Figures and Other Stories I by Marta Pajek (Animoon/NFB), “because this film takes us on a journey through a post-apocalyptic, deserted city, in which the protagonist reflects on her personal and collective history in the twilight of her life. The theme and the minimalist style, which achieves a strong poetic effect, together raise issues that are becoming even more relevant in the current socio-political time. Have we learned anything as a civilization, or are we going around in circles?” Grubić mused.

Dudok de Wit was particularly impressed by the conciseness and fine malice of Malte Stein’s Thing (Ding; Germany), created in the author’s independent production, “which didn’t make me think so much as feel: disgust, even revulsion; acute anxiety; and elation as I burst out laughing at the end,” he explained.

Mills presented his special mention to the French film Swallow the Universe by Colombian filmmaker Louis Nieto (Autour de Minuit). “I’ve never taken acid but I imagine that this is what it would be like. The film is an amazingly vivid journey through a bizarre jungle landscape, very
skilfully executed — it is an astonishingly intense and memorable experience,” said Mills.

Nedeljković, chose the Slovenian-German-French film Steakhouse by
Špela Čadež (Finta Film/Fabian & Fred/RTV Slovenia/Miyu). She pointed out, “This film found an effective and visually strong way to talk about domestic and verbal violence, topics that many people went through, but were never able to talk about.”

Finally, Driessen gave his special mention to Joachim Hérissé’s film Skinned (Écorchée) (Komadoli Studio; France) — a gruelling story about two sisters attached to each other by the leg. “The scary patched-up dolls reminded me of Caroline Leaf’s The Two Sisters. I loved the scene where one of the sisters cuts off her leg and the way the dripping blood is depicted in the style of the overall design,” said Driessen. 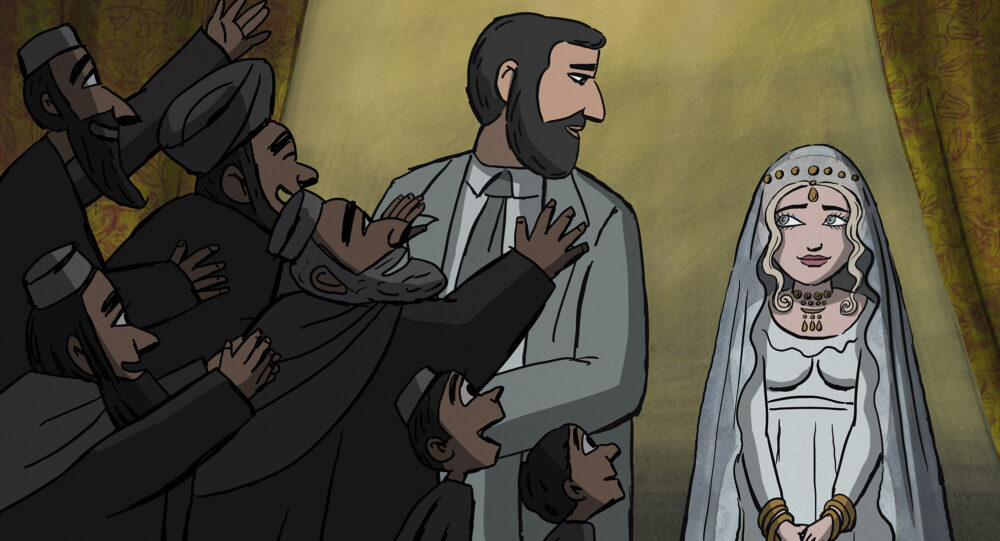 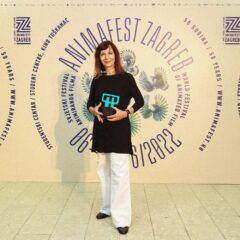 The jury of the Grand Competition – Feature Film, consisting of Olga Pärn, Aya Suzuki and Anastasiya Verlinska, the Grand Prix went to the Czech-French-Slovak film My Sunny Maad by Michaela Pavlátová (Negativ/Sacrebleu Prod./BFILM), “a masterfully directed story that blurs the lines between despair and hope, making one live through the pain of rejection and warmth in acceptance.”

The Feature Film jury decided to award two special mentions. The first goes to the Japanese-French film Dozens of Norths (Ikuta no kita) by Koji Yamamura (Yamamura Animation/Miyu), a stand-out feature portraying surrealist streams of consciousness, never seen before in drawn animation. “A masterfully painted canvas of dreams and fears, disturbing us both with visuals and music,” the jury said.

The second special mention was given to the French-German-Czech film The Crossing (La traverse) by Florence Miailhe (Les Films de l’Arlequin/Balance Film/Maurfilm/XBO Films), “an outstanding showcase of the true potential of animation, accentuating the story through this powerful art form, which emotionally connects its audience with the characters on their journey towards freedom.” 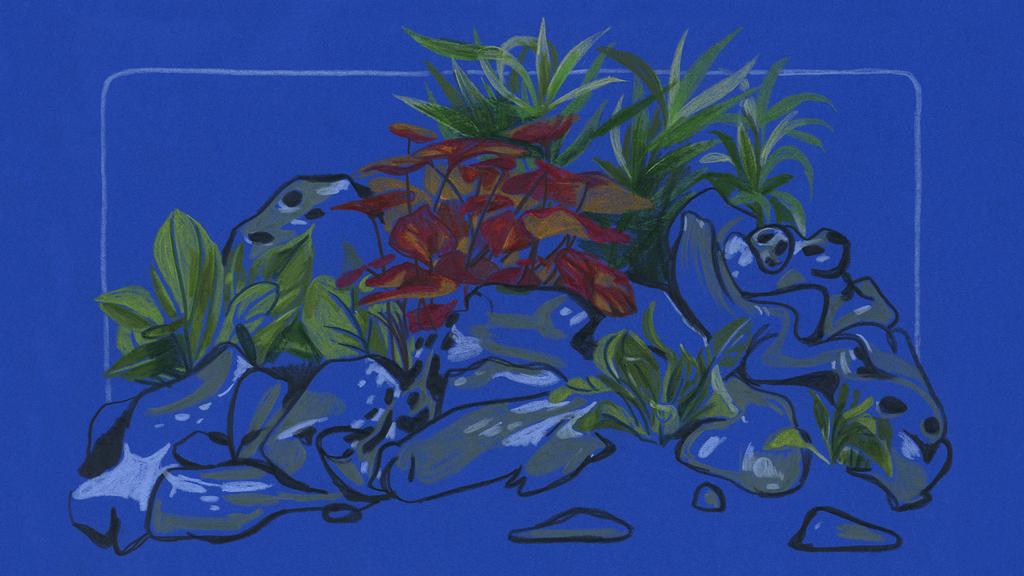 The combined jury of the Student Film Competition and the Croatian Film Competition consisting of Alexandra Ramires, Jelena Popović and Igor Prassel decided to award the Dušan Vukotić Award for Best Student Film to the French-Taiwanese film Butterfly Jam (La Confiture de papillons) by Shih-Yen Huang, made at ENSAD (École Nationale Supérieure des Arts Décoratifs); a daughter’s personal story using a metaphor of endless deaths of domestic animals to illustrate a relation with her careless father. “Shih-Yen Huang led us skilfully on a
hypnotizing journey through lifeless spaces of their home.” The financial prize of 1,000 euros is awarded by Zagrebačka

This jury gave special mentions to the films Mom, What’s Up with the Dog? (Maman, il a quoi le chien?) by Lola Lefevre (Atelier de Sèvres; France) for a coherently executed, intriguing story about wild instincts of blooming sexuality clashing with unnatural moral taboos of our society; and The Immoral (l’Immoral) by Ekin Koca (La Poudrière; France), because it shows us how damaging passiveness and aggressiveness can be upon the human condition. Using a very efficient minimalistic animation for the theme approached, it tells a story full of black humor which represents a very common way of life. 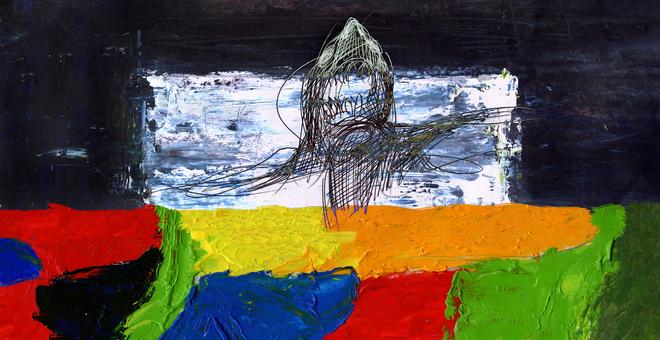 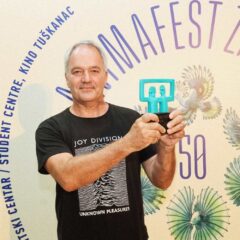 The best film of the Croatian Film Competition was 11 by Vuk Jevremović, “for its relentless filigree of lines and colors morphing in wild synchrony with the pressure from the bloodstream and from the stands, for its masterful kinetic exploration of the human, the animal and the ball within the angst of a penalty kick.” He is also entitled to 1,000 euros awarded by the Croatian Film Directors’ Guild.

Special mention went to Jelena Oroz for Letters from the Edge of the Forest (Bonobostudio), for “the originally beautiful art style, smooth animation, perfect editing and rhythmic music accompaniment, but first of all for making kids learn to write, eat a lot of yummy fruits and vegetables and, most importantly, not to be greedy and instead be a good comrade.”

Special mention for the best Croatian minority co-production goes to Tomasz Siwiński’s Love in Times of Coal-Based Economy (Miłość w czasach gospodarki opartej na węglu), co-produced by Letko and Adriatic Animation, for “its visual coherence and the way it approaches the themes with an aesthetic that helps us understand human warmth in the middle of a cold winter, this film leads us to reflect on the weight of an industrial landscape in our evolution.” 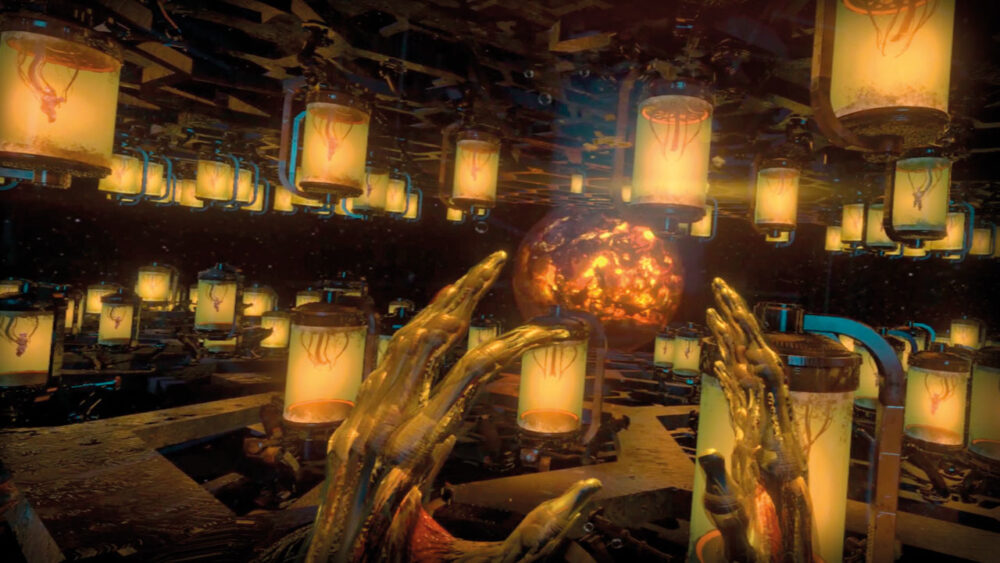 The winner of the VR Animation Competition was chosen by a jury consisting of Eva Cvijanović, Milen Alempijević and Franziska Bruckner. The award was given to the Taiwanese work Samsara by Hsin-Chien Huang (The Virtual and Physical Media Integration Association of Taiwan)  — “this immersive journey through time and space took us to breathtaking parallel universes and expanded our consciousness, creating an exceptionally crafted experience.”

A special mention was given by the jury to the Canadian-Belgian project Marco & Polo Go Round by Benjamin Steiger Levine (Item 7/Belga Productions), because “some events turn your world upside down.” 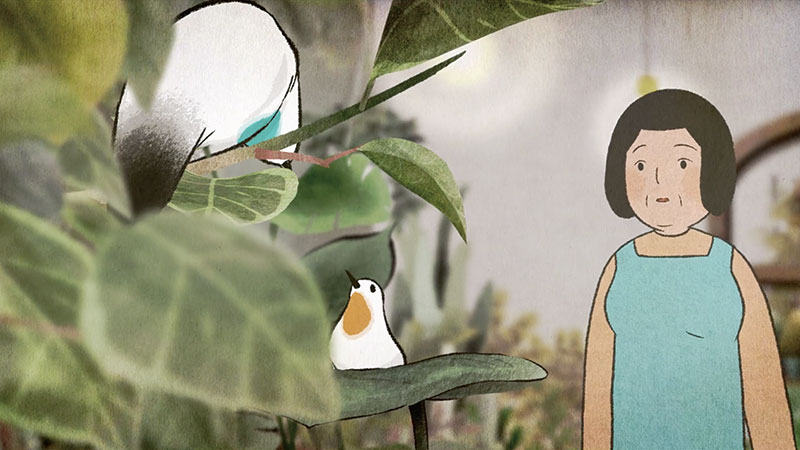 The winner of the Films for Children Competition was chosen by a jury consisting of Ema and Jakov Barbarović, Gita Gugo, Lala Spremo and Nika Vrbanić. The jury awarded the main prize to the Korean film Piropiro by Miyoung Baek, “a film with magnificent visuals and animation technique that are well connected: 2D animation and digital
drawing. The central message of the film that really impressed us speaks about how the only thing stopping us in life is fear and ourselves, while the important thing is to try,”said the jury.

A special mention went to the French-Georgian film Franzy’s Soup Kitchen (La Soupe de Franzy) by Ana Chubinidze (Folimage/Pocket Studio), a film with an important message: that it’s more beautiful to share than to keep everything to yourself. “The film has stunning character design, attractive colors, elements of humor and accentuated visual aesthetic,” the jury concluded. 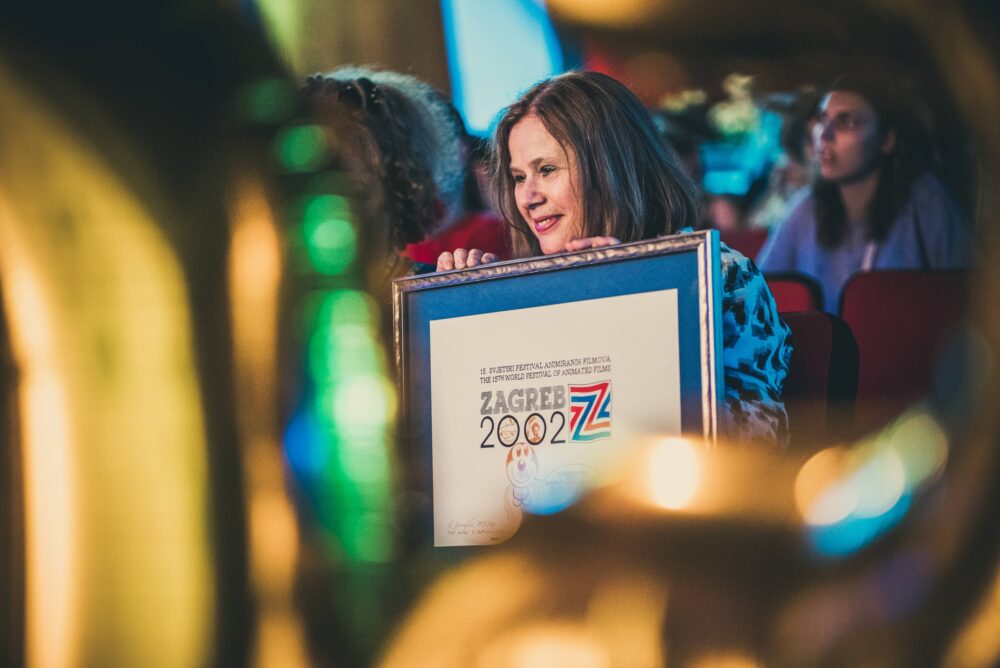 Ahead of the awards ceremony, the festival presented its special award, The Heart of Animafest, to Margit Buba Antauer for her half a century of commitment to the World Festival of Animated Film.

“I am seldom speechless, seldom confused, seldom shaken to the core, but that is what happened to me today,” Antauer told the audience. “I once received one award from ASIFA in Annecy, but this one is ours today, among us, and for a festival that is really a part of my life because I gave it so much love and effort. I always hoped to live to see this 50th birthday and what I see today. As long as we have a team like this and as long as there are audiences and authors who love Zagreb and come to it, as long as they are there — we will have a festival. I hope it will last at least another 50 years.”