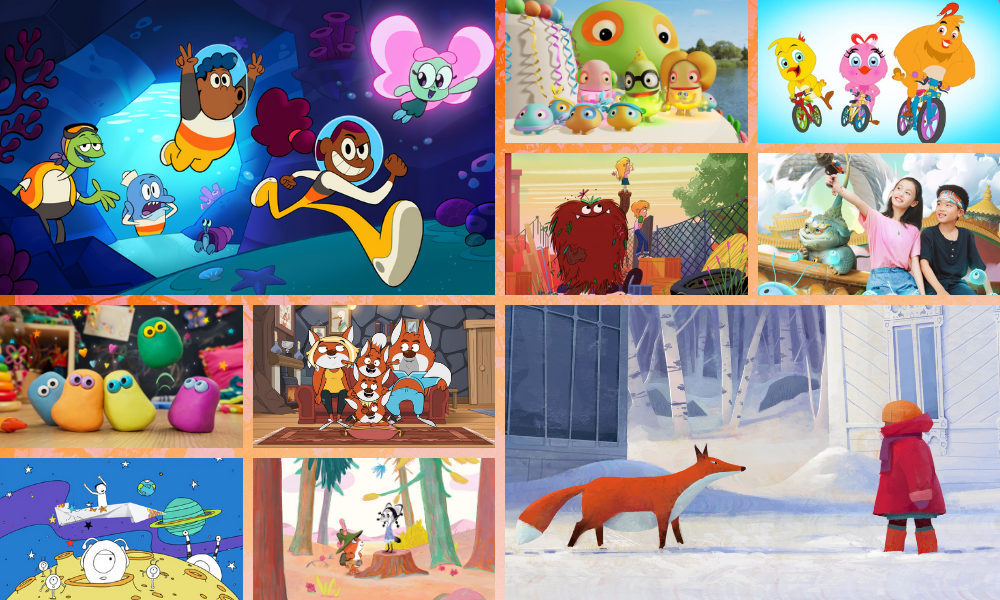 The annual content market will be returning to the Palais des Festivals in Cannes this month (Oct. 11-14). If you can’t make it there in person, you can also join digitally to participate online. (Online prices begin at 300 euros and allow participants to enjoy the site’s content through Nov. 31.) Here are some of the latest announcements about new animated shows that will be unveiled at the market at press time: 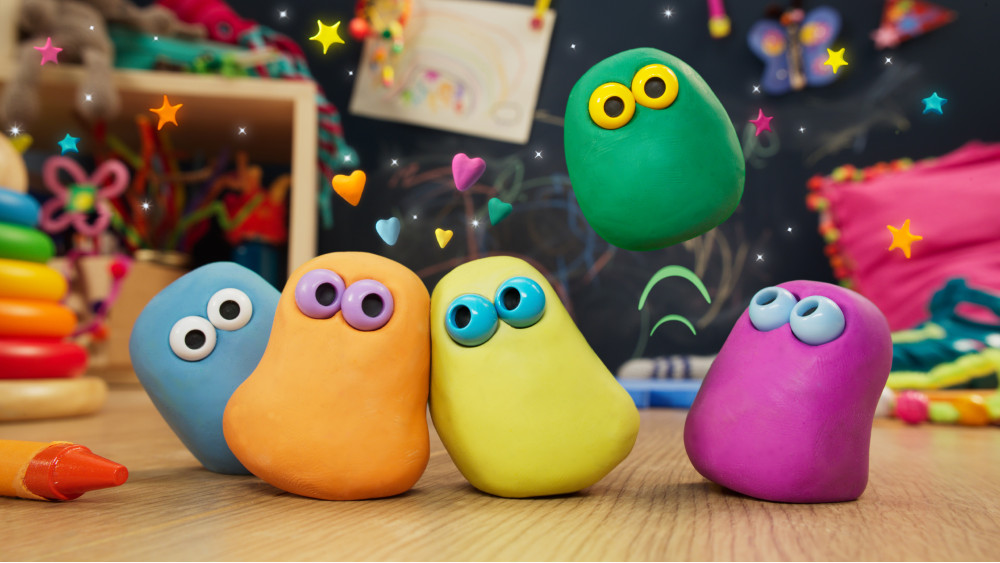 Everyone’s favorite Bristol-based studio Aardman Animations is moving full steam ahead with its new clay-animated preschool show The Very Small Creatures. Aimed at one- to three-year olds, the recently greenlit show follows the adventures of five genderless, toddler-like clay creatures who explore a child’s play area when there’s nobody around. In each episode, Pink, Blue, Orange, Yellow and Green explore their surroundings and learn about the world around them, each other and themselves. As it has become customary in many animated kids’ shows these days, the series emphasizes kindness, empathy and teamwork. Luckily, each episode is also packed with comedic moments. Sky Kids has already commissioned 20 three-minute episodes. The five characters first debuted back in the ’80s when they were introduced in Aardman’s classic show Morph.

The new series, which will premiere on Sky Kids in November, marks the series directorial debut of animator/artist Lucy Izzard. “It’s a show driven by five very cute clay creatures that act and behave like toddlers, learning about their physical world, themselves and each other,” she notes. “My two preschoolers have given me plenty of material to work from! I can’t wait to sit down on the sofa and show them the world they’ve inspired.” 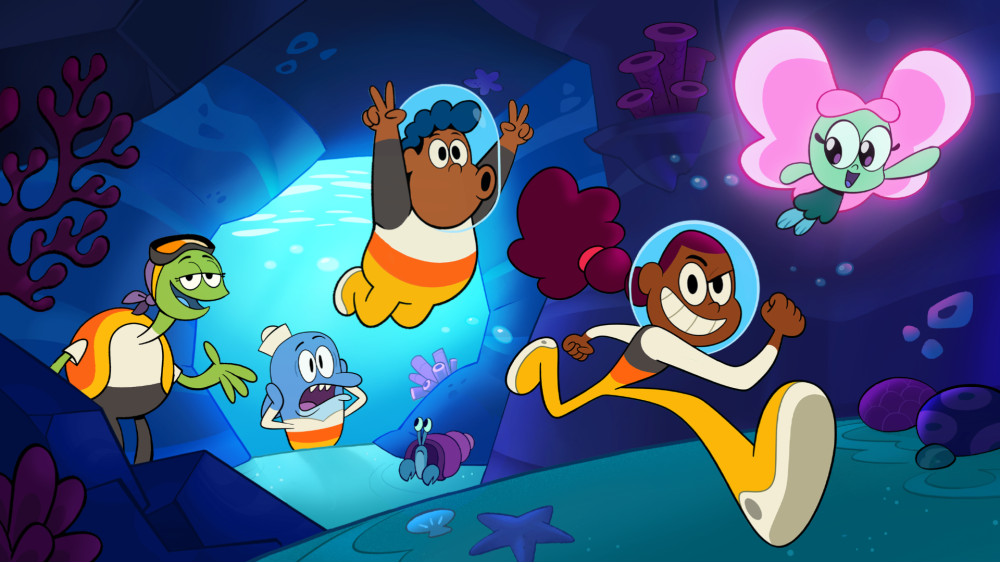 They All Live in a Blue Submarine

Canadian animation powerhouse Guru Studio will be introducing a wonderful new animated show called Big Blue at the fall market. The 2D, 52 x 11-minute series, which is set to premiere on CBC Kids in Canada later this year, was created by Animation Magazine’s Rising Star Gyimah Gariba. Here is the official synopsis: “Whenever there’s trouble, Captain Lettie and The Calypso Crew are there to help save the Big Blue and protect its quirky residents. On every mission, there’s always big adventure, plenty of laughs and even an occasional dance party! This fun-loving crew always sticks together, and with the help of a magical ocean fairy named Bacon Berry, they just might unravel the mysterious secrets of their underwater universe!”

Guru’s president and creative director Frank Falcone tells us, “Big Blue is a show with an incredibly strong creative vision. It’s really funny and delivers on the promise of a diverse modern family dynamic, with all of SpongeBob’s goofy dysfunctional sensibilities, sitting at the helm of an USS Enterprise-like submarine exploring a vast underwater fantasy universe. That’s what we have on-screen: missions, and a lot of comedy!” 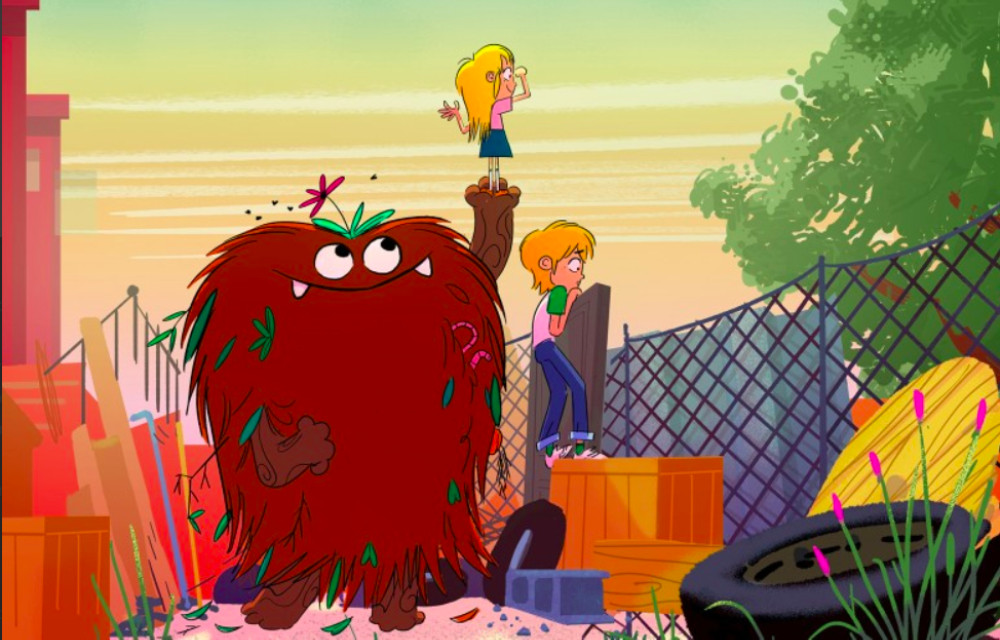 Me and My Compost

If you’re looking for a new children’s show with positive environmental themes, you may have to check out Me and My Compost. (Yes, the name made us laugh, too!). The new 2D-animated show is produced by France’s Superprod and Vivement Lundi! and has a 7.8 million euro (about $9.1 million) budget. The show, which was one of the 50 something projects unveiled at Cartoon Forum last month, centers on siblings Charlie and Zach, whose lives are turned upside down when Compostman, a giant environmentally friendly monster, enters their lives!

As producer Aurélie Angebault explains, “As far as Compostman is concerned, nature is in bad shape, and he knows better than anyone, because he can hear her. That’s why Charlie, Zach and their friends reduce their daily environmental footprint and discover that small adjustments to their daily routines can transform life. It’s also a hilarious and exciting adventure!” The 2D-animated show will be ready by late 2023, so let’s hope the planet survives to see Compostman save us from gas-guzzling cars, greedy multinational corporations and polluting businesses. 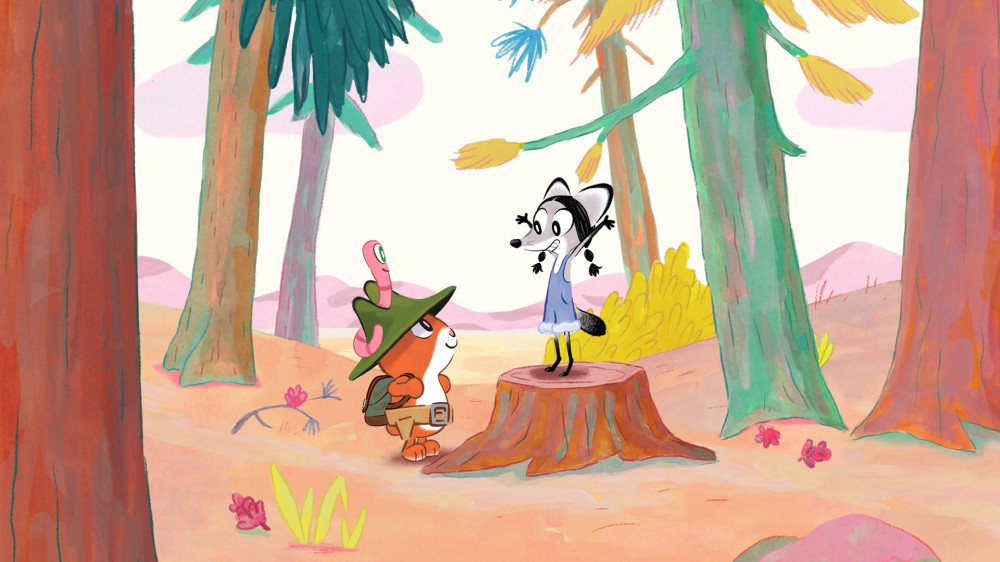 Who can resist a little hamster who dreams of being a cowboy in the wild, wild west? Several European broadcasters who have already signed up for Dandelooo’s charming 2D-animated series Billy the Cowboy Hamster. The preschool show, which was commissioned by France Télévisions, is currently in production at Dandelooo’s animation studio Ooolala in La Cartoucherie, Valance. The 52 x 11-minute show, which is based on a popular book series by Dutch author and illustrator Catharina Valckx and is directed by the talented Swiss illustrator Antoine Rota (Kaeloo) and Caz Murrell. The show follows three friends — Billy, Jean-Claude the worm and Suzie the stone marten — as they embark on thrill-seeking adventures.

Emmanuèle Pétry Sirvin, co-founder of Dandelooo, says, “We love the world created by Catharina Valckx based on sincere kindness and true friendship. We are honored and delighted to say that she loves our adaptation and will include the new characters we created into her future books, too!” And yes, that sound you hear are little hamsters around the world falling off their wheels as they stop to cheer the news! 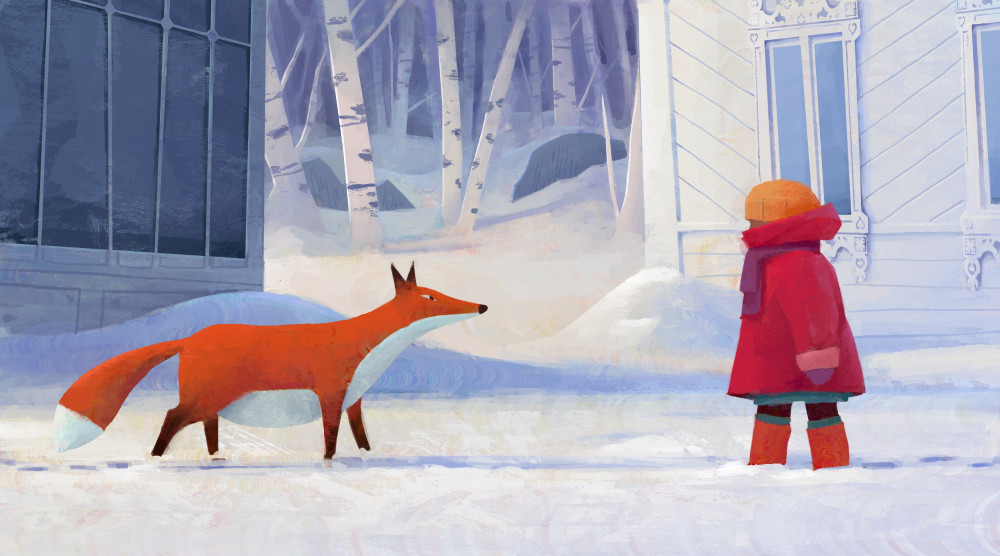 The Winter I Met the Fox

We know good things are coming our way whenever creative French studio TeamTO announces a new show. This year at MIPCOM, the studio behind popular animated fare such as Mighty Mike, Presto! School of Magic and City of Ghosts, is producing three animated holiday specials based on three different children’s books. The first 27-minute project is The Winter I Met the Fox, which details the friendship between a lost fox and a pet chicken. In the 3 x 5-minute project Penguin’s Ice Time, the aquatic bird is irritated by a variety of polar animals. Finally, in the 24-minute special Snowy and the Snowman, audiences meet a young, adventurous snowgirl who saves a rabbit from a mighty yeti in Snowland.

As Mary Bredin, creative development producer at the studio, tells us, “This magical seasonal special is made up of three heart-warming stories, all directed by up-and-coming young directors with great promise in the animation world. They are based on three stunning books that leapt to the screen with ease and will surely become classics that will shine for years to come.” 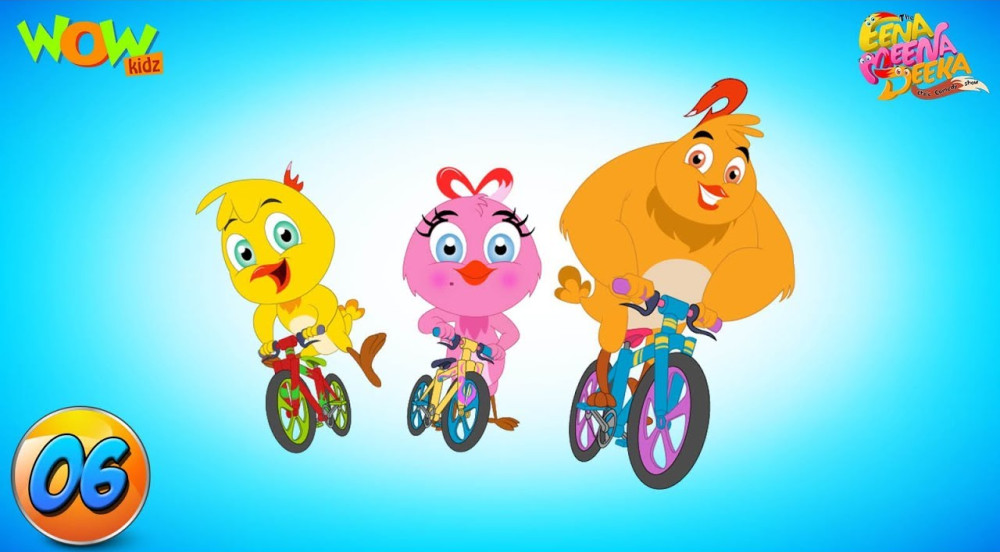 Indian animation house Cosmos-Maya is bringing two major projects to MIPCOM this year. The first is a new dialogue-free project titled The Baloobians. The 57 x 7-minute show, which is described as a sci-fi alien comedy, is penned by Shane Perez (Space Chickens in Space) and directed by Dalton Grant (DuckTales, Tumble Leaf).

Also on tap is the third season of the hit comedy Eena Meena Deeka, which was first introduced in 2015. Co-financed with premium kids and family AVOD network WildBrain Spark, the show will roll out alongside the first season of the show on its official YouTube channel, which is exclusively managed by WildBrain Spark. The slapstick comedy follows the madcap adventures of an always-hungry fox whose plans are constantly foiled by a trio of clever chickens. Who knew that aliens and chickens would become the hot trend of 2021? 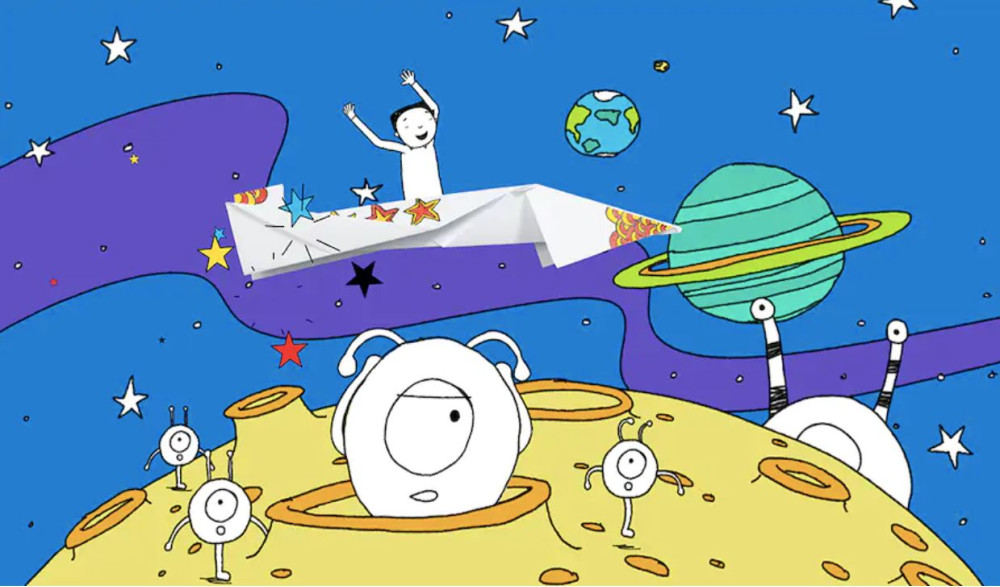 Fans of TG Entertainment’s hilarious mixed media show The Brilliant World of Tom Gates can look forward to a second season of the creative show based on Liz Pichon’s popular books. The  40 x 11-minute series, which is distributed by WildBrain, lends Tom’s humor and school life with crafting ideas for kids, including interactive games, gags and catchy songs. The second season finds our hero embarking on new adventures at home and at school along with best friend Derek, his dog Rooster and  grumpy sister Delia, the ‘fossils’ (a.k.a. Tom’s grandparents) and schoolmate Marcus Meldrew. Audiences also get to meet new characters including Mrs. Nap, the fabulously eccentric music teacher; Linda the singing Llama from FarmerLlama Land; and The Wrinklies, Tom’s mother’s parents!

As Caroline Tyre, VP global sales and rights Strategy at WildBrain, tells us, “From the hugely positive broadcaster response to the remarkable praise from audiences, The Brilliant World of Tom Gates has been really well received across the board. We couldn’t be more thrilled there’s a second season of Tom’s on-screen adventures on their way!” 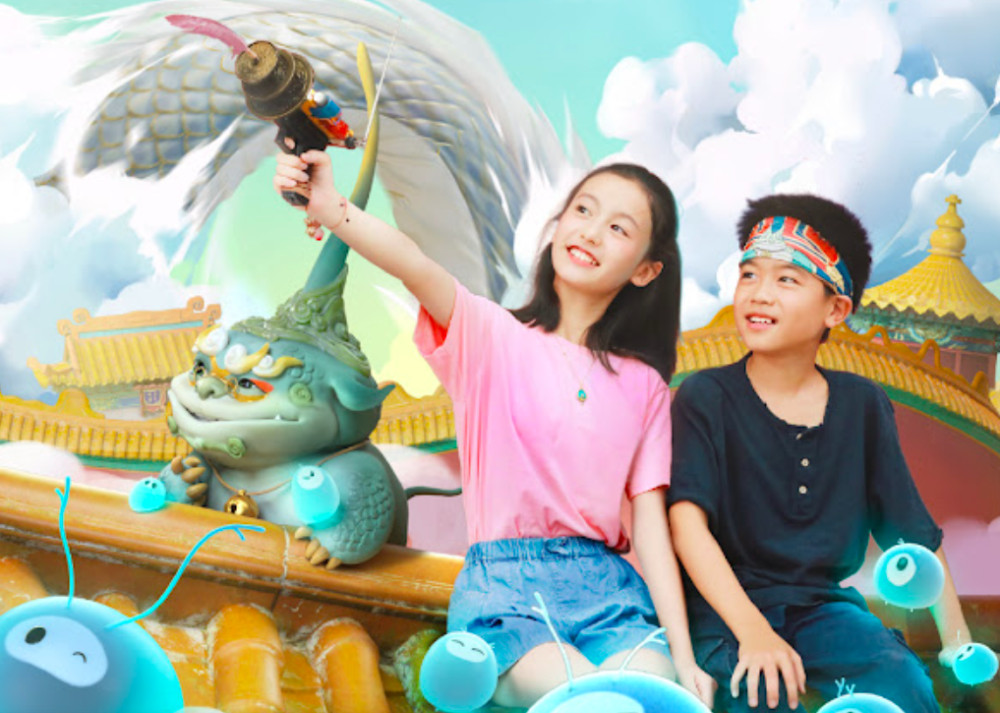 Monsters in the Forbidden City

When an ordinary girl picks up a mysterious gem in the Forbidden City, she accidentally opens a portal and wanders into a parallel realm where monsters, gods and spirits peacefully live together. That’s the fun premise of Monsters in the Forbidden City,  the 78 x 10-minute new series created by Tencent Video, Original Force and Kidsland. Based on a multi-million selling fantasy novel, this funny, action-packed show incorporates traditional Chinese culture in an exciting and modern way, making it accessible for an international audience. 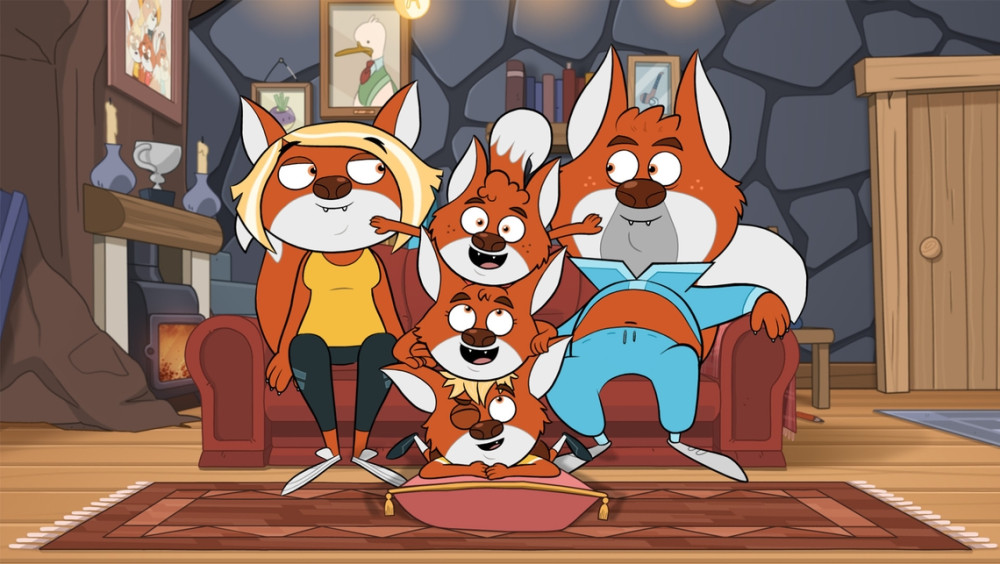 Jetpack Distribution has acquired worldwide rights to cartoon spoof animal documentary Critters TV, from Dublin-based Turnip & Duck. The 26 x 11-minute, 2D Flash/live-action hybrid series for kids four to eight was funded by Screen Ireland, RTÉjr and the Broadcasting Authority of Ireland with the support of incentives for the Irish Film Industry provided by the Government of Ireland. The sketch-style series gives audiences an animal’s-eye view on nature docs as different animal families gather round the TV, offering humorous observations and amazing facts about the natural world. The show features six animal families — the foxes, badgers, squirrels, ticks, hedgehogs and owls. Each day, as they tune into their favorite live-action TV shows (Critters TV), audiences get to watch them in their natural habitats, learning real facts about animals in the real world, while being entertained by the animated critters! We’d rather watch these animal stars than live-action reality show bores any day! 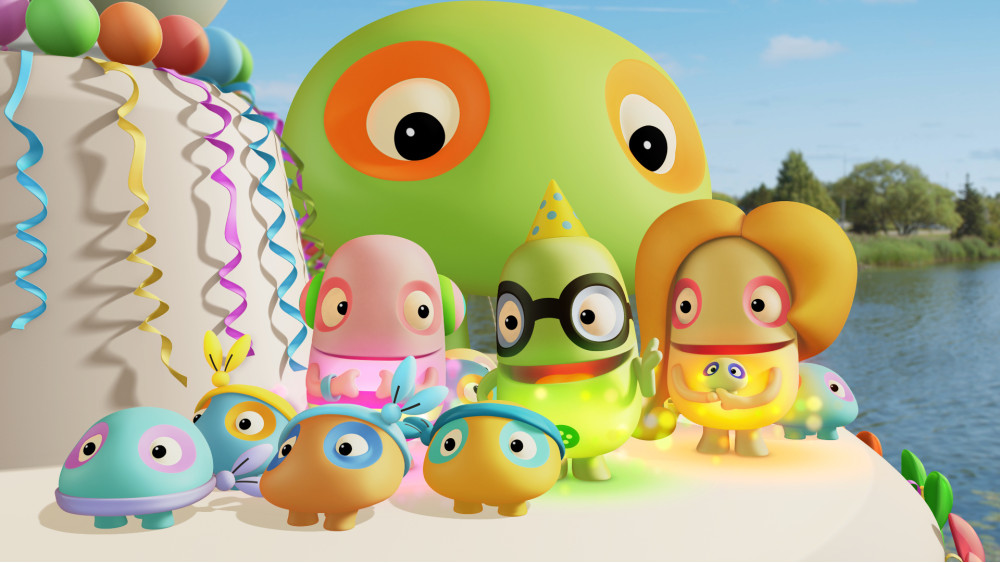 Gallus Entertainment’s charming animated preschool series Glowbies follows the adventures of four shiny friends — Jelly, Randy, Alby and Poppy — as they think happy thoughts and generate a special glow to keep their lighthouse and seaside town of Brighthouse Bay Sage bright! Created by animation veteran Donnie Anderson (Luna Petunia, Guess with Jess) and developed and acquired by CBG Gem and distributed by CBC & Radio-Canada Distribution worldwide, three seasons of the 12.5-minute show are available for audiences worldwide. A special shout-out to the folks who wrote and performed the catchy Glowbies theme song: You won’t be able to get it out of your head no matter how hard you try!