The 15th edition of the well-attended FMX Festival in Stuttgart, Germany was a clear indication of how much the visual effects, animation and interactive media has evolved since 1994 when the first ‘Film and Media Exchange’ event was presented. As noted by Prof. Thomas Haegele, founder and head of the event, ‘Many of the young talents that presented their work back in 1994 at the first Film & Media Exchange have since become major players in the entertainment business. To name but one, Academy Award winner Volker Engel, who comes back to FMX this year to present his work as co-producer and vfx supervisor for Roland Emmerich’s 2012.” 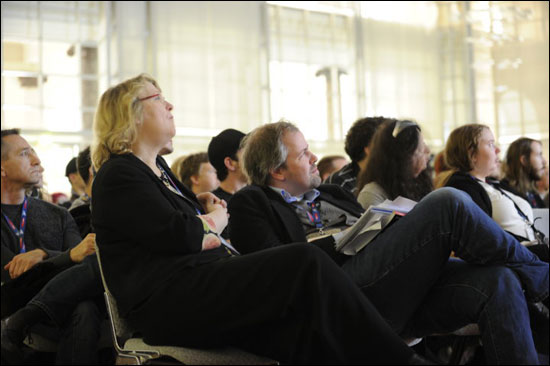 This year’s edition really proved once again the extraordinary position of this four-day-event (May 3-6) in the modern world of digital entertainment. Flawlessly organized with over 3,000 visitors per day from 41 countries all over the world, located in the south of Germany, in Stuttgart’s beautiful old House of Commerce, FMX presented a thorough insight into the achievements, problems and ongoing changes in the industry. About 60% of the audience were professionals, 40% students–and the original idea of the founder of FMX still stays strong, which was to create a meeting point between the business and the academic world.

Don Marinelli, from ETCglobal at Carnegie Mellon, Pittsburgh joined the 5D Conference panels about Immersive Design at FMX and he explained his experience at Stuttgart this way: ‘The thing that I enjoy the most about FMX are the students. I really believe that while it’s nice that the industry is able to come together, if we are not doing this for the next generation of creators, then really, what’s the point? Then we would just have dinner and drinks, some kind of networking smooch fest, but students come here and they are the future, that’s what I found the most enjoyable and exciting about FMX.’ 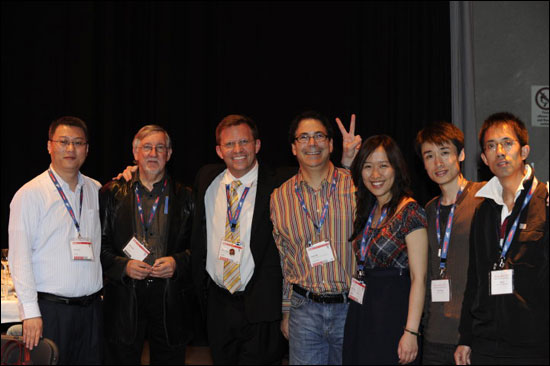 The discussions between professionals and students culminated at the Fightclub session at the end of the 5D panel, where an open-minded audience spoke freely with all panelists, among them Marinelli, Dave Gibbons, Kevin Tod Haug and many others. VFX legend and superstar Ken Ralston is a big fan of the multi-faceted FMX: ‘For me one of the coolest things about FMX has been is that as big as it is, it still feels like a tightly knit sort of a family,’ he noted. ‘Maybe it’s because so many of the people here are students and people who are interested in what the work is, it doesn’t feel like some of the larger corporate things many of us have done back in the States. I feel a real and honest interest and excitement about what everyone who has been here this week has been trying to teach or to tell about. We all know everybody here is anxious to learn about the biz and it’s been kind of fun that way, kind of neat to do that.’ 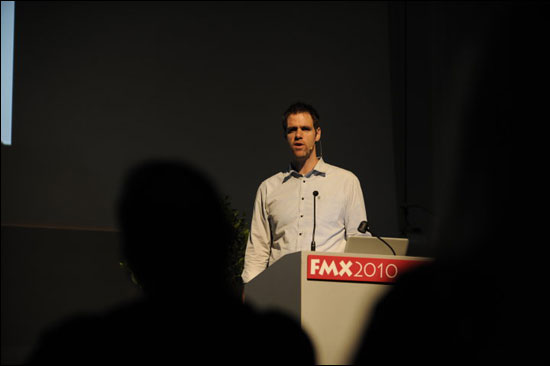 Ralston and Dave Schaub did a fantastic job of providing insight into the unbelievable amount of vfx work done on Alice in Wonderland. Asked about his best moments at FMX, Schaub added: ‘Ken pretty much said everything ‘ I think the enthusiasm of the crowds is just the best! Here it is a great turnout with the audience, they are just eager to hear basically everything.’

Sven Bergman, former student at Stuttgart and now independent producer at Berlin was glad to have come to FMX: ‘I did some intensive studies by visiting all the 3-D filmmaking panels and what I experienced makes me very happy actually, even the experts don’t really know, how good and cool stereo 3-D looks. And this leaves a huge space for creative powers from amateurs to students to professionals’so stereoscopic filmmaking at the moment is not only technology driven, it is still very creatively driven and therefor from the amateur to the super-professional, there are a lot of positive surprises possible.’ 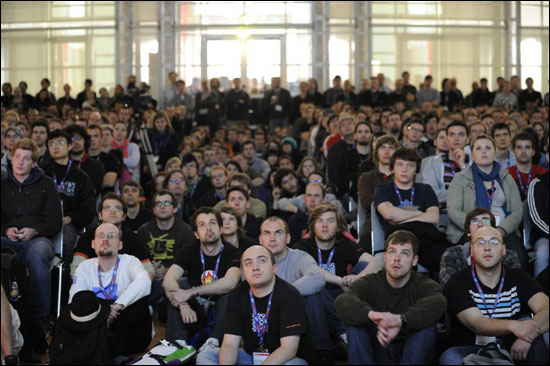 USC’s computer graphics visionary and SIGGRAPH veteran Paul Debevec told us that his favorite aspect of the conference this year was introducing his friends from the research community to the FMX experience. ‘Jean-Michel Blottiere asked me to curate a special session of SIGGRAPH papers and so I got to invite Ramesh Raskar, Ken Perlin, J.F. Lalonde, Christian Theobald, Adam Finkelstein from all around the world to present their SIGGRAPH papers here. It turned out to be a beautiful session. Many of them had never been to the FMX before and many of them are going to make an appointment to get back here in the future.’

Even the speakers went to some classes and presentations to learn for themselves. For example, Ben Grossman, who offered an informative session on the vfx work of Martin Scorsese’s Shutter Island and also contributed to Alice in Wonderland, pointed out that ‘the best part of FMX I experienced was Corey Turner’s presentation on stereoscopic filmmaking and its workflow. That was truly learning about the future of film-making and how we have to face tomorrow today!’

To find out more about this event, visit www.fmx.de.