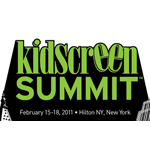 It’s a busy week for TV development execs, buyers and producers at they gather for the annual Kidscreen Summit held at New York City’s Hilton (Feb. 15-19). The confab features packed panels on the state of the TV business, interactive content, one-on-one sessions with buyers and programming execs from around the world, pitch clinics, and in-depth spotlights with the programming team at small-screen powerhouses such as Nickelodeon, Cartoon Network, Corus and TV France. Also on the line-up today is author and journalist Steve Berlin Johnson (Where Good Ideas Come From), who delivers an intriguing keynote speech today on the history of innovation through the ages.

One of Wednesday’s big draws was the spotlight on Nickelodeon, where Jules Borkent (SVP of global acquisitions and international programming), Bronwen O’Keefe (VP of original programming), Roland Poindexter (SVP of original programming, animation) and Teri Weiss (SVP of production) discussed the cabler’s brand and the unifying themes of its global programming. Moderated by mega-creator Thomas Lynch, the panel focused on how the execs plan and acquire programs that resonate with the creative vision of the network around the world and how they look at humor as a way of reaching audiences beyond border and culture barriers.

The Cartoon Network team emphasized that it will continue to focus on boys action and comedy content. “Our brand embraces distinctive creative voices such as Penn Ward, who came to us straight from CalArts and created our very successful show Adventure Time, as well as our upcoming TV series based on How to Train Your Dragon, which is a spin-off of the DreamWorks movie,” noted Swartz. He also added that the primetime weeknight blocks  (Monday night comedy featuring Adventure Time, Regular Show, MAD, Wednesday night alternative programs, and Friday day action line-up of Clone Wars, Ben 10) have proved to be very successful for the network.

The CN team noted that animated programs still make up 90 to 95 percent of the cabler’s content.  “We consider ourselves the home for animation in the future,” said Swartz. “We have 16 to 18 animated shows in production right now, so you can see that animation is an important initiative for us.”

Pitt said that while the CN’s programming is defined as boy targeted and girl inclusive, they won’t say no to a character like Buffy the Vampire Slayer who is going to “kick butt.” She also pointed out that as a direct result of the audience attention span and web programming, they are seeing a lot of more shorter format projects. “Don’t be shy if you have a short that you think might be a good fit for us,” Pitt suggested. “The ideal form for comedies is still 11-minutes, but we’re seeing a lot of shorter variations.”  Persson and Pitt both said that they’ll be interested in looking at more original animated features made for TV. Pitt added that Halloween specials are also enjoying a resurgence.

One final message that the panel had for the audience was to embrace their own creative vision. “Don’t try to imitate a hugely successful brand like Star Wars, be your own Star Wars,” said Pitt. “Also keep in mind that we really stress the wish fulfillment aspect of our programs. What’s really important for our target audience of six to 11 is to be able to relate to the main character, like Ben 10. It’s all about ‘I want to be that kid.’ “

For a complete list of panels and speakers, visit summit.kidscreen.com.