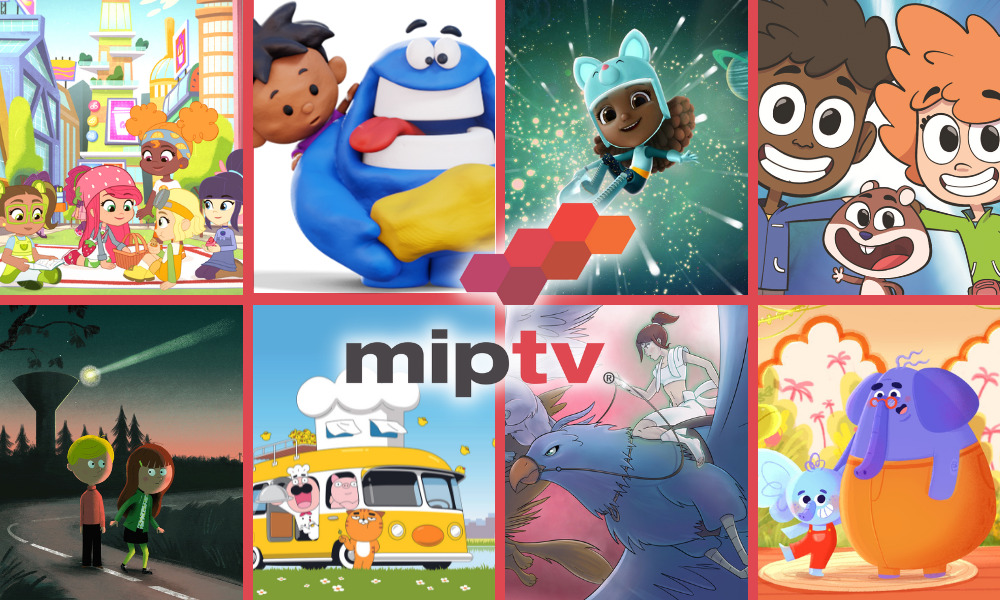 While not everyone is going to the MIPTV market in France this spring (April 4-6, miptv.com), lots of hot new animated shows will be seeking buyers and distributors at the Cannes-based event. Here are some of the toons that caught our attention: 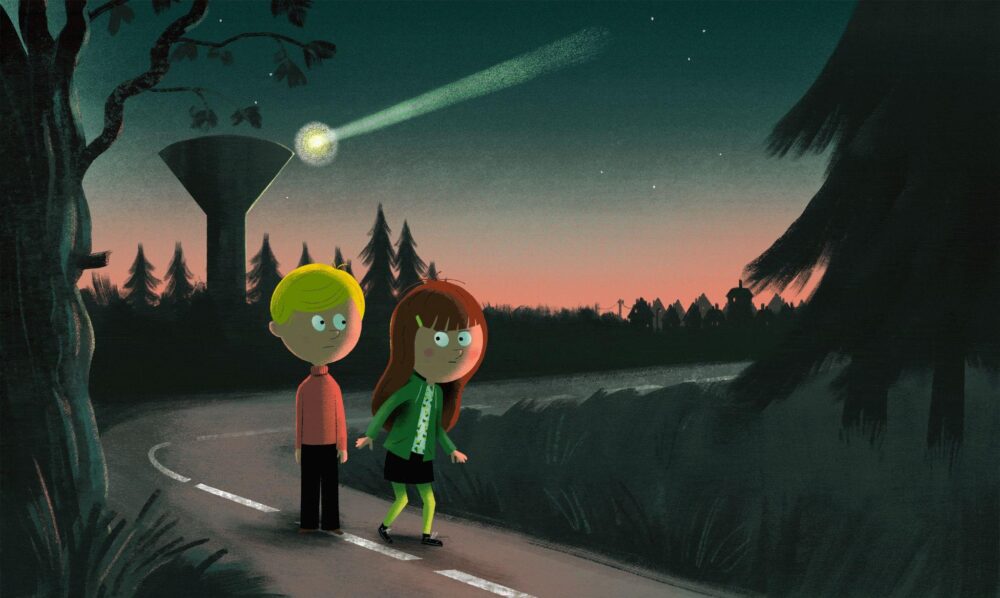 Margot and the Space Robots

Margot and the Space Robots

Synopsis: When Margot sees a laser beam from outer space land on the water tower in the middle of the night, she tells herself that she has been dreaming. But two cruel aliens have landed and want to enslave the population of Aquaville! However, after Margot meets Gabriel, a robot with the appearance of a human boy, they become friends and decide to sabotage the aliens’ plan — because nothing is impossible when artificial and human forces come together!
Stand-Out Qualities: Original design, a new take on friendship, a comedy about a parent becoming a robot and the attraction of the new digital world. In an increasingly digital world, screens are taking over all activities. In this film Margot’s parents are getting far too absorbed in the digital world and this helps her realize the importance of “real” friendship.
Exec Quote: Emmanuèle Pétry Sirvin, Partner at Dandelooo, tells us, “We are honored that the very talented producer Everybody on Deck has chosen Dandelooo as the worldwide distributor for this outstanding original special, which will be on air on France TV for Christmas. It’s a character-driven animated comedy, offering great entertainment that expresses positive and important messages such as friendship, being different, understanding feelings and the significant pull and appeal of our new digital world.” 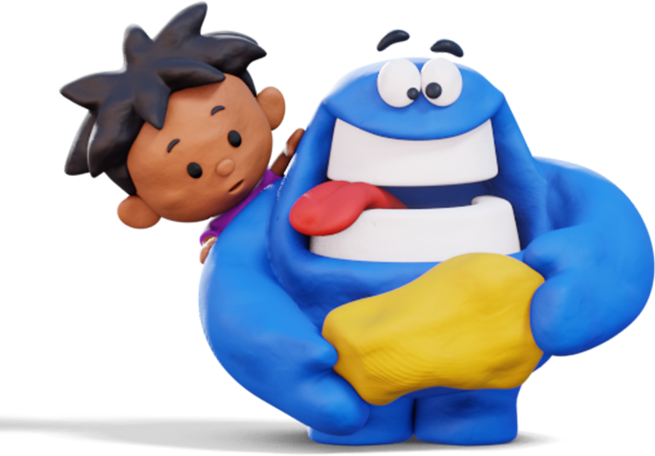 Synopsis: Kamal and his magical friend Mr. Clayfield go out on adventures in and around the town of Molding. Sometimes they are accompanied by Kamal’s friends Isa, an ambitious prankster, and Ollie, a goofy but loveable farmer’s son. In a world where nearly everything is made out of clay, Mr Clayfield is able to change his own shape, as well the shape of things around him and Kamal likes to use his imagination and take full advantage of his friend’s unique ability.
Stand-Out Qualities: This preschool buddy show is endearing, playful, combative, thoughtful and fantastical; the characters act and sound like real best friends.
Exec Quote: Harry Teper, managing director of Omens Studios London, notes, “Mr. Clayfield is a fun filled story of friendship and imagination. The adventures that Kamal and Mr. Clayfield go on are energetic and vivid and tell important stories on looking out for your friends and family dynamics with a lot of laughter thrown in. We are very much looking forward to introducing the world of Molding to buyers at the market.” 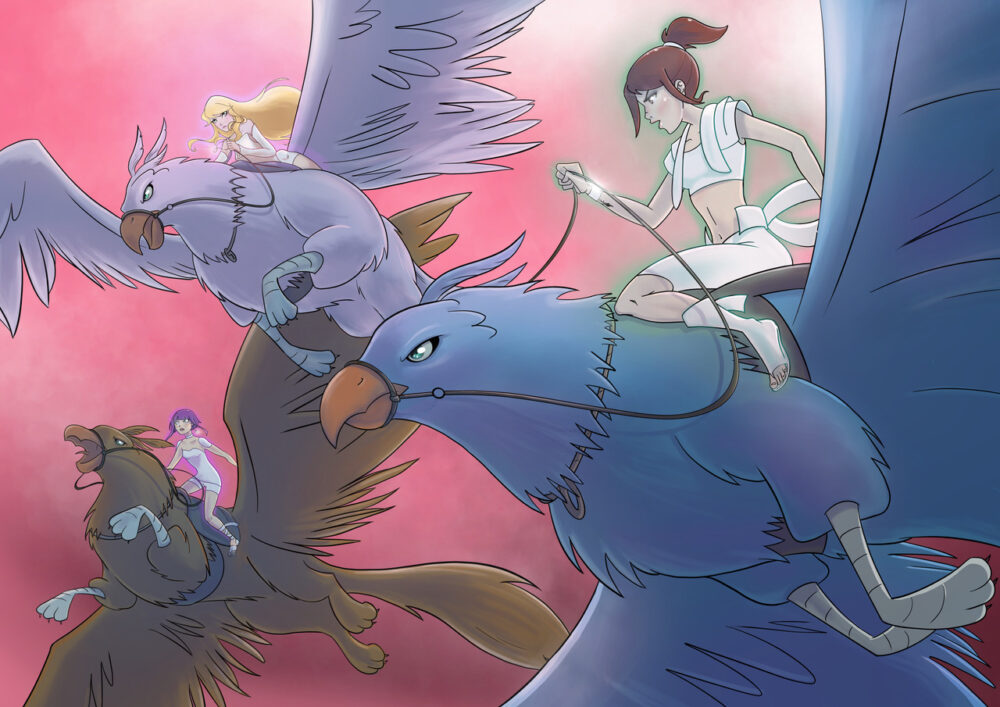 Synopsis: Three high school girls discover their true identities as reincarnations of the goddesses Athena, Aphrodite and Artemis. Embracing their new supernatural talents, they move between reality and fantasy worlds, fighting mythological creatures and slamming their school grades. Evading adult suspicions, they go after Ares, the God of War.
Stand-Out Qualities: An epic serial with strong storytelling focusing on the power of strong friendships and self-development. The show was recently acquired by UK children’s channel CBBC, which plans to air it this summer.
Exec Quote: Genevieve Dexter, Founder and CEO of Serious Kids, says, “This is an epic fantasy adventure which is going gangbusters on RAI Gulp in its first two weeks ! We’re going to let this loose on the world.” 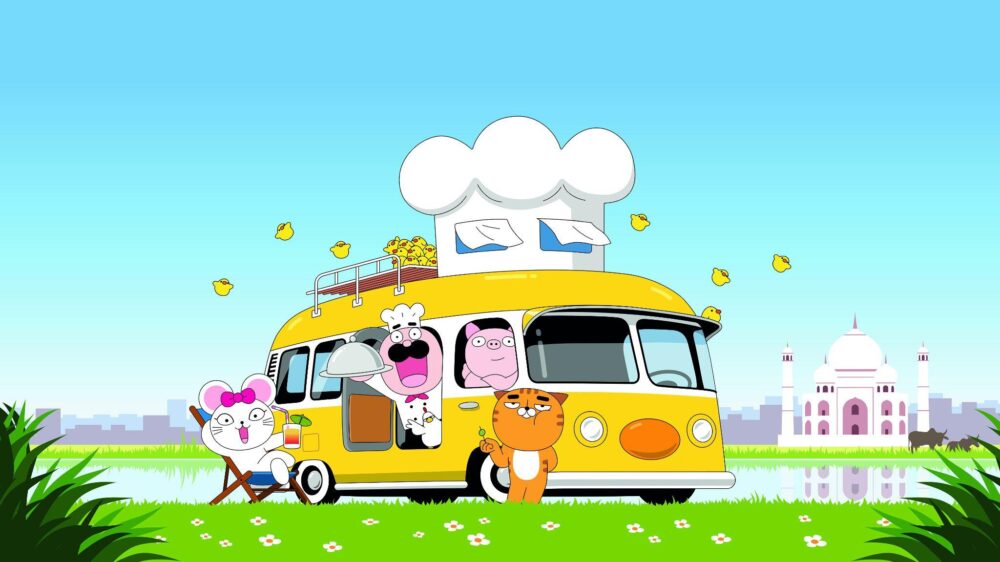 Synopsis: This action-comedy edutainment series follows the adventures of intrepid kitchen enthusiasts Maurice, Lola, Carlton, Colette, Elvis and the Kikitos as they set out to discover the world. Their roadmap: A passion for cooking and a curiosity as big as their appetite! Together they discover the world through their eyes and their taste buds. In their quest for new ingredients, flavors and traditional recipes, the Chefclub friends team up with cooks — and new friends – across the globe.
Stand-Out Qualities: Chefclub Friends is inspired by the hugely popular Chefclub Kids digital channel with tens of millions followers all over the world. Like the channel, this series will show kids that cooking is one of the healthiest, most sociable and fun ways to play!
Exec Quote: Marie-Laure Marchand, SVP of global consumer products & business development, explains, “The Chefclub Kids channel was created to inspire children to cook, become independent and enjoy themselves with their family in the kitchen. Now, with Chefclub Friends, our young viewers can take their culinary adventures all over the world, following their favorite characters to discover new recipes and cultures!” 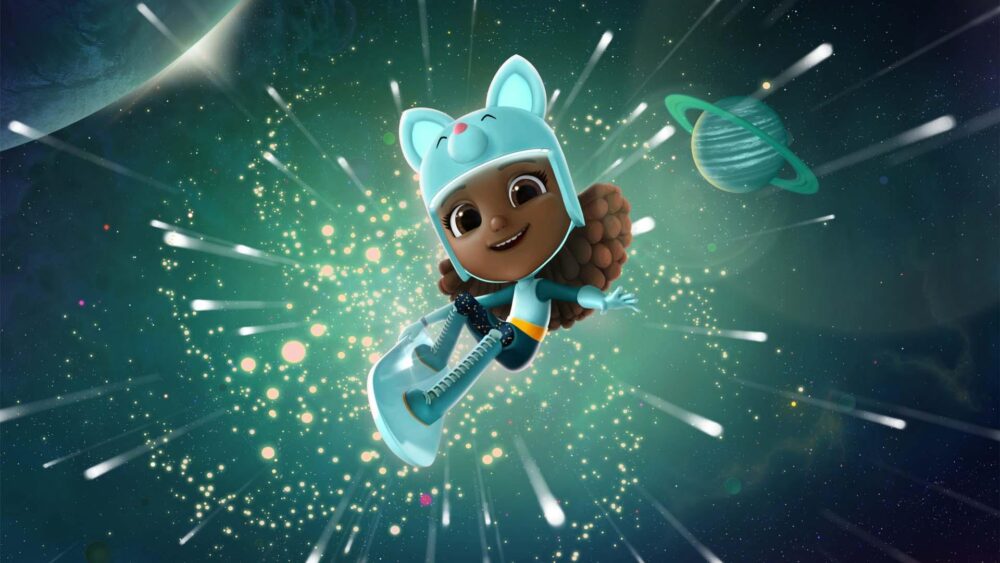 Synopsis: In the year 3021, on a faraway space station, Ella and her friends set out on interstellar adventures and discover the wonders of the universe.
Stand-Out Qualities: Each episode is filled with adventure and comedy moments, with a strong cast of characters and a relatable female lead.
Exec Quote: Aardman’s director of distribution Alison Taylor says, “With so many fantastic partners already on board, we are very excited to be taking Interstellar Ella to MIPTV with the first episode in our pocket, and cannot wait to see the reaction of our potential buyers when they see this much-anticipated first episode.” 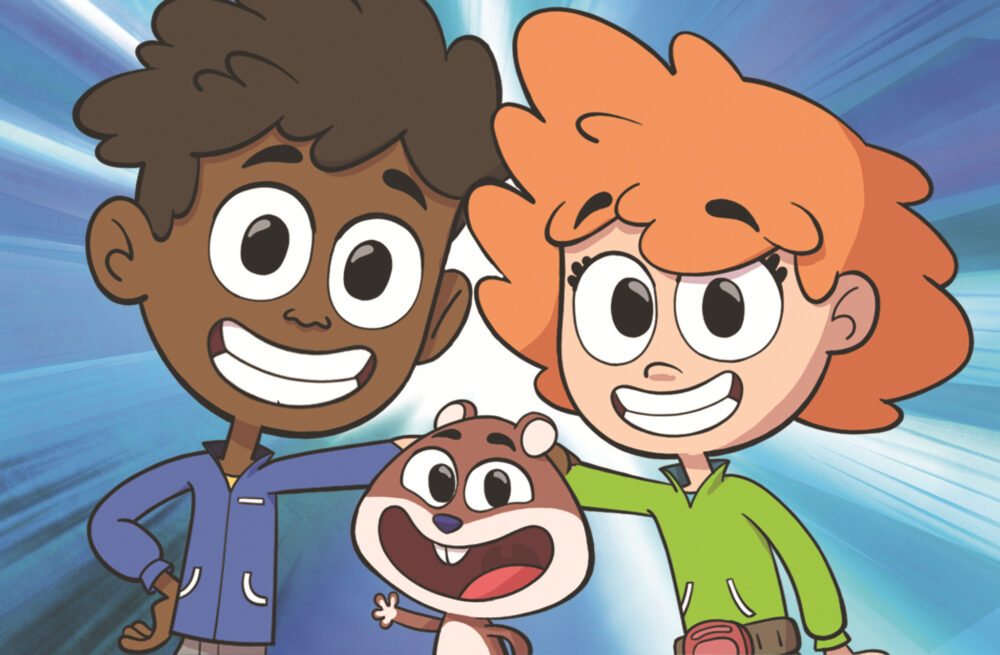 Synopsis: The series follows the adventures of best friends and neighbors Zoe and Milo who travel the world in a plane built and piloted by Alim the hamster, who also knows everything about the world’s cultures and customs.
Stand-Out Qualities: Each episode focuses on another thrilling adventure and enriching discovery for the duo, inviting children to learn about cultural differences from all over the world.
Exec Quote: According to Lionel Marty, managing director of APC Kids, “Zoe & Milo is not only a fun-filled series of friendship and adventure, but introduces kids to new countries and cultures they may not have experienced before, exploring important topics of diversity and inclusivity. We are very much looking forward to bringing season one to buyers at the market, along with season two currently in production.” 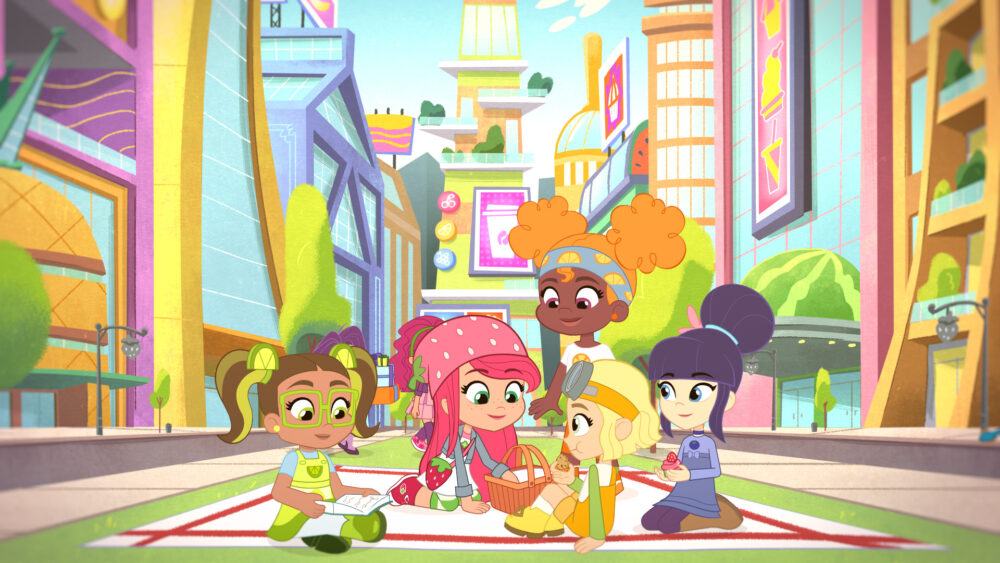 Synopsis: Strawberry Shortcake travels to Big Apple City, where all the biggest names in baking go to get their break, along with her cute cat, Custard. She teams up with her new “berry besties” — Orange Blossom, Lime Chiffon, Lemon Meringue and Blueberry Muffin — as well as their lovable pets. Together, the entrepreneurial girls run their fabulous food trucks and enjoy daily adventures filled with laughter and singing as they strive to “bake the world a better place”.
Stand-Out Qualities: Berry in the Big City is produced by WildBrain’s Vancouver animation studio with renowned showrunner Michael Vogel, one of the creative forces behind the success of My Little Pony: Friendship Is Magic and My Little Pony: The Movie. The series is available in English, French, German, Portuguese and Spanish and is supported by an extensive marketing and consumer products campaign, including the first-ever Strawberry Shortcake Roblox game as well as upcoming toys, books and fan experiences. With the four premium CG-animated specials (available in 31 languages), kids and families can gather around to enjoy exciting seasonal stories about Strawberry Shortcake and her pals.
Exec Quote: Caroline Tyre, Wildbrain’s VP of global sales and rights strategy, points out, “Strawberry Shortcake has been loved by generations of girls, and now she’s back with a cool new look and confident, savvy ‘can do’ attitude for today’s kids. Through Strawberry’s entrepreneurial spirit and her diverse friendship group — our aim is to empower all kids to pursue their dreams. Building on the fantastic audience response to the show’s first season on Strawberry Shortcake’s YouTube channel and the brand’s global appeal, we see significant international broadcast potential for the series and premium specials in all markets.”

Synopsis: Erin, an energetic four-year-old elephant, loves to visit her Grandpa at Ivory Towers in this joyous new comedy series which celebrates the special bond between the youngest and the oldest. Grandpa loves telling stories of his escapades, though his memories are starting to fade. But there are always new ones to be made, and as Erin breathes life into the residents they embark on all sorts of madness and mayhem, determined to take each day as it comes, live in the moment and make every day as fun and uplifting as possible.
Stand-Out Qualities: Joyous and uplifting in all aspects, from its gorgeous colors and exuberant New Orleans brass band score to its fun and engaging characters and riotously comic stories, Ivory Towers encourages children to live in the moment, have gratitude for people in our lives and celebrate the joy in every day.
Exec Quote: Colin Williams, Creative Director at Sixteen South, tells us, “With global themes, important messages, comically entertaining characters and stories plus a huge feelgood factor, Ivory Towers has enormous worldwide potential. A sense of community is key to all of our shows because characters really thrive when they’re together. We also want to show how young kids and old folks have a lot in common and are really good for each other. Although our elderly residents are in the sunset of their lives, they are still big kids at heart, wanting to make the most of every moment and enjoy life to the full — just like preschoolers. Based on a positive psychology that teaches gratitude — and how being grateful is an action not just a feeling — the show also demonstrates how to make your own fun, be creative and imaginative, and find joy in every situation.”