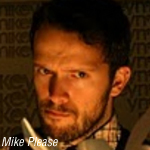 Mike Please’s The Eagleman Stag won the Best Animated Short prize at the 17th Edition of the Los Angeles Film Festival this past weekend.

Voiced by British actor David Cann, the monochrome stop-motion short centers on a man’s obsession with his quickening perception of time and the extreme lengths he goes to in order to counter the effect. The origami-inspired project also received the Wholpin Award at the SXSW festival, the BAFTA for Best Animated Short and Annecy’s Special Distinction prize earlier this year.

Based in London, Please is a graduate of the Royal College of Art and University of the Arts (Wimbledon College). He has also directed acclaimed music videos for M Ward, Ingrid Michaelson and Jeffrey Lewis and TV on the Radio. You can find out all about this innovative animator’s work at mikeyplease.co.uk.

Here’s a trailer and a time-lapse sequence for the prize-winning short:

The Eagleman Stag – Trailer from Mikey Please on Vimeo.

The Eagleman Stag – lake timelapse from Mikey Please on Vimeo.

In other festival news, Kamil Plak’s The Lost Town of Switez (Poland, Canada) received the First Place prize ($2,000) for Best Animated Project at the Palm Springs International ShortFest. Based on the 19th century heroic poem by Adam Mickiewicz, Polak’s CG-animated work centers on a traveler whose journey is diverted when his carriage driver falls asleep. Nick Fox-Gieg’s Interregnum took home the second prize, while The Cord-Woman (La Femme a Cordes) was the winner in the Best Sound Design category.