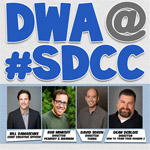 The folks at DreamWorks Animation put on a terrific show on the first day of Comic-Con on Thursday (July 18). Studio chief creative officer Bill Damaschke, directors David Soren (Turbo), Rob Minkoff (Mr. Peabody and Sherman) and Dean DeBlois (How to Train Your Dragon 1 and 2) shared scenes from their movies and offered insights into their creative process during a lively and entertaining panel. It was also announced announced that Cate Blanchett, Djimon Hounsou and Kit Harington (Game of Thrones) have joined voice cast of How to Train Your Dragon 2, which is slated for a March 2014 release.

According to DeBlois, the Oscar-winning Blanchett will voice a character named Volca, “a feral, recluse vigilante that’s been out there rescuing dragons from traps.”

Hounsou will voice the villainous Drago Bloodfist, while Karington, who made a surprising guest visit to the panel, will play the very cocky, self-declared greatest dragon trapper who works for Bloodfist.

The Comic-Con audience went wild for the Dragon clips DreamWorks brought to the panel. The first was a longer sequence from the teaser clip that went online and other featured Hiccup (Jay Baruchel) and his pet dragon meeting an ominous, mysterious dragon rider in mid-air, with spells trouble for the lead characters.

DeBlois talked about the importance of treating the Dragons series as a large epic trilogy.

“When Jeffrey Katzenberg asked me whether I was interested in doing the sequel, I said yes, only if you’re interested in a trilogy. Because then we can tell the middle of the story and we can treat the first story as the first act and head into the second, and then things must conclude in the third. We get to start when the first movie left off, which is now Vikings can fly on the backs of dragons and the entire world is open to them for exploration. Hiccup can now push beyond the known world and expand the map in every direction, and inevitably he has to come to some sort of conflict out there where dragons and humans are at war. We get to the idea that an encroaching threat will find its way to Berk.”

Mentioning his youth and how much he enjoyed playing with his action figures and escaping through movies such as Clash of the Titans, Star Wars and The Empire Strikes Back, DeBlois said those films really inspired his fertile imagination.

“The Empire Strikes Back is a great example of a movie that was able to take something that we love and expand it in every direction, the scope got bigger the characters got richer, this idea of a new worlds new gadgets new costume, new foes.. Every thing about that movie was such an inspiration to me… In a world where a lot of sequels are pretty disappointing, it’s our intent to overdeliver.”

Music fans may also be happy to know that Sigur Rós’ Jón Þór Birgisson will contribute three new compositions to the soundtrack of How To Train Your Dragon 2, and will also collaborate with composer John Powell on the project.

Soren also discussed the origins for his movie, which began 10 years ago as the winner of a pitch contest at DreamWorks. He talked about how his team didn’t have to go far from the studio’s Glendale home to do research on the movie, which takes place in Van Nuys. He also joked that he had to rely a lot on his imagination because he couldn’t stick too closely to scientific facts after realizing that snails are actually hermaphrodites.

Before the How to Train Your Dragons portion of the panel, Minkoff discussed the huge influence Jay Ward’s original cartoons had played on his work, praising the Rocky and Bullwinkle shows and the guidance of Tiffany Ward, Jay’s daughter, who was present in the room. He also mentioned that as a first-time father of a 10-month-old son, the strong bond between Mr. Peabody and Sherman (“the first interspecies father-son story”) really resonated with him. The audience was then treated to a high-energy sequence from the upcoming movie, which featured the genius talking dog and his adopted son Peabody being chased by Robespierre and an angry mob in revolution-era Paris. That’s what happens when you mess around with the famous Way-Back Time Machine, after all.

Here’s a look at the How to Train Your Dragon 2 teaser: 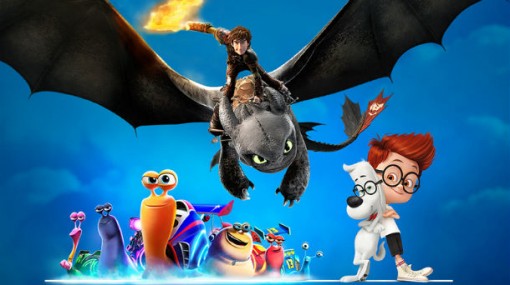 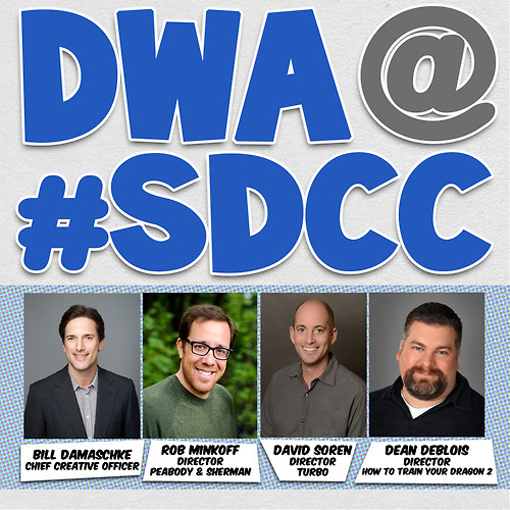