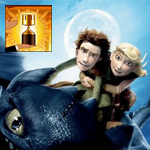 DreamWorks’ Dragon has delivered another triumphant sweep. Chris Sanders and Don DeBlois’s How To Train Your Dragon won 15 out of 24 award categories, including Best Animated Feature, at the 38h Annual Annie Awards last night (Feb.5) at UCLA’s Royce Hall. Teddy Newton’s Day & Night was the winner in the Best Animated Short category.

Although Disney and Pixar had officially pulled out of the competition and withdrew their support (in protest to the awards’ voting process), Day & Night won in the shorts’ category and Toy Story 3 and Tangled were in the running in various other races. Best Animated Television Commercial to Duck Studios Children’s Medical Center’; Nickelodeon’s SpongeBob SquarePants was honored as Best Animated Television Production for Children (another surprise, as most insiders had their money on Cartoon Network’s Adventure Time) and Playdead’s Limbo won Best Animated Video Game.  The new Annie for Character Animation in a Live Action Production was presented to Tim Burton’s Alice in Wonderland.’

The Winsor McCay award was presented to Brad Bird, Eric Goldberg and Matt Groening. Bird accepted the award through a previously taped segment from Vancouver, where he’s directing the upcoming Mission Impossible 4 feature. The film’s stars Tom Cruise and Simon Pegg also contributed to the hilarious segment. Goldberg and Groening spoke of the love for animation and the joys of working in the medium. Groening pointed out that he has only worked on two animated shows throughout his career—The Simpsons and Futurama—but that receiving this award has inspired him to develop a new project.

A complete list of the 38th Annual Annie Award winners are at  www.annieawards.org.  The Annie Awards ceremony will be web cast on the Annies website later this month.

Continue Reading
You may also like...
Related Topics:Annie Awards, How to Train Your Dragon, live events