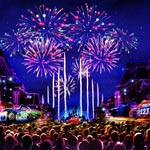 Disney Parks is planning its biggest-ever celebration of all things Pixar, with Anaheim, California’s Disneyland Resort set to hold the debut Pixar Fest next year. The limited time event will kick off on April 13.

During the event, the beloved stories and characters of Pixar Animation Studios films such as Toy Story, Monsters, Inc., Finding Nemo and Up will come to life in new ways at both Disneyland and Disney California Adventure — including a sparkling new fireworks show, updated parades, decorations, atmosphere entertainment, themed food and exclusive merchandise.

“Together Forever – A Pixar Nighttime Spectacular” will light up the sky with a themed fireworks show blending pyrotechnics and memorable music, celebrating the theme of friendship in Pixar animation. Visitors can experience the story throughout the park with projections on iconic locations: Sleeping Beauty’s Castle, the water screens at Rivers of America, “it’s a small world” and Main Street, U.S.A. The traditional Tinker Bell fly-over will also get a Pixar twist, with Buzz Lightyear buzzing by the Castle.

The “Pixar Play Parade” will wend through the Disneyland parks for the first time, beginning as all Pixar films do: with an appearance by Luxo Jr. Character from Up and Inside Out are also joining in. After dark, the “Paint the Night” parade will return to California Adventure, lighting up Toy Story, Monsters, Inc. and Cars characters with 1.5 million LED lights.

Other highlights of the California Adventure side of Pixar Fest include a rotating collection of studio shorts featured at the Sunset Showcase Theater (including For the Birds and LAVA), and a musical troupe playing Pixar-inspired tunes in Paradise Gardens.

At Disneyland:
+ Buzz Lightyear Astro Blasters: In this interactive attraction, guests fire lasers to help battle Evil Emperor Zurg, who is trying to steal the batteries from helpless toys.
+ Finding Nemo Submarine Voyage: Guests take a submarine voyage to explore the world of Nemo and his underwater friends. “it’s a small world”: Woody, Jessie and Bullseye from Toy Story are among the many toys and dolls found in this classic attraction.
+ Character encounters with Pixar pals: Guests can continue to meet Merida from Brave in Fantasyland and Woody and Jessie from Toy Story in Frontierland.
+ “Fantasmic!”: Favorite Pixar characters appear in the finale of “Fantasmic!” nightly on the Rivers of America.

At Disney California Adventure:
+ Cars Land: Guests step into the world of Radiator Springs with three attractions plus themed shopping and dining locations across 12 acres.
+ Toy Story Mania!: Guests shrink to the size of toys and take aim at objects to score points in 4D midway-inspired carnival games hosted by the characters from the Toy Story films.
+ “a bug’s land”: Shrinking to the size of a bug, guests experience this story through family-friendly attractions.
+ Monsters, Inc. Mike & Sulley to the Rescue!: Guests take a wild taxi ride through Monstropolis with Mike and Sulley as they search for their lost human friend, Boo.
+ Turtle Talk with Crush: Crush, the sea turtle from Finding Nemo, interacts with guests in live, real-time, animated conversations.
+ “World of Color”: Characters from Finding Nemo, WALL-E, Toy Story, Up and A Bug’s Life appear in this nighttime water spectacular which combines animation, music, lights and color with more than 1,200 fountains.
+ DJ’s Dance ‘n Drive: Interactive dance party in Cars Land invites guests to move to the music. 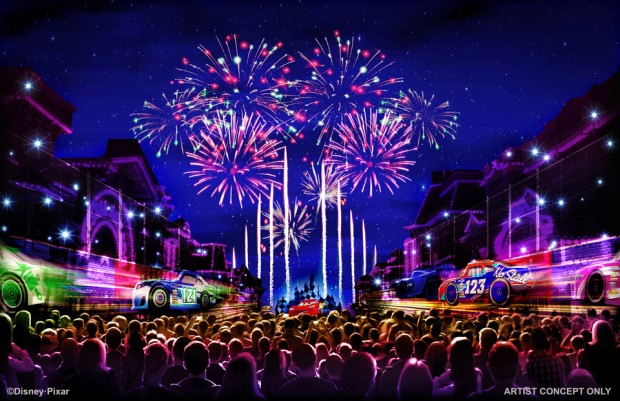 “Together Forever – A Pixar Nighttime Spectacular”