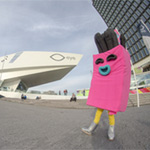 As early bird ticket sales open for the 10th edition of KLIK Amsterdam Animation Festival — taking place October 17-22 at EYE Filmmuseum (www.klik.amsterdam) — the organizers have announced its first international guest will be Daron Nefcy, creator and executive producer of Disney Television Animation’s Star vs. The Forces of Evil.

Nefcy will give a presentation at KLIK giving attendees insight into the process of creating an episode of Star vs. The Forces of Evil, from concept, to storyboards, design, editing, music, sound and animation production. The series follows teenage alien princess Star Butterfly through her adventures on Earth, where she navigates human high school and dimension-hopping missions to keep her magic wand out of the wrong hands.

Star vs. The Forces of Evil received three Annie Award nominations in 2016. Nefcy herself has been named one of Variety’s “10 Animators to Watch” and Forbes’ 30 Under 30.

KLIK 2017 will present six full days of film screenings in and out of competition, talks, installations, workshops, masterclasses and a can’t-miss closing party — plus a special retrospective on the last decade of festival favorites. The festival will also present a special kid-friendly day of shorts and activities on Oct. 30.

Once again, KLIK will be anchored by its international animated shorts competition, spanning several categories and showcasing the best films from around the world vying for the KLIK Awards — last year’s competition received over 1,800 entries from 83 countries. (Submissions are now closed for this year’s competition.)

The 2017 festival will also feature the themed program “Never Grow Up,” spotlighting works that question common conceptions about age and the expectations that go with certain ages and life stages. Alongside feature films, presentations and short film compilations, the experience of time is also expressed through special installations by national and international artists.

You may also like...
Related Topics:Daron Nefcy, Disney, Disney Television Animation, KLIK, Star vs. The Forces of Evil