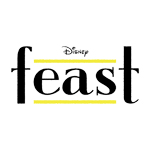 If you are lucky enough to be at the Annecy International Animation Festival, you may have seen an advance screening of Feast, a new animated short film from Walt Disney Animation Studios that most folks will see in front of Big Hero 6 when it opens Nov. 7.

Much like Get a Horse! before it, the experience of watching Feast is hard to convey through a description. The movie’s IMDb page is accurate in writing:

“The story of one man’s love life is seen through the eyes of his best friend and dog, Winston, and revealed bite by bite through the meals they share.”

But the experience of watching this movie is far more involving and emotional.

In presenting the film, director Patrick Osborne talked about the unique look of the film, which has a simplified design that he and the filmmakers decided to ground in reality by applying classic camera effects such as a shallow depth of field. The film also is told from Winston’s point of view, i.e., looking up from a dog’s point of view.

The film is a result of a shorts program that the studio finalized after the success of its previous two shorts: Paperman, which was attached to Wreck-it-Ralph; and Get a Horse!, which was seen in front of the mega-hit Frozen. The program is open to pitches from anyone in the company, with top exec John Lasseter making the final call on which pitch will be produced — and tossing responsibility for making it back to the pitcher.

Osborne pulled in help from around the studio to make the film, which was produced by Kristina Reed and has Jeff Turley on production design.

Expect to see Feast do some festival rounds, and then come up for a huge roll-out Nov. 7 with Big Hero 6, of which the studio offered Annecy attendees a little preview.

Adapted from an obscure Marvel Comics title, the movie follows young robotics genius Hiro, whose brother encourages him to use his powers for good via research. His most successful breakthrough is a soft robot named Baymax who is programmed to provide medical care and assistance to those who need it. But when Hiro’s brother dies, its his broken heart that needs mending and Baymax sets out to do just that — even if it means playing superhero with their friends in the mashup city of San Fransokyo.

A couple in-progress clips from the movie, directed by Don Hall, show the movie is going for the big heart that the studio did so well in Wreck-it-Ralph. The superhero action and its pedigree — not only is it a Marvel property, but a Marvel property created by Man of Action Studios, creators of Ben 10 — also should give the movie some cultural cache and ensure plenty of attention when it opens.