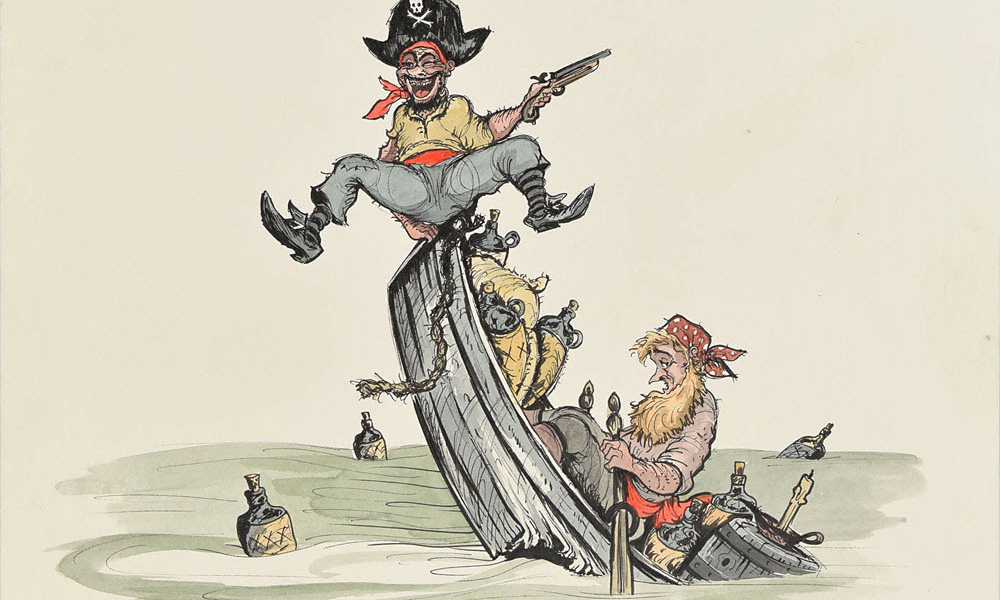 Pirates of the Caribbean concept art by Marc Davis

If you’re itching to get your hands on some amazing behind-the-scenes artwork and own a piece of animation history, be sure to check out the August Fine Autographs and Artifacts auction from Boston-based RR Auction, which is featuring a treasure trove of Walt Disney Studios pieces — 140 out of 194 animation lots. Online bidding is open through August 8 at www.rrauction.com.

Highlights include works by Eyvind Earle, including an original panoramic concept painting for Lady and the Tramp depicting the two lead dogs sitting by a starlit waterfront — an image which inspired the film’s famous “Bella Notte” sequence (tempera on artist’s board, signed). Another Earle panoramic painting from Sleeping Beauty shows the evil sorceress Maleficent on top of her castle tower, preparing to turn into the dragon (tempera on artist’s board, signed). Earle was production designer on the fairytale, with Disney grangin him significant freedom in design and color selection — the artist painted the majority of Sleeping Beauty’s backgrounds himself.

Admirers of Mary Blair will be charmed by a fuchsia-splashed Cinderella concept painting, showing the princess-to-be feeling the castle in her white ball gown, leaving a single glass slipper behind on the stairs. The piece is an excellent example of Blair’s ability to combine bold mid-century modern style with enriching, whimsical details (tempera on artist’s board). Blair worked for Disney in the 1940-50s, designing for classic films including Alice in Wonderland and Peter Pan as well as iconic Disney theme park attractions like It’s a Small World.

Also going on the block are two early concept designs for the Pirates of the Caribbean ride by Marc Davis — one of the legendary Nine Old Men who brought to life memorable characters such as Cruella De Vil (One Hundred and One Dalmatians), Maleficent (Sleeping Beauty) and Tinker Bell (Peter Pan). One painting depicts a pair of pirates on a sinking boat, one man still rowing while the other perches on the bow, as several jugs of rum float away (ink and watercolor on heavy paper, signed). The other depicts two startled crewmen stumbling upon a menacing pirate hunkered beneath a large Jolly Roger flag (watercolor on heavyweight paper). 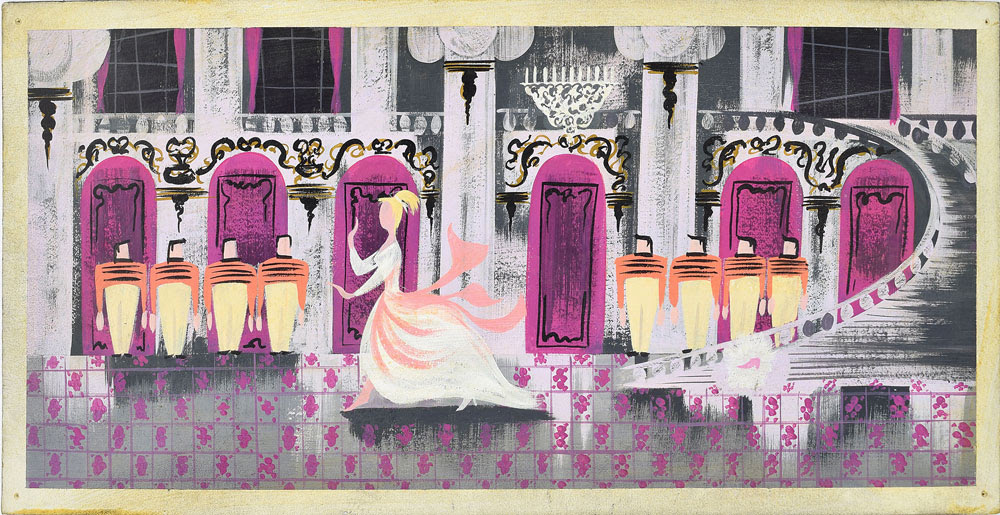 Lady and the Tramp concept art by Eyvind Earle