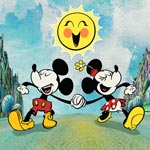 Ever since his big-screen debut in Steamboat Willie on Nov. 18, 1928 at New York City’s Colony Theatre, Mickey Mouse has been the global ambassador for The Walt Disney Company. Now, the massive media empire built from those early shorts is celebrating the character’s 90th birthday with festivities all year long, including an exclusive fashion show, new ABC TV special, Disney Parks celebration, and a fifth season of the Emmy Award-winning Mickey Mouse shorts.

The party kicks off March 7 with “The Happiest Show on Earth”: a runway fashion event featuring a Mickey-inspired collection designed by couture brand Opening Ceremony founders Carol Lim and Humberto Leon. The show will also be the label’s Spring 2018 runway show. Select items will go on sale immediately following the show at shopDisney.com, OpeningCeremony.com and Opening Ceremony stores; more ready-to-wear looks will hit stores in November. Minnie Mouse, who shares this milestone anniversary with Mickey and recently received her official star on the Hollywood Walk of Fame, will also be celebrated at the fashion show.

This collaboration will launch “Mickey the True Original,” a global celebration of Mickey’s heritage, personality and status as a pop-culture icon. The campaign will come to life through fashion collaborations with other true original brands, as well as engaging content and events that embrace Mickey’s impact on the past, present and future.

D23: The Official Disney Fan Club is also celebrating the milestone. Notably, D23 and the Walt Disney Archives, in partnership with Walt Disney Animation Studios, have commissioned legendary Disney animator Mark Henn to paint Mickey’s official 90th birthday portrait. Henn follows in the footsteps of artists such as Disney Legend John Hench, who crafted five of Mickey’s official portraits. Henn animated Mickey for Mickey’s Christmas Carol (1983) and is currently at work on Ralph Breaks the Internet: Wreck-It Ralph 2 (2018). The new portrait will debut on the cover of the fall issue of Disney twenty-three, a quarterly publication from D23.

The celebration continues through 2018 and beyond:

Since first hitting screens in 1928, Mickey Mouse has appeared in more than 100 cartoons. His most recent animated incarnations appear on Disney Channel’s Mickey Mouse shorts series (voiced by Chris Diamantopoulos) and Mickey and the Roadster Racers (played by Bret Iwan, official voice of Mickey since 2009).