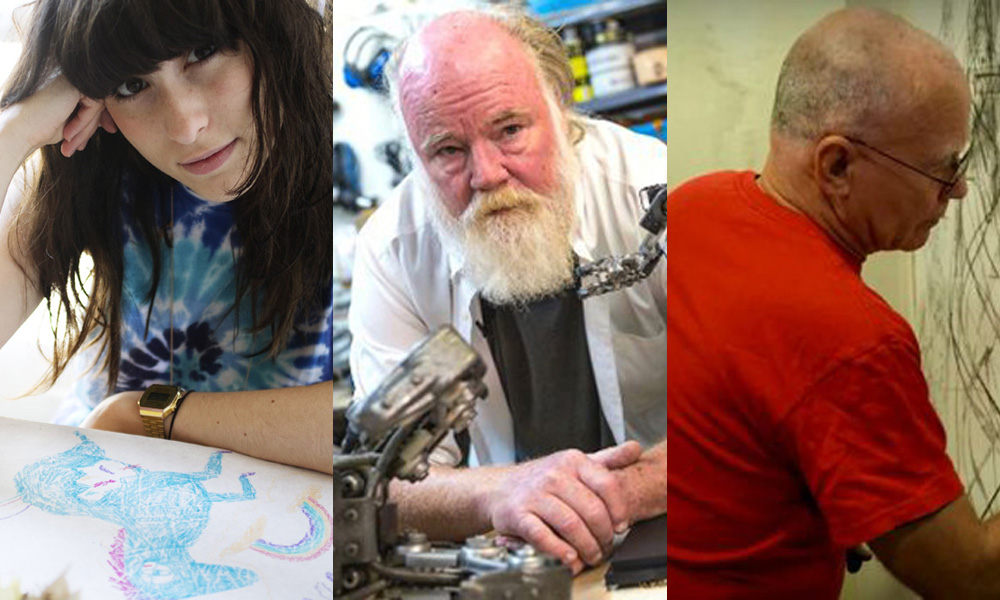 Organizers of the Frame-By-Frame Animators Conference (FxF), one of the U.S. Midwest’s premiere toon confabs, have confirmed a luminous guests of honor lineup for the 2019 edition: Phil Tippett, Julia Pott and Pritt Pärn. The day-long conference will be held at DePaul University in Chicago on Sunday, May 4, and is open to the public. Ticketing available through Eventbrite.

FxF brings together animators from across the country in a variety of disciplines, including TV, film, experimental, games, motion graphics, stop motion, hand-drawn and 3D. A wide array of guest artists will participate in conversation, screenings, panels, workshops and demos with an audience of animators and animation students. FxF is hosted by the DePaul Animation Program and the School of Cinematic Arts Visiting Artist Series. Last year’s inaugural FxF featured guests of honor PES, Joanna Priestley, David OReilly, Duarte Elvas and Raymie Muzquiz.

Phil Tippett is a legend in the visual effects and stop-motion fields. He first made his name as head of animation and creature design for George Lucas’ Star Wars films before launching Tippett Studio in 1984. From the chess scene and cantina band creatures of Star Wars, to the stop motion in Robocop, to the dinosaurs of Jurassic Park, Tippett has remained an innovator and a trailblazer. He is currently directing a multi-dimensional ride film for China, Monkey King: Havoc in Heaven. Tippett has two Oscars, one BAFTA, two Emmys and widespread acclaim for his role in the advent of modern digital effects. Phil Tippett will be interviewed by stop-motion

Julia Pott is the creator of Cartoon Network’s critically acclaimed animated series Summer Camp Island. Pott is a British animator and illustrator who graduated from Kingston University with first class honors, and in 2011, she graduated from the Royal College of Art with a Master’s degree in Animation. A festival darling, Pott’s films have played at festivals worldwide. Named as one of the 25 new faces of independent films by Filmmaker Magazine in 2012, Pott was also honored as one of the 37 indie film breakouts of that year by Indiewire. In 2015, she joined the Cartoon Network family as a writer for the Emmy and Peabody Award-winning pop culture phenomenon, Adventure Time. Julia Pott will be interviewed by animator Meghann Artes. (www.juliapott.com)

Pritt Pärn is a legendary Estonian animator, a recipient of the ASIFA Life Achievement Award, six lifetime achievement awards from international festivals, and has had over 50 solo exhibitions in various European countries over the past 35 years. From 1976 to 1994, he worked as an art director and animated film director at the Joonisfilm animated film department of Tallinnfilm Studios, and from 1994 at Eesti Joonisfilm Studio. Pärn has made 13 animated films of duration up to 45 minutes as well as a host of short films, commercials, etc., for which he received more than 80 prizes in international top festivals. He has illustrated more than 40 books for children and for grown-ups. In 2006 Pärn established the Estonian Academy of Arts animation program, where he is currently working as animation professor. Priit Pärn will be interviewed by Jacob Ciocci, co-chair of the DePaul Animation MFA program.

Joyce N. Ho is an art director and motion designer based in Brooklyn, NY. Ho began her career at Australian studio Breeder, where she worked on opening title sequences for the festival Analogue/Digital, contributing to the openings for the 2013 and 2014 editions. She has worked on the opening titles to TV series True Detective (2014) and The Expanse (2015), as well as creative festival Likeminds in 2017. She has been a finalist for Young Guns 15, the SXSW Film Award in 2014 and 2016, and winner of the One Screen Award, Create Design Award and the Australian Production Design Guild Award. In 2018, the title sequence she directed for Semi-Permanent Sydney 2018 was chosen as one of Art of the Title’s Top 10 Title Sequences of the year. Joyce N. Ho will be interviewed by DePaul Animation professor Chris Kalis. (www.joycenho.com)

Character Animation Masterclass: Brian Ferguson was a character animator for 23 years at Walt Disney Animation Studios. He was a supervising animator on Hercules, Mulan, The Emperor’s New Groove, Treasure Planet and Princess and the Frog, and an animator on The Lion King, Aladdin, Pocahontas, Tarzan, Chicken Little and Bolt.

Game Art Masterclas: Heinz Schuller started working in the games industry in 1993, and has served at companies including Viacom New Media, FASA Interactive, Microsoft Game Studios and Day 1 Studios. He is credited with art direction on popular PC and console games including Mechwarrior 4: Vengeance, F.E.A.R. 3 and Avatar Laser Wars II. Heinz also served as Publishing Art Director at Microsoft on games like Mechassault, Mechassault 2 and Crimson Skies: High Road to Revenge. He recently completed art direction for the Steam Early Access title Savage Lands, and is working on the new upcoming title.

Keep up to date with FxF through the event’s Facebook page.