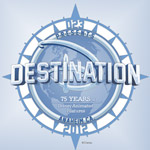 Disney will put its long animation history in the spotlight at D23’s Destination D: 75 Years of Disney Animated Features, set for August 11-12 at the Disneyland Hotel in Anaheim.

The event, hosted by Disney’s official fan club, will cover the studio’s long, proud history of animated features, from 1937’s Snow White and the Seven Dwarfs to the upcoming Wreck-It Ralph.

Highlights of the event include exclusive previews of upcoming films from Walt Disney Animation Studios, salutes to the great Disney animators and artists of the past, hands-on activities, an extraordinary reunion of Disney animated voice talent, a glimpse at how the Disney animated features have influenced the Disney parks, rare and never-before-seen artwork and film footage, plus a special salute to Snow White.

Saturday ends on a “Jolly Holiday” note with a concert by Dick Van Dyke and The Vantastix performing timeless Disney songs and pop standards. Sunday’s program ends with a rare concert appearance by eight-time Oscar-winning composer/songwriter Alan Menken, who will perform some of his most memorable songs from many modern-day Disney film classics, and more.

Tickets to the event are available to D23 members only, cost $225 and go on sale April 18. See the link here for details.

And for fans who want even more special Disney animated feature info, there is a Diamond-Level Ticket for $1,000 that offers reserved VIP seating at all presentations and concerts, meet and greet opportunities, a special gift bag, and a third day of activities that includes tours of the animation facilities at the Disney studio lot in Burbank.