The spring issue of Disney fans’ twenty-three magazine pays tribute to the legacy and influence of Disney’s animated films. The official Disney fan club takes readers on a colorful and informative journey from the studio’s first animated classic—Snow White and the Seven Dwarfs—to the projects being readied for 2012 and beyond.

Available nationwide on February 14, D23 will also include the transcriptions from Walt’s story meetings with his animation team as they developed such classics as Fantasia, Pinocchio and Cinderella. The special issue will showcase inventive, cover that incorporates a removable replica animation cel from Snow White.

“It’s often been said that animation is the heart and soul of Disney, so we knew we needed to do something truly spectacular with our magazine in this milestone year,” said Steven Clark, head of D23. “Whether you’re interested in the first Golden Age of Disney animation or you’re looking forward to the next beloved classic, there’s something in this issue for every Disney fan.” 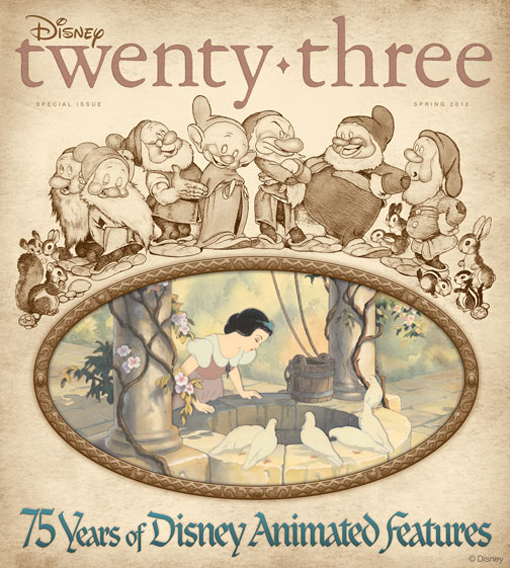 The issue will feature a special article by film historian and Oscar winner John Canemaker focusing on how Disney animated films have continuously raised the bar for three quarters of a century, since audiences were first enchanted by Snow White. Also included in the Spring issue are:

Ralph’s Wrecking Crew: An early glimpse at the process of producing Wreck-It Ralph, the next feature film from Walt Disney Animation Studios;

Ballyhoo and Buzz: A colorful look at some of Disney’s off-the-wall stunts for marketing new movies before the advent of broadcast and digital media;

Striking the Right Chords: An exploration of the memorable music written for animated features, with insight from film historian Leonard Maltin;

A Work of Art: An introduction to Disney’s Animation Research Library, home to 65 million individual pieces of original animation art.

Disney twenty-three magazine is available at retail locations across the country for $15.95, and can also be purchased online at DisneyStore.com or Disney.com/D23.