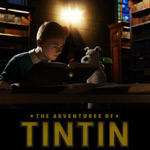 On Friday, Spielberg, Jackson and actor Andrew Serkis were all present to treat Hall H audiences with a sneak peak at the December Paramount release and share tidbits about the making of the movie.

The panel began with Spielberg being presented with Comic-Con’s Inkpot award for achievement in film, which also included a clip reel of the highlights of his career (from Duel and Jaws all the way up to Minority Report and War of the Worlds), followed by a rousing standing ovation from the fans. L.A. Times journo Geoff Boucher moderated the panel, which began with questions about how Spielberg became interested in Tintin, a comic-book character created by Belgian artist Herge, which is more popular in Europe and Asia than the U.S. Spielberg  told the audience that he first learned about the character when a French critic compared the first Indiana Jones movie to a Tintin adventure back in 1981. He then sought out the book and realized that Indiana Jones and Tintin could be cousins as they both get involved in mysteries and play an active role in the story, one as an archeologist and the other as a globe-trotting reporter. 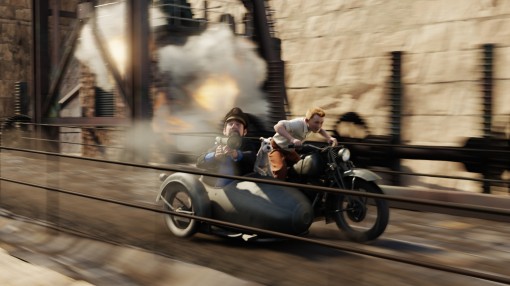 Scene from The Adventures of Tintin: Secret of the Unicorn.

The director then delved into his reasons for using performance capture technology. He said, “When you cast a live-action movie, you try to find the best actors for the part. But in a performance capture movie, you don’t have to worry about how closely the actors resemble the parts physically. In this movie, you don’t necessarily identify Daniel Craig with the part that he plays, but you will see every nuance of his performance through the thin digital skin created by Weta,” he noted. “Six years ago, when I had to make the decision whether I was going to shoot the movie in live-action with a digital dog, I asked Weta to show us what a digital dog would look like, perhaps interacting with a character in costume from the Tintin period, and here is what they gave us.”

Spielberg then shared a hilarious “test clip” featuring Snowy as a digital dog interacting with Peter Jackson, dressed as the booze-loving Captain Haddock character. Snowy then proceeds to drink from a spilled bottle of rum and dizzily dances himself right off the dock into the water. Jackson then joined the director on stage, and received another standing ovation from the enthusiastic audience. When asked about the biggest challenge on the feature, Spielberg said that he wanted the movie to look like the drawings in the Herge books and to remain as close as possible to the artist’s storylines. “We didn’t want to cast actors who looked like the characters,” said the director. “We love the art so much and wanted to honor Herge, so we wanted to get as close to the characters that he invented and not base it on the movie stars that look like big movie stars.”

Jackson also echoed Spielberg’s notions. “It was important for us to get as close in the 3-D world to Herge’s character as we could,” he said. “The characters have these unique faces that you will never find in a human being — so we wanted — the pores in the skin, freckles, stubble and texture and level of detail that the movie almost looks like live-action, while retaining Herge’s faces and body shapes. We wanted to create a version that allowed Steven to step inside the world and actually shoot the movie. Spielberg had a camera and was able to film the performance capture just like a live-action film similar to Avatar.

Spielberg then spoke of the advantages of performance capture technology, comparing it to shooting 8mm films and working the camera like a Playstation controller. “It’s a lot like being a painter because the director is able to control so many different aspects of the film (like lighting, costumes, grip, etc.)” When asked about his camera work, Spielberg said that he was able to film a lot handheld, pulled off some footage that looks like steadicam. He was using new tools to tell the story. Speaking specifically about performance capture, he said it’s not a medium that’s right for every film, but it was right for this film. What’s more, he confirmed that a Jackson-directed sequel is planned and hinges on the success of this first film saying, “If you decide it’s worth seeing, then Peter gets to make the next one.” 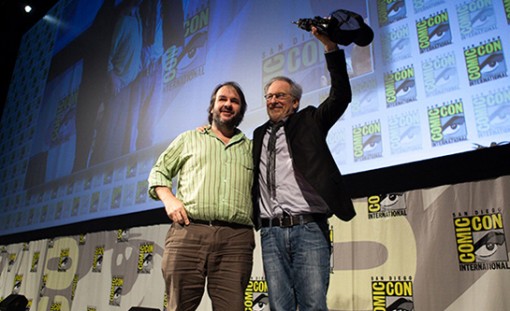 Peter Jackson and Steven Spielberg on stage at Comic-Con to discuss
The Adventures of Tintin: The Secret of the Unicorn.

After showing several action-packed minutes and the widely seen first trailer of the film, Spielberg and Jackson talked about the nature of their collaboration.  Spielberg said the first time they met was when he handed Jackson the Academy Award for Best Director for Lord of the Rings: Return of the King. He also noted that aside from his “best friend George Lucas,” this is the best collaboration he’s ever had. Among the other tidbits the two film giants revealed:

Here is the trailer for the movie, which is set to premiere in the U.S. on Dec. 23: