+ Stan Lee’s Cosmic Crusaders — the new adult-targeted action/comedy animation series from POW! Ent. and Genius Brands — has launched July 19 on The Hollywood Reporter‘s website. The first four episodes will premiere exclusively on THR during CCI, and will be available in Virtual Reality from Legend VR with smartphone “VR Boxes” available at the Con.

+ Warner Bros. will be packing its CCI booth (#4545) with an array of cool stuff in addition to the jam-packed WBTV panel schedule. Don’t miss the 7-foot LEGO Batman (constructed from 53,998 bricks that took 45 hours to design and 340 hours to build) and take and share a pic in the custom brick-built “Batman Selfie Booth.” Pick up collectible Wish You Were Here postcards featuring Teen Titans Go!, Animaniacs, Justice League Action and more. Conjure magic at the Fantastic Beasts and Where to Find Them Wand Master Training Station and cast signings — plus check out the Fantastic Beasts and Harry Potter expansion packs for LEGO Dimensions. And see how you measure up to the real Arrow, The Flash and Supergirl TV costumes.

+ Sanrio will be launching a new brand, hello sanrio, at their CCI booth (#4737). The innovative new lifestyle brand incorporates classic Sanrio characters and newer icons a into a suite of apps, digital content and kawaii products. Sanrio and Hyper Hippo Games will debut the say hello! app at their booth and seek fan input for future apps. A limited edition series of five mini plushies (Hello Kitty, Chococat, My Melody, Keroppi, Pompompurin) in a clear vinyl tote will be available at the booth, where a designer from Sanrio’s Tokyo HQ will be on hand to draw characters for a select number of fans. Fans can also enjoy sweets from the Hello Kitty Cafe Truck at the Interactive Zone in Petco Park.

+ The Peanuts gang will have an off-site presence as Bubbles Boutique on Fifth Ave. turns into the Snoopy for President pop-up shop. Visitors to the Gaslamp district campaign HQ can vote for the Peanuts candidate of their choice, register to vote in the November U.S. election, customize buttons, collect stickers and learn more about the Charles M. Schulz Museum in Sonoma Co., California. 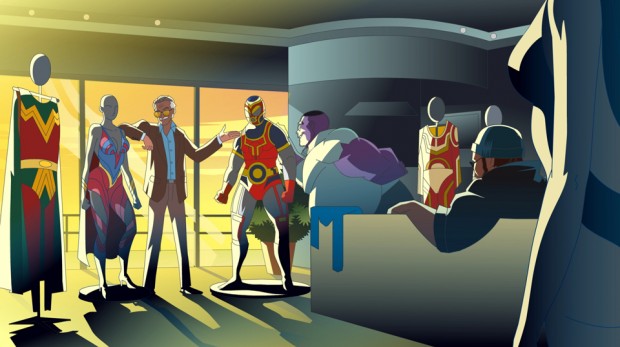