Comedy Central is heading to San Diego Comic-Con with a slew of events schedule, including an all-out fan experience celebrating the 20th anniversary of Trey Parker and Matt Stone’s iconic, irreverent comedy, South Park. CC is also planning panels for Drunk History and new animated series Legends of Chamberlain Heights, a live performance of The Meltdown with Jonah and Kumail, and live Snapchat coverage from musical/performance artist That Poppy.

On Thursday, July 21 from 6:45-7:30 p.m. at the Hilton Bayfront Indigo Ballroom, the Legends of Chamberlain Heights panel introduces CC’s newest animated series, premiering this fall. The show mixes raucous comedy and social commentary, centering on three friends navigating through their freshman year in high-school: “Jamal,” “Grover” and “Milk.” The three basketball benchwarmers tackle life with some wins and some losses, but failure doesn’t faze them since they’re legends…even if it’s just in their own minds. Legends is executive produced by Bento Box’s Joel Kuwahara and Scott Greenberg (Bob’s Burgers, Brickleberry), along with showrunner Devon Shepard. The Simpsons veteran artist Brad Ableson developed the original concept with former UCLA basketball players Quinn Hawking and Josiah Johnson.

On Friday, July 22 at 5:00 p.m. the Hall H South Park 20 panel will be moderated by @midnight’s Chris Hardwick. Panelists will discuss the evolution of the series over the last two decades, take questions from fans and provide an exclusive sneak peek of South Park: The Fractured But Whole, the highly-anticipated next-gen video game from Ubisoft and follow-up to the wildly-popular and award-winning South Park: The Stick of Truth (2014).

The centerpiece of the celebration, South Park 20 Experience, will allow fans to explore and insert themselves into 20 fan-favorite scenes. Visitors can recharge their bodies, minds and devices at the Hulu Viewing Lounge, which will be screening episodes across all seasons of South Park. “The Coon & Friends Experience” from Ubisoft featuring real-world items from the highly-anticipated new video game, South Park: The Fractured But Whole will be open to explore. Twenty unique artists will honor South Park‘s 20th season with new work that has been curated by world-renowned pop culture artist Ron English. Fans can also visit a retrospective gallery featuring original animation cels from the pilot episode of South Park. All this and much, much more will be available at the South Park 20 Experience. 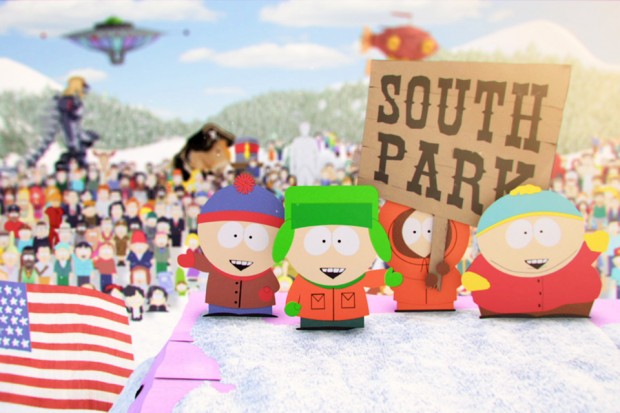