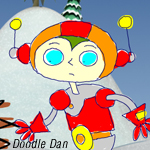 From more than a hundred entries, Doodle Dan was chosen for its originality, humor and imaginative use of animation. The students who made it are: Nicolas Thomson, Stephen West, Jonathan Wharmby and Pei Sze Wong.

The story of Doodle Dan involves a cartoon astronaut and his friend Mit, who come to life when no one is looking. Mit ends up getting into mischief and it’s up to Dan to make sure Mit is alright and that he gets back into their picture safely. The short film also features Chris Chittell, known from his role as Eric Pollard in Emmerdale.

“The CBeebies Student Commission provides a great platform for recognizing talent in the North West,” says Phil Chalk, senior producer at Chapman Entertainment. “We were very pleased to mentor such a talented bunch of students at the Chapman studio. They were very motivated, creative and embraced the whole experience. The end result is brilliant!”

“This exciting project gave students from the North West a chance to experience the production process from beginning to end including pitching, writing scripts, storyboarding to the final sign off on the animation. It was wonderful to be able to give this unique opportunity to young talented film makers, who in turn have created great content for the CBeebies audience,” says Sarah Colclough, executive producer at CBeebies.