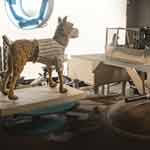 Fox’s games and VR division, FoxNext, took the stage at the Consumer Electronics Show in Las Vegas to offer a sneak preview of Isle of Dogs Behind the Scenes (in Virtual Reality), an upcoming project that will be fully unveiled at Sundance’s New Frontier.

Created by VR Company Felix & Paul Studios and funded by Google, the short film will take viewers into the actual stop-motion world of the upcoming Wes Anderson film, where they’ll be face to face with the actual characters blown up to life size (or, more accurately, the viewer is shrunk down to their size). The voice actors will respond in character on the virtual set of the movie. This will include Bryan Cranston, Scarlett Johansson and Jeff Goldblum as their dog characters.

“We kind of liked the idea of the actors looking like the characters they’re playing, almost as if they’re in between takes, talking about their roles,” said Ryan Horrigan, chief content officer of Felix & Paul Studios. “We thought that was really fun —  I don’t know that ‘meta’ is the right word — but innovative.”

Though it’s only a “making of,” the stop-motion animation took three months and five built sets to

complete. The actual film, in true Wes Anderson style, plays out in a very flat one-point-perspective style like a stage play, but the 360 degree VR view required Felix & Paul to create a “back stage” scenario behind the scenes. As the stop-motion plays out in real time, human actors are depicted in hyper speed as they manipulate the puppets. A giant Wes Anderson himself pantomimes movements to illustrate ideas for the animators. It’s not unlike Laika’s numerous end credits sequences at the end of their films where you watch the animators at work, but the sense of scale and the 360 degree view aims to put the viewer in the perspective of the figurines themselves.

“We thought that was really unique and interesting to put you more in the context of these characters, these puppets, and the humans behind you are the foreigners, or the aliens, who are giants, kind of doing their work,” said Horrigan. “For Wes, I think it was a subtle nod to all of the animators and people who were working on the film, to acknowledge them and their craft.”

Following its debut, Isle of Dogs Behind the Scenes (in Virtual Reality) will be released via the Google Spotlight Stories app for Android and iOS, as well as Google Pixel phones.

Isle of Dogs will hit theaters on March 23rd. 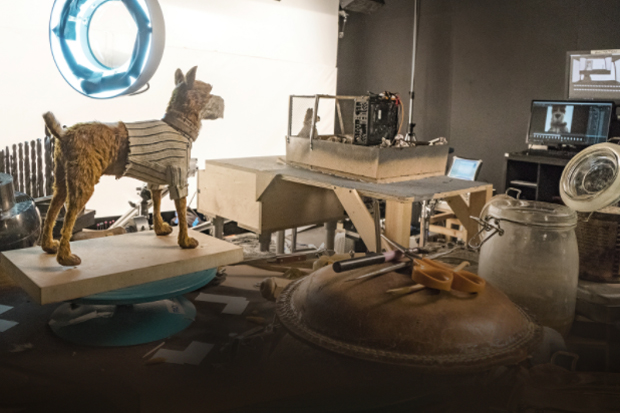