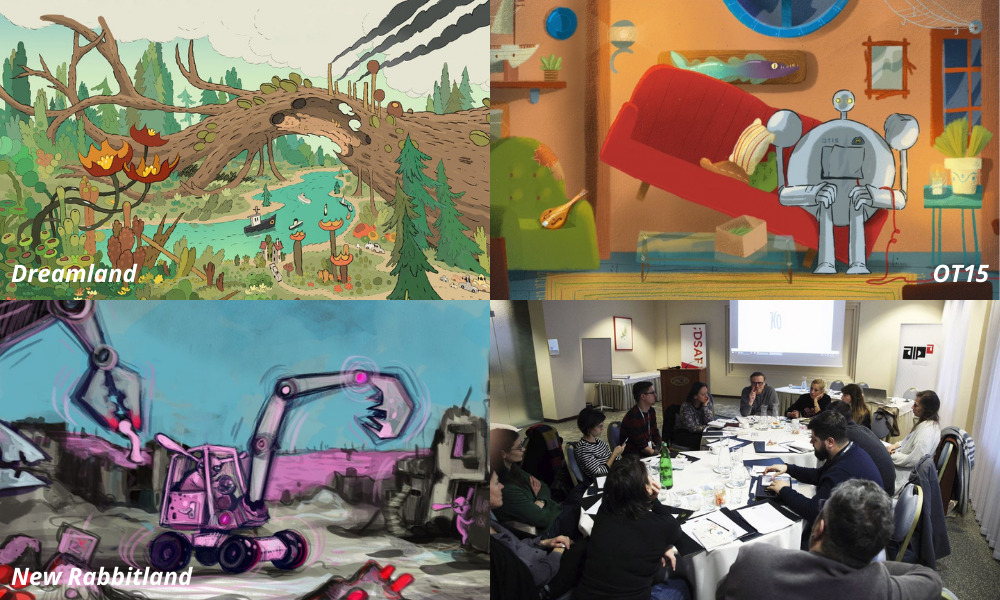 Organizers of the year-long CEE Animation Workshop have again received a record number of applications this year, as the training program continues to grow year by year. Applications came from 19 countries, as the call was open to all E.U. countries for the first time. Thirty-two participants from 12 countries will attend the 2022 edition, split between 12 teams with an animated project and four career-oriented participants.

“The traditional pool of countries from the CEE region will be even more diverse this year with the addition of participants from Sweden, France and Poland. All indications show that we have another very strong year ahead with exciting projects to be mentored, developed and packaged to hit the funding market by November 2022,” explains Juraj Krasnohorsky, Head of Studies.

The selection is balanced — the proportion of female participants reaching almost a half, — and diverse in terms of the animation project format, with three feature films, three TV series, one TV special and five short films. The topics addressed are also varied, ranging from children’s tales to adult issues.

Participants will follow three online and one residential module throughout the year. The closest collaborators for them will be group leaders and script advisors. Through expert lectures, moderated discussions, group work and individual consultations, they will provide their own feedback and offer their expertise on participants’ projects, drawing from rich professional experience as leading European producers. Script advisors will work with the project teams individually and in group sessions, helping them formulate the voice of their story in the best possible way in terms of the dramatic structure, genre, and story arc.

In addition to following the complete Workshop program alongside the project teams, four career-oriented participants will also receive personalized mentoring on their career and company strategy development. The program tailored to the needs of animation creatives will see the selected projects from their early stages to the final developed production package, ready to access the market. 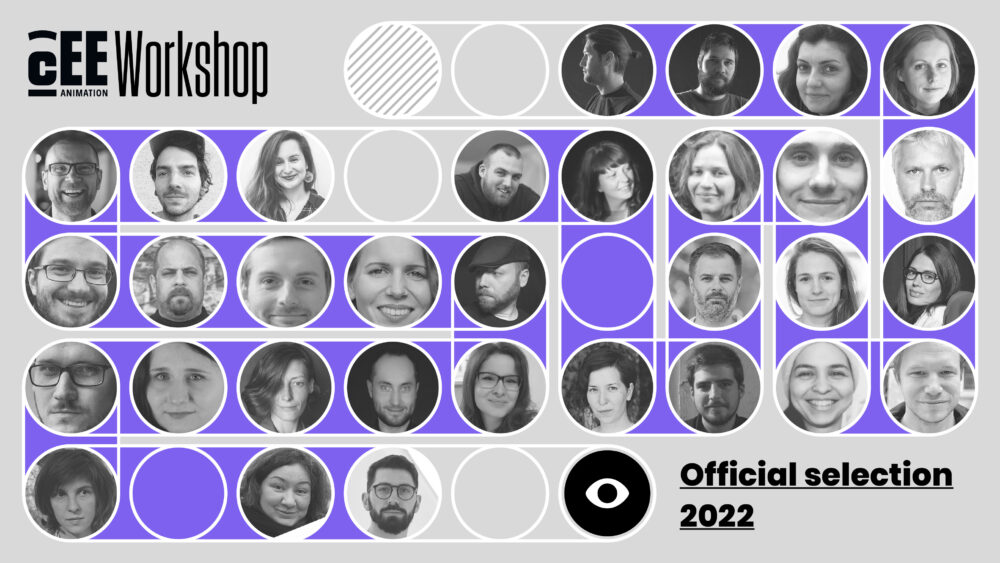 Dreamworld director: Veljko Popović; producer: Milivoj Popović, Prime render d.o.o. (Croatia) — A group of “uncool” kids struggling to navigate the perilous world of social media use lucid dreaming to open the door to the Dreamworld, a place where they can be anything, and encounter its ruler, Morpheus. 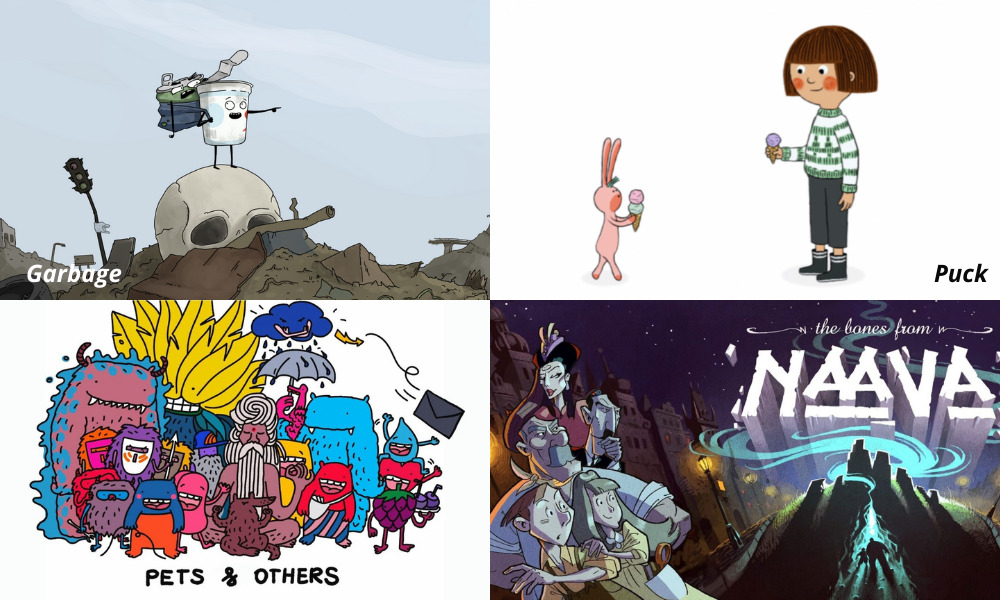 Garbage scriptwriter: Jaroslav Klimeš; producer: Jindřich Trčka, COFILM (Czech Republic) — Long after humanity kicks the bucket, leaving a completely trashed planet behind, a naive yoghurt cup teams up with an old beer can to traverse the treacherous trashland and reunite with his lost yoghurt cup love.

The Bones from NAAVA director and scriptwriter: Tereza Došková; art director: Mikuláš Podprocký; producer Tomáš Šimon (Czech Republic) — In 19th century Prague, on the eve of the industrial revolution, our young hero and his mentor, an amateur archeologist, uncover a web of supernatural intrigue as mysterious artifacts emerge from the earth and fall into the hands of those who would use their power for nefarious purpose.

Pets and Others (Special) director and scriptwriter: Justyna Osiecka; producer: Paulina Zacharek, Momakin Sproducer z o.o. (Poland) — Step into a colorful world inhabited by creatures personifying a unique human emotion which guides their life, as they solve problems in unconventional ways and live each day in the here and now. 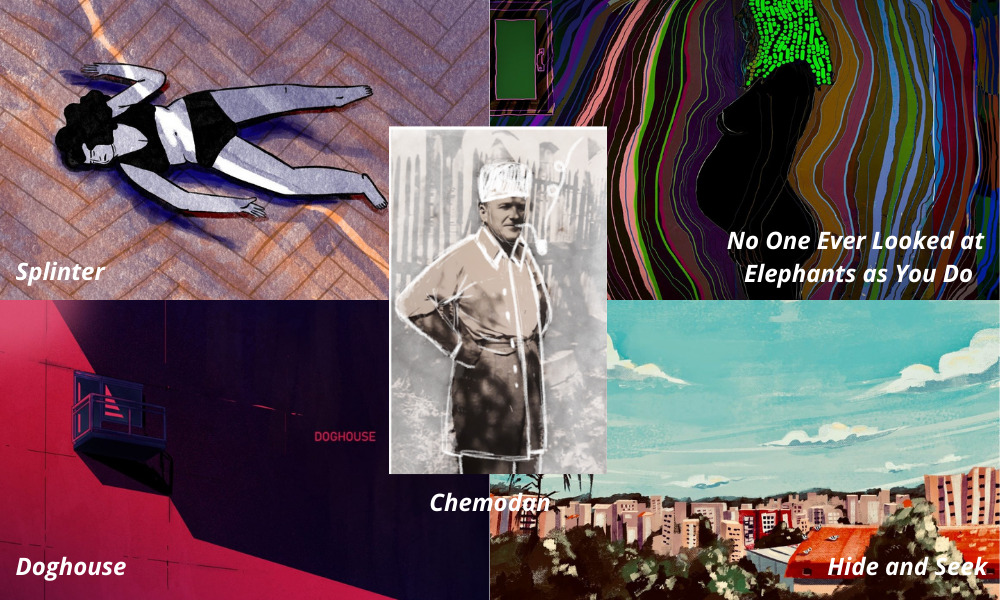 Doghouse director: Réka Anna Szakály; producer: Daniel Deak, Daazo Film and Media (Hungary) — Emma travels back to her hometown for the weekend to take care of the aging family dog while her parents are away. These surreal final days together and goodbye to the beloved pet help Emma to come of age and be herself.

Hide and Seek director: Ana Aleksovska; scriptwriter: Vladimir Dimoski (Serbia, North Macedonia); producer: Ivan Popovic, Sineast (North Macedonia) — A fairytale(ish) childhood is shattered when a young boy learns that the family’s baby brother was not taken from them in the way they thought.

No One Ever Looked at Elephants as You Do director and scriptwriter: Sandra Jovanovska (North Macedonia); producer: Miha Černec, Staragara (Slovenia) — An extremely intimate insight into early motherhood reveals a bizarre connection to Mother Nature, rendered in stop-motion animation.

The Splinter director: Bara Halirova (Czech Republic); scriptwriter: Vykintas Labanauskas (Lithuania); producer: Karolina Davidova 13ka (Czech Republic) — When a reclusive young woman moves into an old apartment, she becomes infatuated with a human-shaped stain on the floor. A chance splinter becomes an escape tool for a tiny, naked version of herself who crawls out and runs away to enjoy the social life that intimidates her.

Find more information on the selected projects and participants at ceeanimation.eu/news/cee-animation-workshop-announces-its-selection.