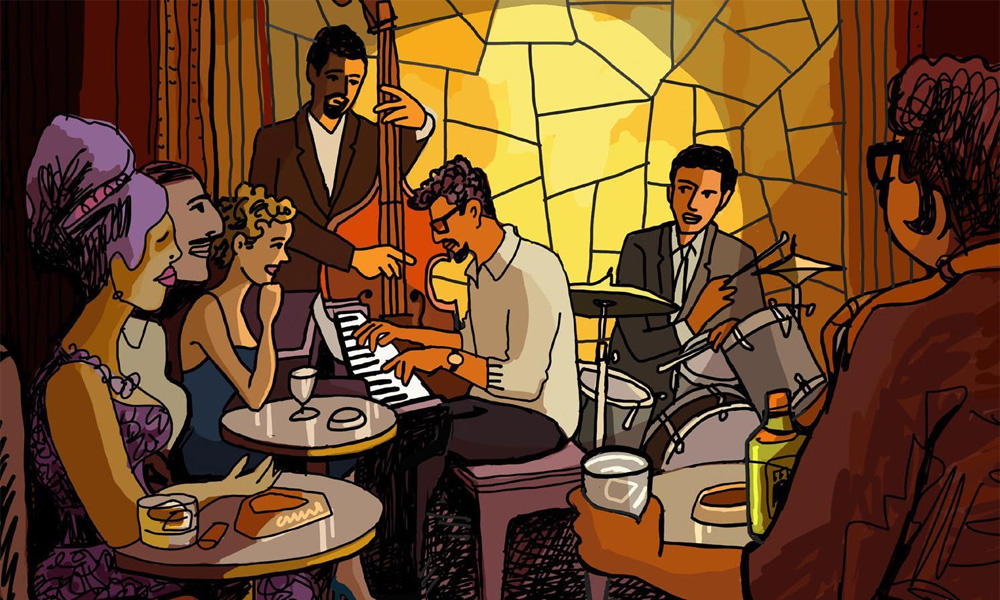 If you were to judge the health of the European animation feature industry by the quality of the projects presented at the latest edition of Cartoon Movie in Bordeaux (March 3-5), the industry is faring quite well: There are many interesting, innovative and thought-provoking projects made for both family and adult audiences in the pipeline. We were fortunate to catch some of these presentations at the event. Sadly, it’s humanly impossible to attend every session, since the pitches take place in two different rooms simultaneously throughout the day.Here are some of the highlights from the 2020 edition: 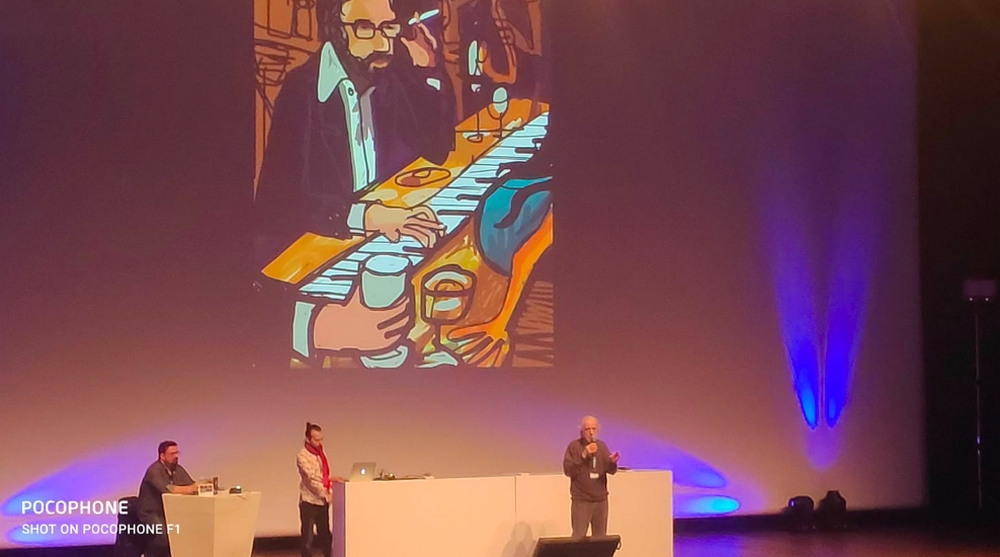 They Shot the Piano Player presentation at Cartoon Movie

Oscar-winning Spanish helmer Fernando Trueba (Chico and Rita, Belle Epoque) offered an intriguing trailer for his latest project, which is co-directed by his collaborator Javier Mariscal. The story centers on a fictitious New York music journalist (voiced by actor/musician Jeff Goldblum) who decides to investigate the mysterious disappearance of a young Brazilian piano virtuoso. “I have been a fan of Brazilian jazz music for a long time and wanted to make a movie that would do justice to the fascinating and true story of one of the great Bossa Nova musicians, Francisco Tenorio,” said Trueba.

The director and his team interviewed many people who knew the musician or had knowledge of what had happened to him when he went out to buy a pack of cigarettes in Buenos Aires and was never seen again. Trueba said the film will be set in different eras, from the ’60s, ’70s, ’80s and the 2000s and travel to New York City, Rio and Buenos Aires, using the same style of animation seen in Mariscal’s previous work, accompanied by the infectious music of Brazil. It will also examine some of the daily horrors of the dictatorships in Latin America over the past half a century, while also exploring the popular sounds and music of the region. 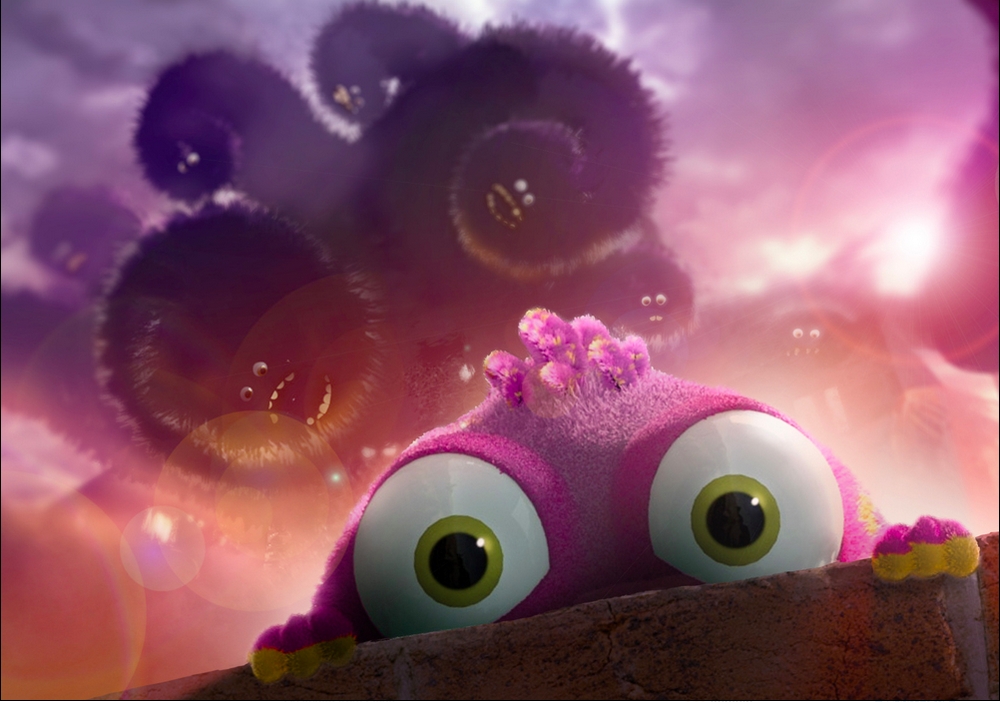 Antti Haikala, co-founder and head of animation at Helsinki-based studio Anima Vitae (Moomin Valley, Niko and the Way to the Stars), presented an engrossing pitch for his studio’s upcoming movie, which centers on a young boy who discovers a mysterious alternate reality after a leg injury leaves him unable to walk. “I came up with this magical character Fleak to entertain my sons when they were younger,” said Haikala. “On the surface, our movie is about a 12-year-old boy’s adventure with this friendly creature from another dimension, but it also explores the character’s relationship with his older siblings, their daily conflicts and the notion of courage.”

Haikala added that he and the film’s director Jens Moller wanted to create a world that looked unique and something that audiences hadn’t seen before. They also interviewed many children with disabilities to offer a positive message about persevering, bravery and the power of imagination in the story. A co-pro between Anima Vitae (Finland), Anima Vitae Point (Malaysia), Animoon (Poland) and Godo Films (France), the CG-animated pic is looking at a summer 2023 premiere date. 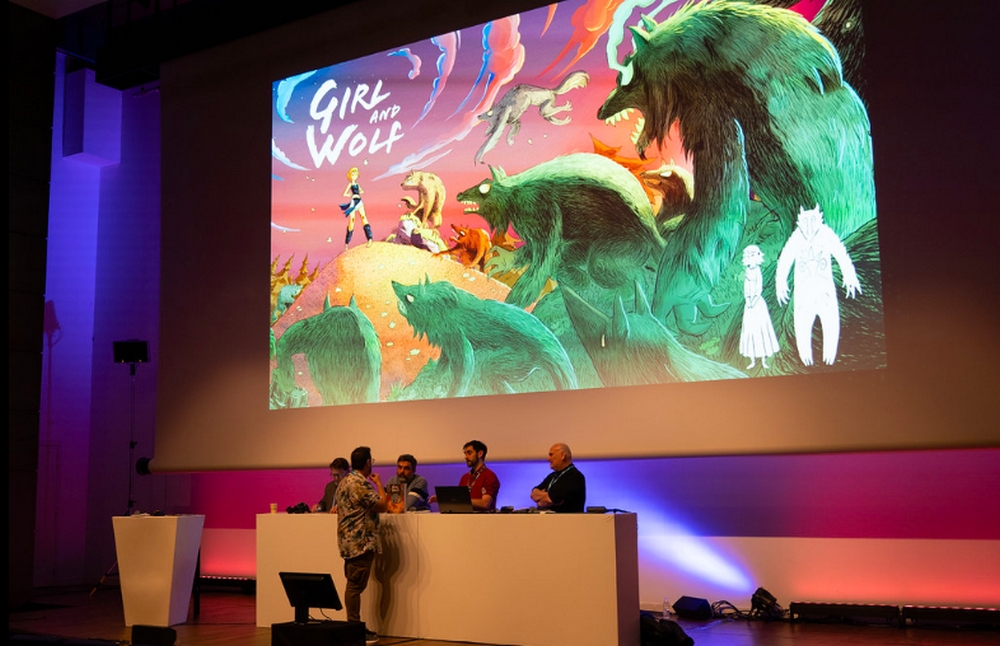 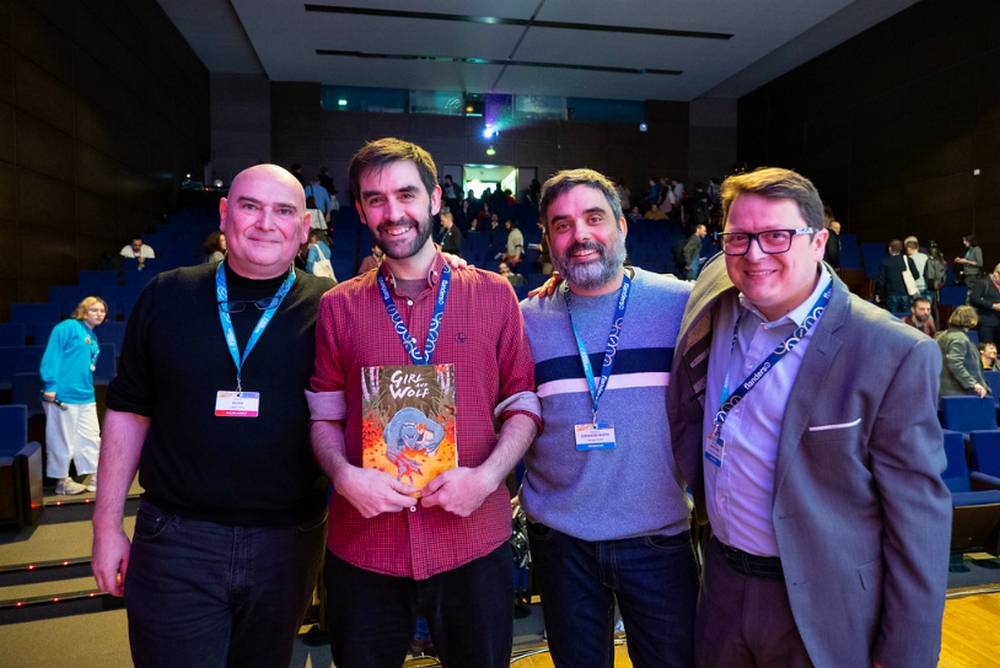 Spanish graphic novel creator and animation veteran Roc Espinet put on a fantastic show as he pitched the animated adaptation of his best-selling 350-page work Girl and Wolf to the Cartoon Movie audience. Sharing animatics and stunning art from the project, Espinet (who has worked on movies such Birdboy: The Forgotten Children and the short Decorado), highlighted the great visuals and the original story of a young girl named Paula who discovers her true self and learns that there’s a world beyond her small-minded medieval village after she is taken in by a pack of ancient wolves. “Paula feels that she belongs to this magical world of the wolves,” explained Espinet. “There are also ancient magical spirits at work, and along the way they all help her discover her special powers, face her dark past and become empowered in a meaningful way. The movie has an estimated 2.8 million euro budget and we hope to have final delivery in 2023.”

The film’s producer and sales agent Antonio Saura of Latido Film added, “This is a very well-told and timely story about a girl who suffers from bullying and being mistreated, but then realizes her own potentials and becomes truly empowered after she discovers the world beyond her village and inn-keeping.” The film is a co-pro between Hampa Studio (Bunuel and the Labyrinth of the Turtles) & Sygnatia in Spain. We predict big things for the ebullient Mr. Espinet and his talented team.

You can check out one of the earliest teasers for the movie here: vimeo.com/173603974 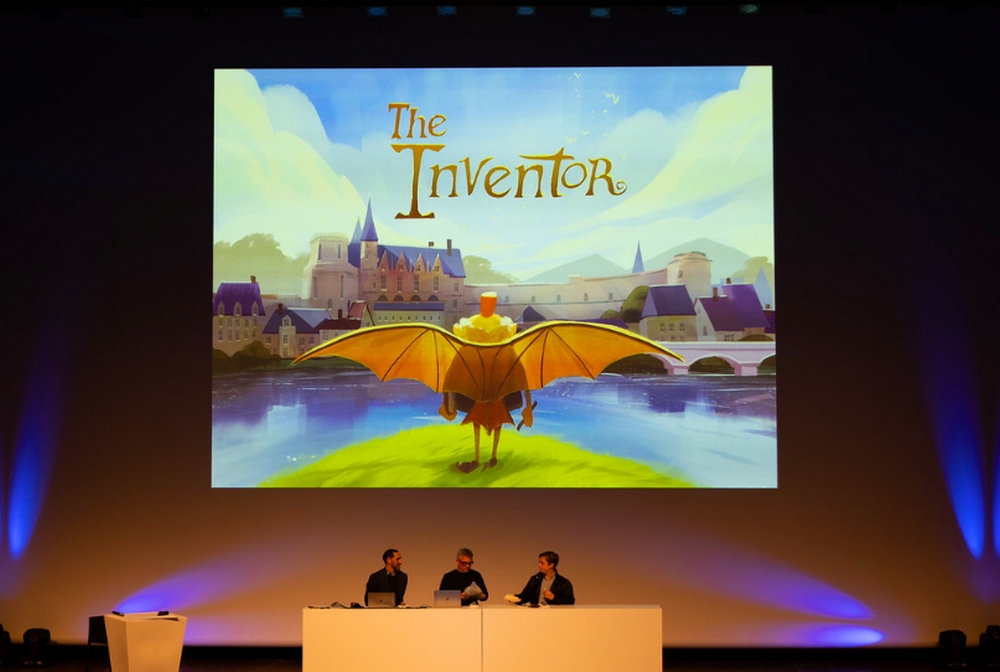 On Wednesday, Pixar and Disney veteran Jim Capobianco delivered a beautifully mounted introduction to his passion project — a mixed-media feature based on a particular chapter in the life of Renaissance master Leonardo Da Vinci. Capobianco, who has worked on many beloved movies including The Lion King, Ratatouille, Monsters, Inc., Finding Nemo, Inside Out, Finding Dory and Mary Poppins Returns), discussed his love for 2D animation and stop-motion animation and what drew him to the world of the celebrated Italian artist.

“I was always drawn to the European sensibility of filmmakers like Jacque Tati and Besson, and I was fascinated by the life and achievements of Da Vinci, so I felt the movie should be made in Europe,” said Capobianco. “The Leonardo of this movie is not the wacky inventor nor the superhuman genius we have seen depicted in other projects before. He is a gentle soul who cares about people and is a truly human artist with these amazing ideas who longed for change and amazingly enough, thought of himself as a failure. He searches for the meaning of life and is concerned about his legacy and wants to leave the world a better place.”

Capobianco, who also directed Philharmonia Fantastique, an innovate animated project premiering in conjunction with the Chicago Symphony in March, noted that he hoped to combine what he had learned from all his years at Pixar with the work of indie European craftspeople. The film’s estimated budget is 8 million euros. Robert Rippberger is producing the movie, with Oscar-winning Disney veteran Don Hahn exec producing. French Studio Folioscope (The Tower) is the producing partner with Leo & King (U.S.). 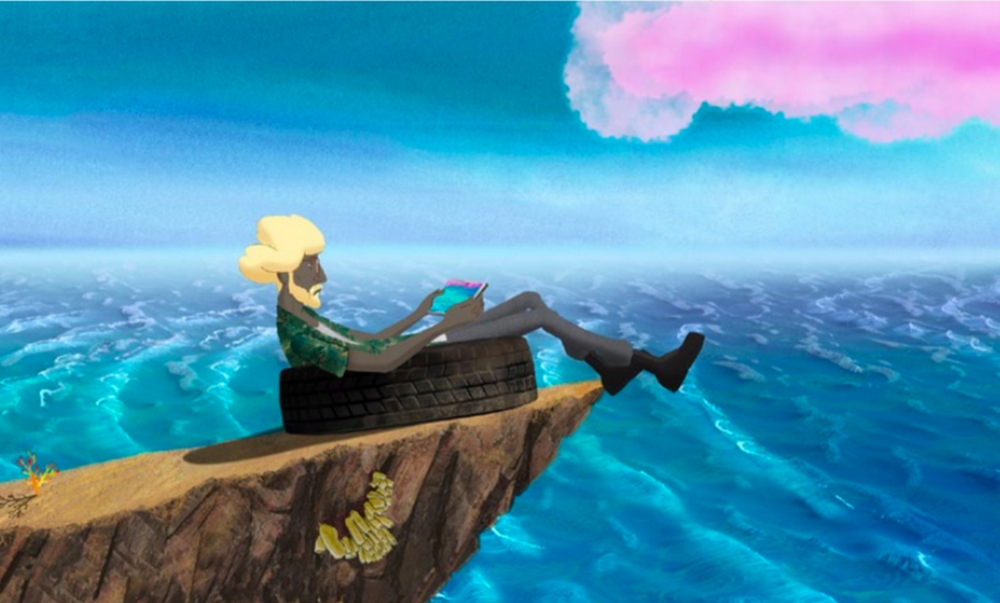 What do you do after dazzling global audiences with your highly artistic movie about a dog’s complicated life and owners? If you are Romanian director Anca Damian (Marona’s Fantastic Tale), you dive into something entirely different—like a post-modern, widely imaginative and outrageous take on Robinson Crusoe. This new venture promises to be a fever dream packed with potent images commenting on a wide range of contemporary subjects.

“In this re-interpretation of a post-colonial story, our Robinson is a doctor and Friday is the only survivor of a lost boat in the Mediterranean,” explained Damian. “It’s a surreal augmented reality world as we see Robinson trying to adjust the world with his digital tablet.”

Along the way, the story’s protagonist encounters some very modern mermaids, mutant animals, Burning Man-style pirates, a solar eclipse and a character called Grandmother Nature. Did we mention that The Island is a musical, with songs by Alexander Balanescu and Ada Milea. The script is by Damian and Augusto Zanovello. Art direction is by Gina Thorstensen who also worked on Marona. The film is a co-pro between Aparte Film (Romania) and Take Five (Belgium). With a 1.6 million euro budget, The Island is looking at a January 2021 release. This is definitely not your father’s animated movie! 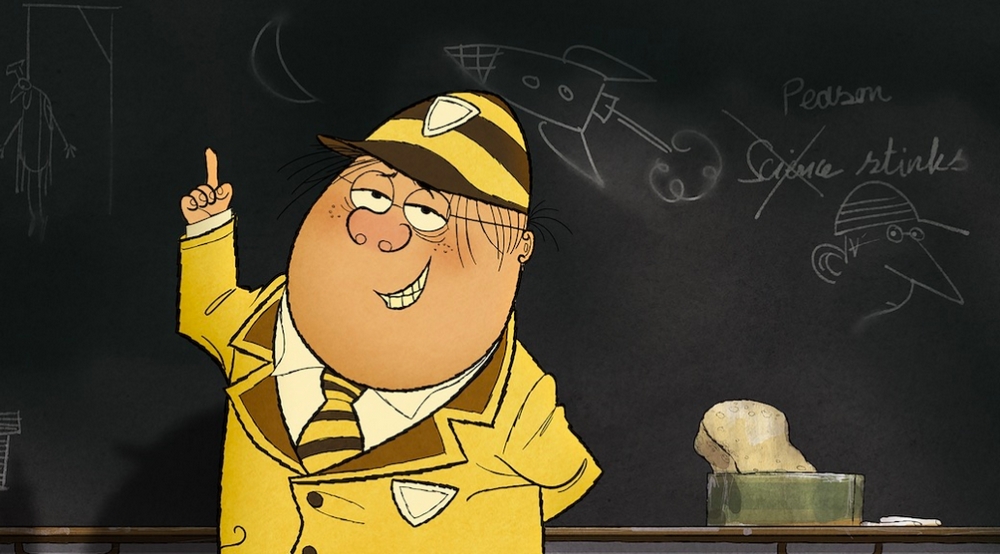 The late British illustrator Ronald Searle is considered a deity by most animators. He is best known for creating the series of books about St. Trinian and his collaboration with Geoffrey Willans on the Molesworth series. Now thanks to the acclaimed British studio Lupus Films, Melusine Productions in Luxembourg and Uli Meyer Studio (U.K.), one of his best-loved characters Molesworth is coming to big screen. The film, which is being directed by animation veteran Uli Meyer promises to be quite a wonderful sendup of British boys’ boarding schools and does a wonderful job of bringing Searle’s loose and expressive style to 2D animation.

During the pitch, Lupus founders Camilla Deakin and Ruth Fielding and Melusine’s Stephan Roelants talked about the origins of the project and shared a filmed interview with Meyer who discussed his love for Searle’s artistry. “I showed a 20-second St. Trinian animation I had made to Ronald, and he was excited about it. Unfortunately, the St. Trinian rights were sold to Ealing Studios for live-action movies, so I decided to adapt the Molesworth series because they were very popular at the time. His art has this easy and loose style, but it can be very difficult to do, and we had to come up with an inking style that would mimic his style for 2D animation.”

Fielding added, “The movie is a charming comedy caper, reminiscent of the Ealing comedies and Monsieur Hulot films. Although it is set in a British school during the ’50s, we think it’s quite universal because we have all been to school, and he does a wonderful send-up of them.” The film’s main character is Nigel Molesworth, a mischievous, self-confident schoolboy who has a penchant for power, will be voiced by popular British comic Matt Lucas (Little Britain, Alice in Wonderland) The script is written by Keiron Self and Giles New.

The Show Goes on at Cartoon Movie in Bordeaux
‘Onward’ Leads Mild Weekend; ‘Sonic’ & ‘Call of the Wild’ Keep to Top 5