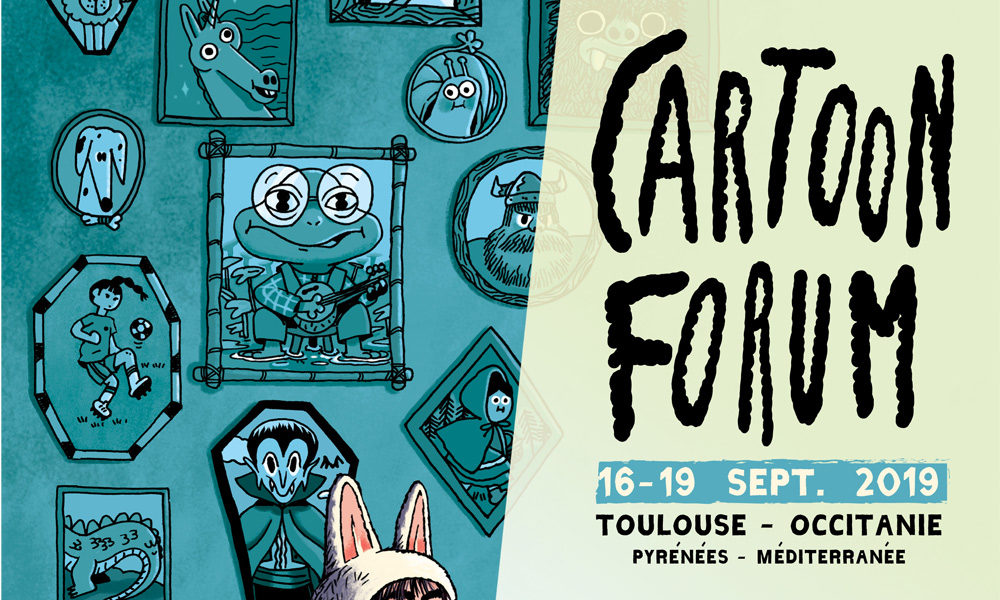 The high number of high-quality projects presented at this year’s Cartoon Forum in France signals the health of the European animation business.

Quick quiz: Which Euro event brings animation creators, execs and financing folks together for four jam-packed days in September? If you answered Cartoon Forum in Toulouse, France, then you know all about this wonderful pitching opportunity which was created in 1990 with the support of Europe’s MEDIA program. As a result of this annual event, European TV animation production has increased dramatically over the past two decades, and animated exports have become the top performers in the European audiovisual sectors.

This year’s edition promises to provide another great opportunity for participants to network and explore all the new and creative toons in development all over Europe. As Annick Maes, the always gracious director of Cartoon Forum, tells us: 130 projects from 21 countries were submitted this year, of which 83 were chosen to participate. “There is a huge diversity in terms of both graphic styles, content and nationalities,” she notes. “For the first time this year, we have Cyprus represented with a project. We also have a spotlight on Norwegian animation, with three new projects from that country, which we will highlight by screening trailers and participant interviews.”

It should come as no surprise that France is the country with the biggest number of projects. With 27 shows in the running, it is way ahead of all the other participating countries. U.K. is the second hotspot, with nine shows, followed closely by Germany with eight, Belgium with seven, and Spain with six animated projects being pitched. Finland and Italy are presenting three toons, while Canada, Greece, Hungary, Ireland, Serbia, Norway and the Ukraine have two, and Austria, Cyprus, Iceland, Luxembourg, Poland and South Korea are each pitching one show. 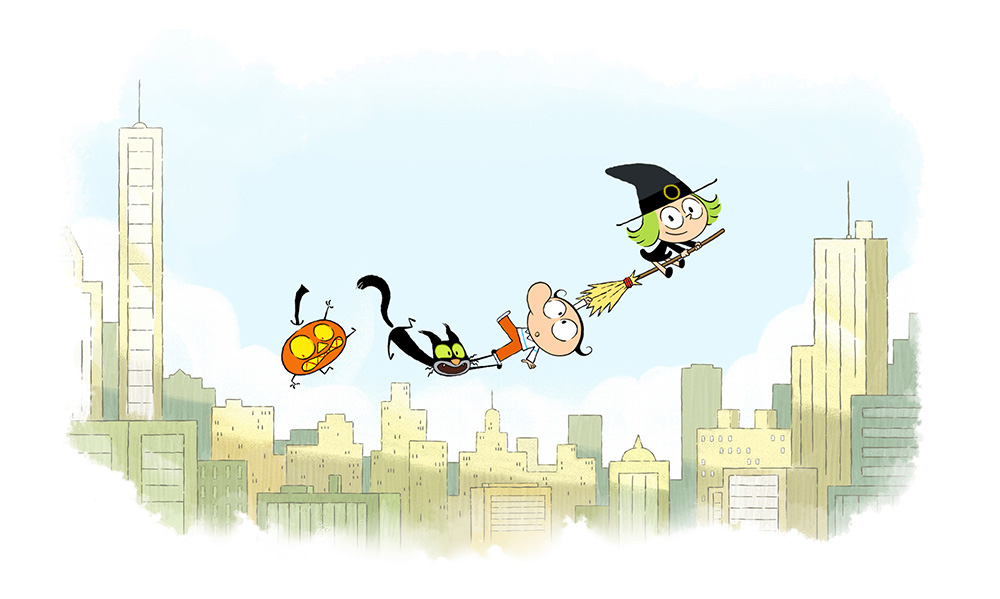 Zouk The Little Witch With A Big Personality

Maes says she encourages newcomers to be bold and daring with their presentation methods. “This year, we are asking the pitch participants to stand in front of the audience instead of sitting down,” she notes. “We think this will provide them with a better chance to deliver a better performance and interact with the audience. Because we are a boutique event, we are more accessible than bigger shows like MIPCOM, for example. As a newcomer, you have the same chance as the bigger, more established animation companies, and it all comes down to the quality of your show and your presentation.”

It has been especially gratifying for Maes and her team to see first-timers return to the Forum after getting their feet wet during previous years. “A very nice example is that this year we have two projects featured by creative teams that were introduced as part of our Cartoon Springboards initiative. They found producers for their shows, and they’re pitching them at the Forum this year.”

The event had registered about 905 attendees in early August, and Maes says more are expected to sign up in the next few weeks, but the organizers like to limit the number because they don’t want to get as big as some of the other TV animation events around the world. Looking back at her years with the Forum, she says she is proud of how the Forum has become a great ecosystem for developing and realizing animated projects for global audiences. “We know that European studio are working a lot,” she notes. “In fact, sometimes they can’t come to the Forum because they’re busy producing a show that they pitched at our event a few years ago. We are happy to have played a part in the overall health of our industry.” 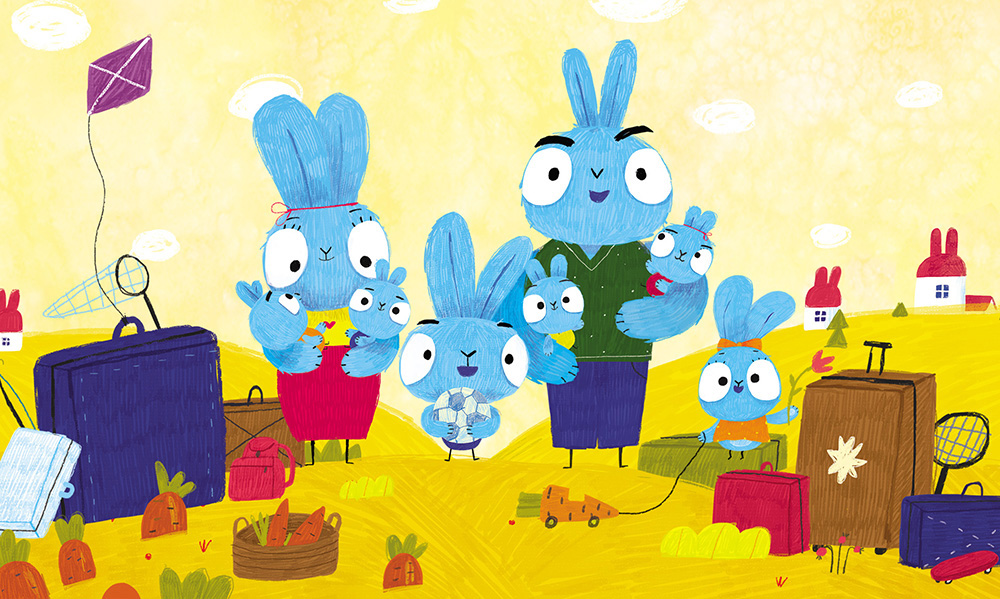 Stats at a Glance 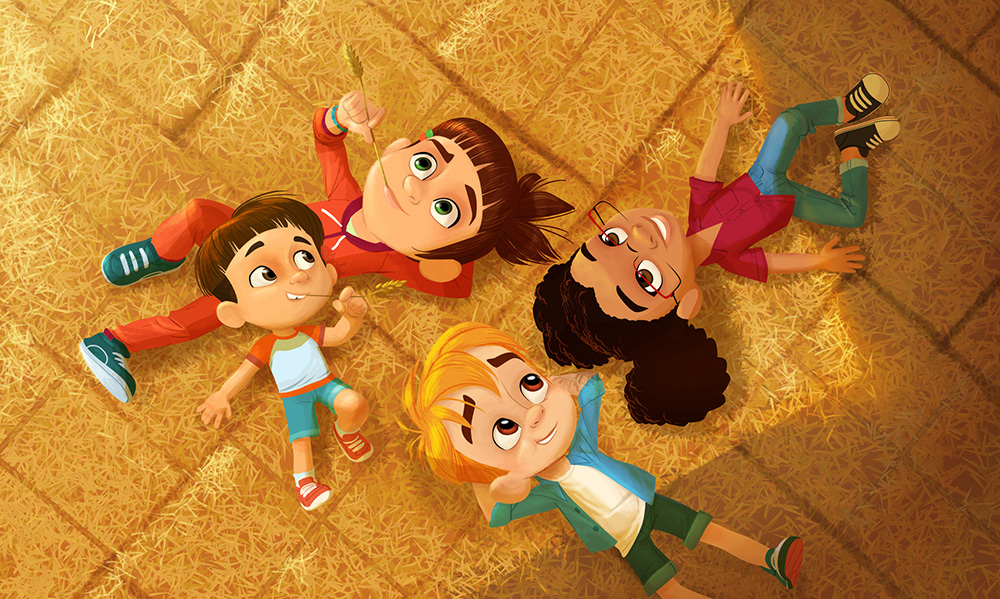 This charming, 2D-animated series about the adventures of an outgoing dog who lives in a town full of cats is based on a popular book by children’s author Tomi Ungerer. “This is the first time one of Tomi’s books has been adapted into an animated series,” says Genevieve Dexter, the show’s exec producer. “Like many of his works so much more than a fish out of water story. We are very lucky to have Nicole Paglia (Amazing World of Gumball story editor and 101 Dalmatian Street writer) as our script writer and bible development guru. Even more amazingly, we are working directly with Tomi and his daughter Aria on the visual adaptation and loved visiting Tomi’s studio in Ireland.” 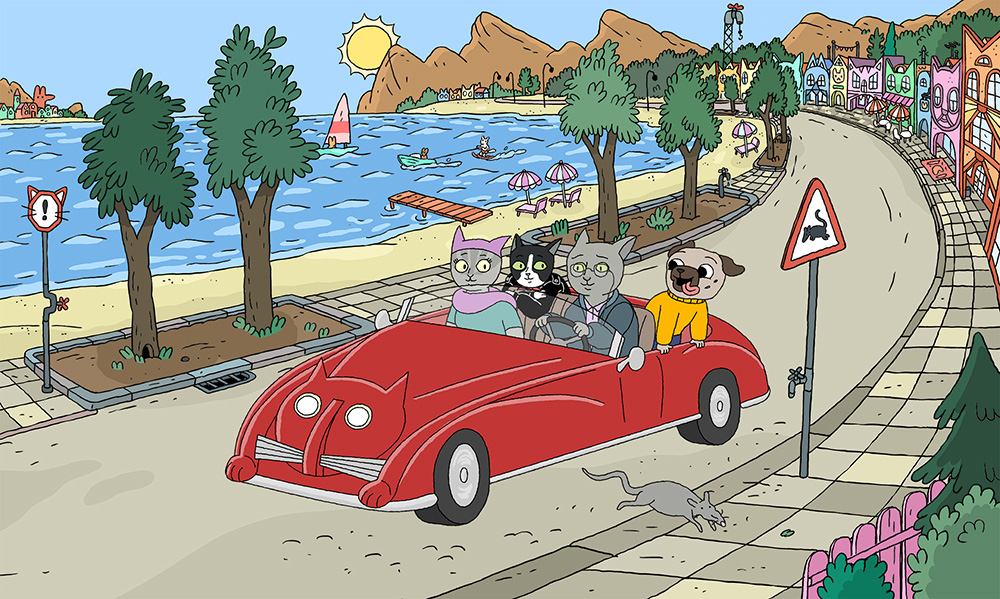 Dexter says they will use a blend of 2D and CG to produce the animation. “We have both pipelines in house and enjoy implementing them in creative ways. Our director Daniel Britt is working away on the pilot of Cartoon Forum, so it is all happening as I write … We believe that the blend between classic and modern writing and illustrative style has produced something I think is quite unique. Think Tintin meets Gumball!”

She also says that she loves the fact that the agenda at the Forum is different from other markets. “It successfully blends business people and creatives using a closely honed structure which encourages international co-production.  I also love the exhilarating process of live pitching and look forward to taking Flix to the stage with our exec producer Jules Coke and Aria in Toulouse.”

Friendship, acceptance and fun adventure are the three main ingredients of the beautiful new (26 x 7 min.) preschool show from AnimAlps, Nippon and Montblanc. This French-Japanese CG-animated co-pro centers on two friends who find themselves in all kinds of interesting situations as they teach younger viewers about getting along in the world despite our difference. “Chad the little wild monkey and Clark the pet dog form a fantastic pair,” says producer Fabrice Beau. “At the same time, becoming best friends, although they are worlds apart.” 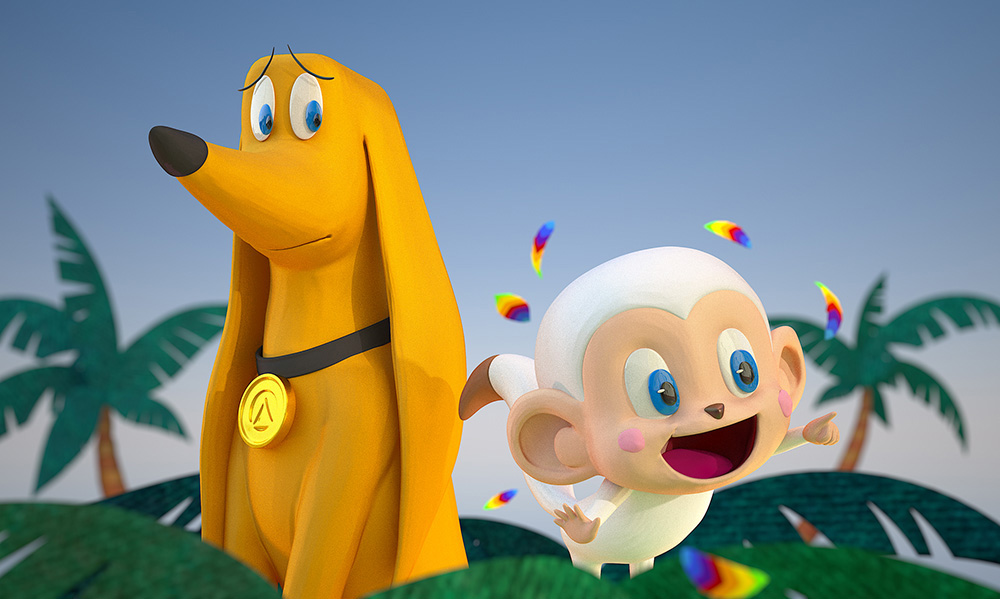 Beau adds that he believes in the project because of its humor, the tone of the characters and the amazing design. He is also a great fan of the Cartoon Forum. “When you have a project to pitch at the Forum, it’s a very helpful and exciting exercise,” he notes. “When you are just a spectator, it provides a wonderful way to see all the current trends and popular themes.”

The charming animal characters in Little Grey Wolfy know how to make the most ordinary days fun and exciting. The new Norwegian animated preschool project by Ulvenfilm is a 2D cut-out show, created with Moho software, that celebrates its traditionalism.

“Appreciation of good old familiarities of children’s animation is what makes this show stand out,” says director and producer Natalia Malykhina. “The characters are recognizable and dear to every child. The ideas of a children’s shows are traditional: kindness, friendship, loyalty and good humor. I think many children’s animations over-excite them and therefore have a negative impact on children’s behavior and psychological well-being. As a parent, I am sure it’s important to think not only about the commercial side of the project, but also about its psychological impact on the target audience.” 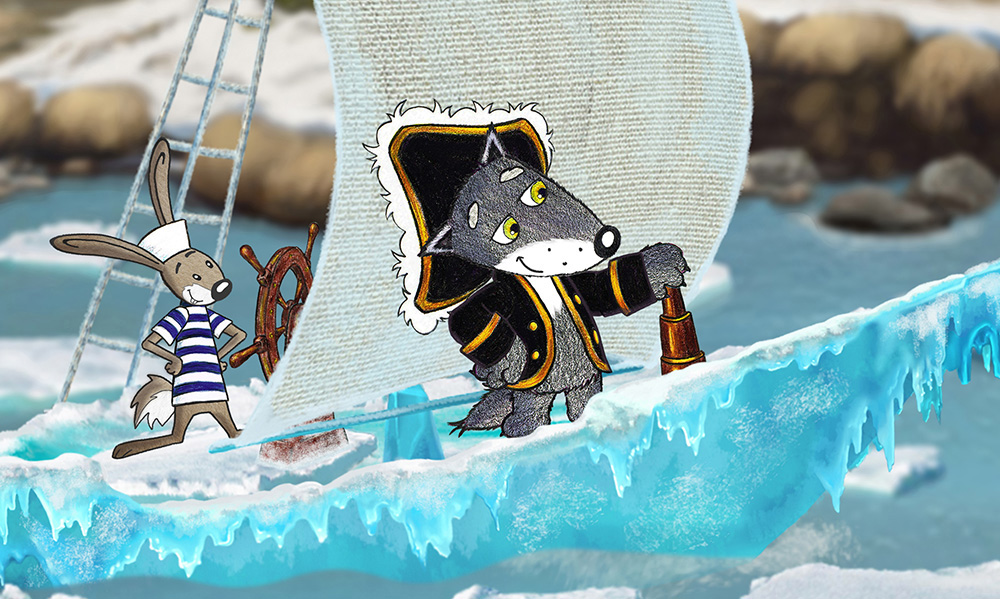 Malykhina originally started the series as a short, and later developed it into a four-part miniseries, with each episode focusing on a season. “I feel that the project has more potential,” she says. “New stories continue to emerge. A wonderful universe has been built, where the heroes carry on with their lives beyond the credits. They have more stories to tell, and I believe the TV series format will provide them with the opportunity to do so.”

Cartoon Forum will be Malykhina’s first major pitching experience. “I hope it will give my Little Grey Wolfy a good start in the big world of production, taking it to the next level. It’s very inspiring that not only big studios and experienced producers with their big projects can participate, but newcomers such as my Little Wolfy and I are also welcome.”

Preschoolers can never get enough of prehistoric animals! That’s why Big Lizard, the new CG-animated show by U.K.’s Beakus, might have a bright future ahead. The series finds a young girl and her astronaut dad marooned on a prehistoric planet where they meet a variety of strange and wonderful beasts from the Devonian period.

Producer Steve Smith says he is big on designer/director Amaël Isnard’s unique style. “He works across 2D and 3D and, over the past few years, he has developed a hybrid style with plasticine that just looks amazing. Everyone I’ve shown Big Lizard to has had a very positive response to the style, and it’s what first drew me to the project. The concept for Big Lizard is equally beguiling. It’s way more than an entertainment show, mixing elements of science and technology, history and natural science and evolution theory.” 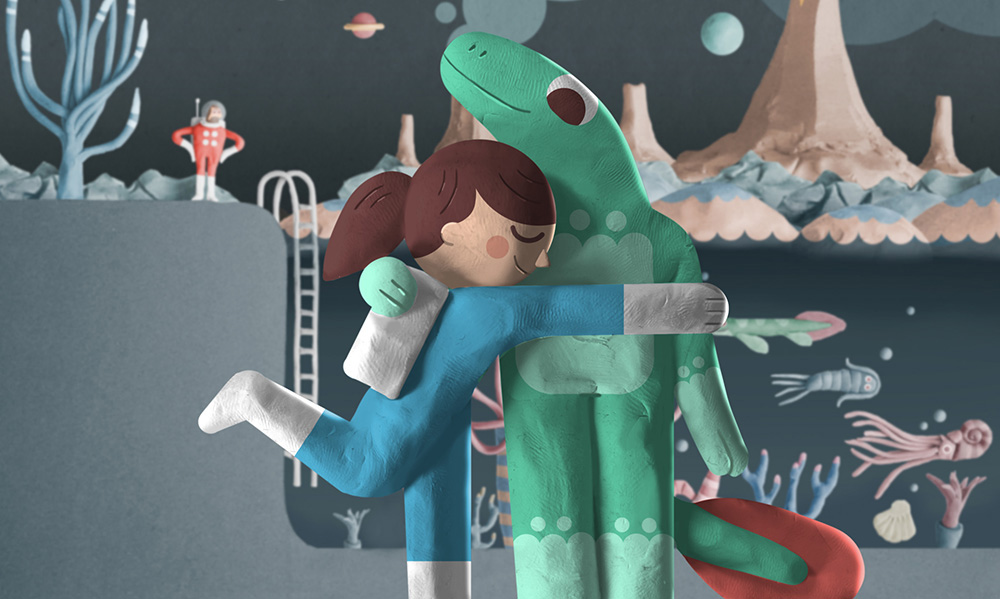 Smith says the show is also empowering, especially for its portrayal of a strong, confident girl who is able to make a life for herself in a new world. “She also has an interest in science and engineering, inspired by her dad, and of course she’s an astronaut! So what’s not to love?!”

When asked about the current toon business, Smith admits that it’s a very competitive world out there. But he points out: “Ideas that are strong will always shine through and, I believe, get picked up. There’s no shortage of platforms for content, but they’re always changing their focus, and on top of that we have to compete with larger outfits and broadcasters in-house production. But I’m very optimistic about our future, as long as ideas are king!”