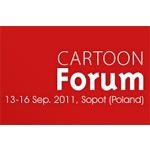 The European Assoc. of Animation Films has announced the nominees for its 2011 Cartoon Tributes, to be held at this year’s Cartoon Forum in Poland. Over 700 professionals from across Europe will select the companies that have supported the industry’s growth over the past year. Companies from France, Ireland, Britain, Germany, Luxembourg, Switzerland and The Netherlands are among this year’s nominees, underscoring the growing interest in animation from countries across the continent.

The winners will be announced at the next edition of Cartoon Forum, to be held from 13-16 September in the Polish city of Sopot, where the nominated companies will also have an active presence. In this new edition the European forum for co-productions of animated series will showcase 66 new projects with a global investment of 214.5 million EUR and 467 hours of production.

The Cartoon Tributes 2011 nominees are: