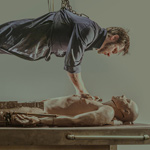 The National Film Board of Canada returns to Cannes for a second year, with Patrick Bouchard’s animated short The Subject (Le Sujet) selected for the 50th Directors Fortnight (May 9-19), organized by the French Directors’ Guild. The stop-motion anatomy of an artist, produced by Julie Roy for NFB’s French Animation Studio, will go on to screen in competition at Annecy (June 11-16).

“Patrick Bouchard’s The Subject perfectly encapsulates production at the NFB’s animation studios. Supporting an author (in this case, for the fifth time) by placing our full trust in him and giving him free rein in terms of the creative process — as it turned out, a process as risky as it was out of the ordinary — has resulted in a work that pushes the boundaries of animated cinema,” said Roy. “We are very gratified that the Directors’ Fortnight recognizes the value of such a process.”

In the 10-minute piece, an animator dissects his own body, extracting memories, emotions and fears that will nurture his work. As he cuts into his skin, various symbolic objects recalling his past emerge. Reaching the heart, he succeeds in identifying the burden he’s been dying to cast off.

The most intimate work from Bouchard (Bydio, The Brainwashers, Subservience), the short also features a soundtrack written by the hands-on director. The Subject has set and props by Dany Bolvin, offline editing by Sacha Ratcliffe and Theodore Ushev and sound design by Olivier Calvert.

The Subject (Trailer 32sec) from NFB/marketing on Vimeo.