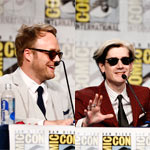 Adult Swim is returning to San Diego Comic-Con, and once more upping the fan experience ante as they are wont to do! For 2018, the network is putting a unique spin on a favorite summer pastime as they turn the park behind the Convention Center into an 18-and-over campground jamboree! This is in addition to the celeb-filled show panels and cast/creator signings planned to keep AS fans happy campers all through the Con.

From Thursday through Sunday, campers can experience Adult Swim’s version of wholesome outdoors activity behind the Convention Center at 5th Ave. Landing and Convention Way, day and night — with free admittance. Register for park access at AdultSwimPresents.com.

Amenities of the park include all-new games like canoe races and archery contests, chainsaw-wielding wood carvers, merit badges and tasty eats from the hot dog roaster. Provided by State Farm, lockers will be on site to keep fans’ stuff safe while they make the most of their camp experience and earn collectible merit badges along the way. The Badge Badger and State Farm brand ambassadors will be awarding badges to stand-out campers who are best prepared for the con (think: sunscreen and hydration!). Plus, the new Camp Store (open late) will be packed with exclusive AS merch available only to SDCC badge holders.

Fans in the park and around the country on AdultSwim.com can catch live broadcasts of streaming series like FishCenter, Stupid Morning Bullshit and Williams Street Swap Shop (starting at 3 p.m. PT, Thurs.-Sun.) featuring surprise celebrity stop-ins.

When the sun goes down, Nighttime on the Green returns with free screenings and activities (Thurs.-Sat.). This includes the latest episodes and pilots, the yummy S’mores Station (featuring fun-sized Snickers) and access to special talent. Snickers is also presenting the #Rickmobile all week long throughout San Diego — track the mobile pop-up shop’s stops via social media to plan your big Rick and Morty merch shopping spree.

8:00 p.m. – AS Cosplay Competition Hosted by Henry Zebrowski – We invite cosplayers to show off their inspired creations, don their best Adult Swim themed garb and strut their stuff! Awards will be passed out and bragging rights will last a lifetime.

7:15 p.m. – Toonami Pre-Flight to with TOM and SARA – Get behind-the-scenes info from show hosts Jason DeMarco and Gill Austin, Steve Blum (voice of TOM) and Dana Swanson (voice of SARA).

8:15 p.m. – The Pillows Live In Concert – A event not to be missed! Special live concert to celebrate the new seasons of FLCL.

10:00 p.m. – Rick and Morty Fan Event – The fan favorite show is back for a special event! Admission is extremely limited so fans should register at AdultSwimPresents.com for details on how to receive event wristbands.