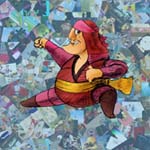 Two festivals on opposite sides of the planet are looking for animated film submissions.

Up first is the third edition of the  International Festival of Animated Films TOFUZI 2011, which will be held Nov. 2-5 in Batumi, Georgia.

The festival this year will offer prizes in the following categories:

Deadline for submitting is Aug. 31. Full details can be found online at www.adf.ge.

A July 29 deadline looms for the  ANIMAGE – III International Festival of Animated Film of Pernambuco in Brazil. The festival will screen its films free to an estimated audience of 8.000 people from Sept. 30-Oct. 7 in the city of Recife, Brazil.

The competitive exhibition will distribute cash prizes and trophies for the best films in four categories:

Trophies also will be given out for

Besides the films, the event offers lectures, roundtables and a new round of animation techniques workshops. Information on attending the event and submitting can be found online at www.animagefestival.com.