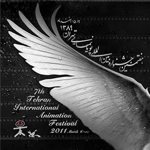 Deadlines are rapidly approaching for a pair of far-flung and fascinating film festivals looking for animated submissions.

Up first is the 7th edition of the Tehran International Animation Festival, which will be held March 6-10 in Tehran, Iran. Deadline for submissions is now Dec. 25, with full details available on the festival’s website at www.tehran-animafest.ir.

And you’ve got until Dec. 31 to submit for the 10th annual Anifest, set for April 26-May 1 in the Czech Republic.

Films must have been produced after Jan. 1, 2009. Details on entering can be found line at www.anifest.cz.