After months of award season campaigns, Disney claimed the top two animation prizes on Sunday night with a win for Pixar’s Brave in the Best Animated Feature category and Paperman in the Best Animated Short race. Directors Mark Andrews and Brenda Chapman accepted the award for Brave, while first-time helmer John Kahrs accepted the honor for his animated short. The win for Brave is Pixar’s seventh Best Animated Feature Oscar since the category was first introduced in 2001.

Brave, which faced tough competition from Wreck-It Ralph, Frankenweenie and ParaNorman, was a departure for Pixar as it was the first feature centered on a strong female character.

“Making these things is a struggle … It’s a huge organic process and a delicate process along every step of the way,” Andrews said backstage. “Hopefully by the end, you have something really special and in Brave’s case, I think we managed to pull that off,” he added.

Chapman who was replaced by Andrews in 2010 due to creative differences, was asked backstage whether the Oscar had made her feel better about her role in the film. Chapman said:

“Absolutely. It says a lot for me.” 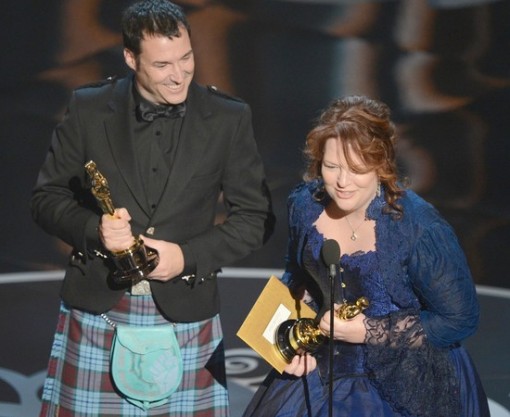 As many expected, the Oscar for best visual effects was handed out to Ang Lee’s Life of Pi, which has dazzled audiences with its realistic depiction of CG animals (such as the Bengal tiger named Richard Parker), ocean waves, an island inhabited by meerkats and jaw-dropping storms. It has been a bittersweet victory for Rhythm & Hues, which was also honored with the top VES Award for its work on the movie, and now faces dire financial times. The company, which filed for Chapter 11 backruptcy protection this month, was thanked by vfx artist Bill Westenhofer, as he accepted the Oscar for Achievement in Visual Effects.

“We’re not technicians … we’re artists, and if we don’t do something to change the business model, we might lose some of the artistry,” Westenhofer told the press backstage at the Academy Awards. “We are hopeful that we can pull through the bankruptcy, but it is a concern,” he said. “Visual effects are definitely in a challenging position right now; it’s not something that’s being done by someone pushing buttons. Right now, we have to do something.”

On Sunday afternoon, hundreds of special-effects professionals protested in Hollywood to demand an end to subsidies that benefit foreign fx houses. 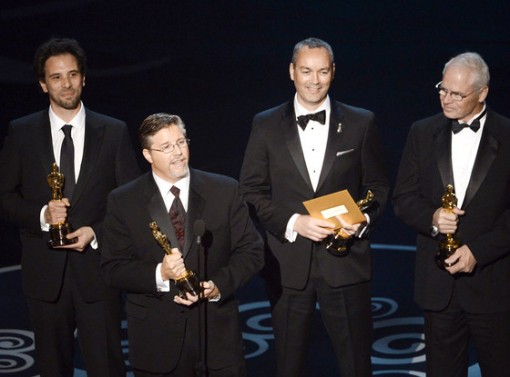 Bill Westenhofer accepts the Oscar for Achievement in Visual Effects.