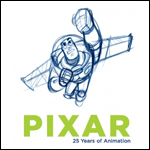 Chronicle Books and Pixar Animation Studios have announced the release of a 208-page softcover catalog for an upcoming exhibit titled Pixar: 25 Years of Animation that goes deep into the creative process behind the studio’s films.

The illustrated, full-color catalog documents an exhibition that will open July 31 at the Oakland Museum of California and run through Jan. 9. The catalog includes reproductions of drawings, sculptures, paintings and other artworks that are used in Pixar’s development process.

The exhibit has been expanded since it first began touring the world in 2005. It now features more than 500 works and includes artifacts that connect Pixar’s work to California’s pioneering role developing photography, motion pictures and animation.

The catalog includes an introduction by John Lasseter and Ed Catmull and is available exclusively at the OCMA store and through its website at www.museumca.org for the price of $29.95.